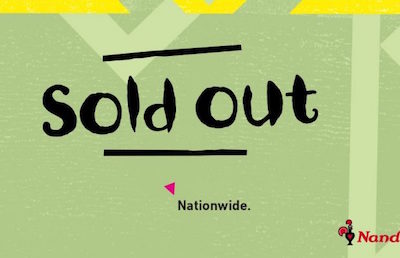 South Africa’s President Jacob Zuma put us all through an emotional wringer last week and our country did not deserve it.

The rollercoaster ride started with the unceremonious recall of former (I say this with deep regret and worry for my country) finance minister, Pravin Gordhan, from an international roadshow intended to shore up international perceptions of the South African economy (see my post on initial responses to the recall here).

This move however was merely the precursor to a dramatic clean sweep of all non-Zuma supporters from the South African government cabinet. Performance was not taken into account when doling out positions during the cabinet reshuffle; only fealty was. Needless to say, our president, cynically playing with the lives of millions, had the total opposite effect to promoting an air of stability and economic attractiveness. Our country has subsequently been downgraded to junk status, making all of our lives more difficult, especially those of the most vulnerable in society, his main constituency.

South Africans have been left aghast at the latest attempt to undermine our democracy in the interests of rent seekers (a political science term used to describe political actors who seek to make money off the state rather than work to create new wealth) masquerading as agents of “radical economic transformation”. We’re left asking ourselves, “Has he succeeded this time in truly capturing the South African state? If so, what is there to be done about it?”.

“We’re left asking ourselves, ‘Has he succeeded this time in truly capturing the South African state? If so, what is there to be done about it?’.”

While we still try to make sense of the political coup that took place in plain view, I thought it worth unpacking the initial responses to the cabinet reshuffle to help put things into perspective. For example, what is clear from the data below is that the rent seeking, extreme black nationalist minority that supports Zuma’s actions is indeed a lone voice. The majority of South Africans (on Twitter and in real life as we’ve seen from the subsequent marches) are incensed by his actions, regardless of race or ideology.

The annual State of the Nation Address (see my analysis of this year’s SONA here) continues to hold the title of most tweets generated by a political event but the cabinet reshuffle volumes are still substantial, representing perhaps the second highest of the political events that I have measured so far this year (and if we look at the discussions that are still happening as I type this, the volumes exceed SONA). This is what the conversation map (a.k.a. interaction network) around these tweets looks like: 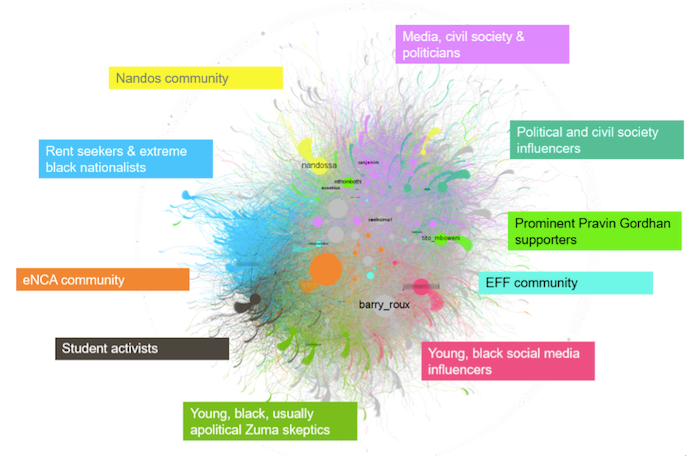 Interaction network highlighting the main communities discussing the cabinet reshuffle. Users are connected together when they interact with each other via retweets or @mentions. The Louvain modularity algorithm is used to identify the distinct communities involved and the top 10 are highlighted in colour. 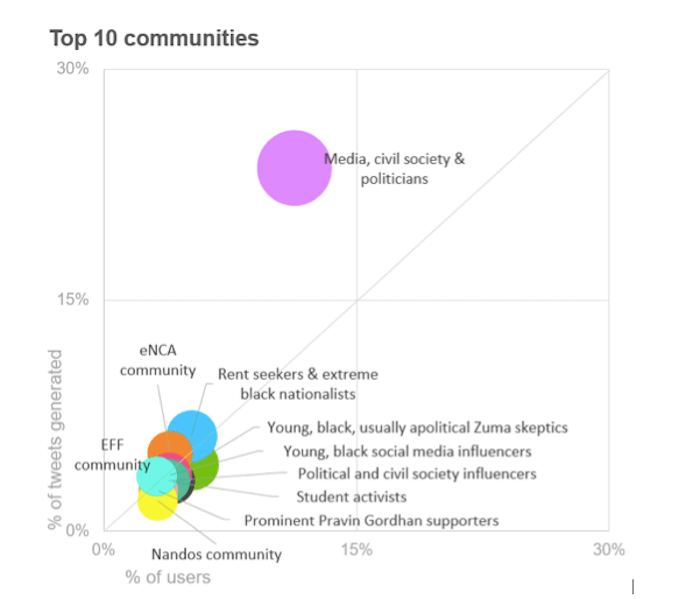 One community stands out from all the rest in our data. I’ve labelled this single largest group of users as the ‘Media, civil society & politicians’ community. It contains 11% of unique users in our data and it is outraged by Zuma’s political machinations. Prominent influencers include the media who are reporting on events, various civil society groups and politicians. This is the face of ordinary South Africa up in arms and, while this community already dwarfs all others in size in our data, it still managed to produce a massive quarter (24%) of all tweets about the cabinet reshuffle, demonstrating how passionately they feel about the events unfolding.

Here are the three most retweeted tweets from this community: 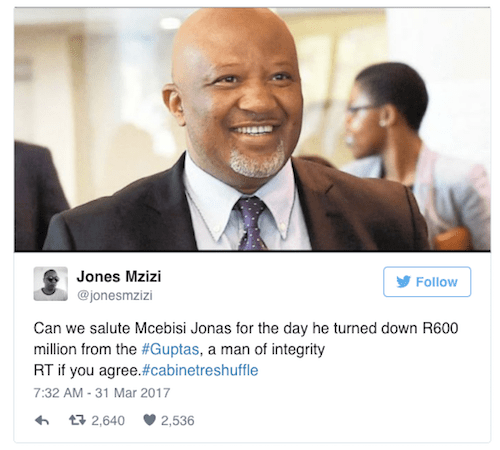 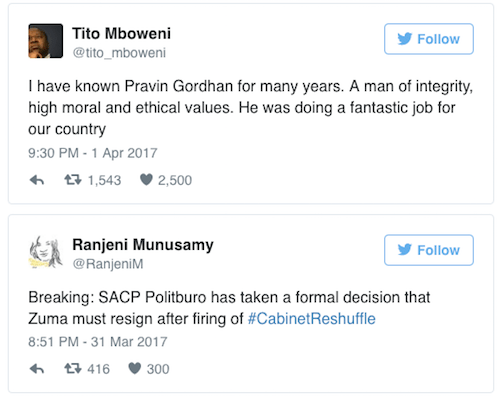 The second largest community in the data (5.3% of unique users) was one that I hadn’t seen before. Usually the same groups appear in most political datasets that I look at however this is a new community for me. Based on some cursory digging into who their influencers are and the type of content that resonates with them, I decided to label them Young, black, usually apolitical Zuma skeptics.

It is my hypothesis that these are young South Africans who are usually more likely to comment on what Bonang Matheba is wearing or the new Casper Nyovest single than on political events in our country; However, here they are discussing the cabinet reshuffle. Much of their comments are relatively superficial though, made up of entertaining memes making fun of Zuma and his allies (especially former sports minister Fikile Mbalula’s new role as police minister). This shows that even the usually politically unengaged have been pulled into current events, although at a somewhat more surface level in the case of this community.

These are the top retweets from the community: 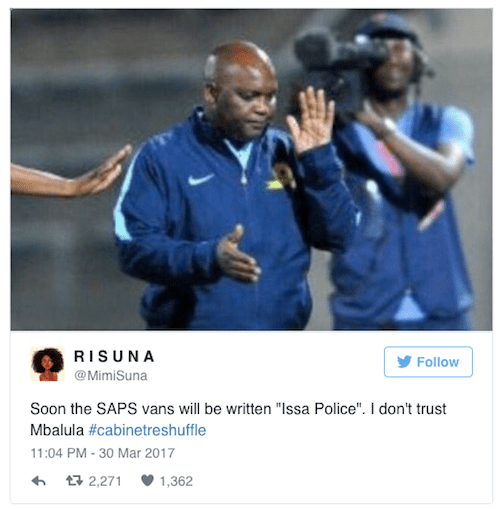 As already mentioned, the vast majority of Twitter users were extremely critical of Zuma’s actions, to say the least. However, the president and his allies have successfully cultivated an alternative narrative over the past year, thanks largely to the help of UK-based PR firm, Bell Pottinger, and their under-handed methods for creating an alternative, populist, race-based narrative that has introduced terms such as “white monopoly capital” into our national lexicon.

This alternative narrative is incubated and supported within the top-left blue community in the first conversation map above. The community has the third largest number of unique users in our data (5.2%). It is made up by a mix of rent seekers and extreme black nationalists who believe that South Africa, and everything in it, belong solely to black South Africans and who harbour a deep resentment towards whites over apartheid. There’s no denying that this latter group of community members has many legitimate historical and current issues to draw on as fuel for their anger; a fact that the rent seekers have effectively used to stoke populist rage.

This pro-Zuma community is made up of the usual actors including the various BLF, Manyi and Gupta media vehicles. Of interest (or concern) is musician AKA’s support for this community’s narrative. AKA is one of the most popular musicians in our country which gives him a unique platform for connecting with the youth. That he uses this platform to push a populist, race-based narrative is concerning. Others have criticised him for his partisan views, implying that he is paid to espouse them (although this is uncorroborated).

The top retweeted tweets within this community were all from Tebogo Ditshego, judge on SABC1 show, One Day Leader, author and businessman: 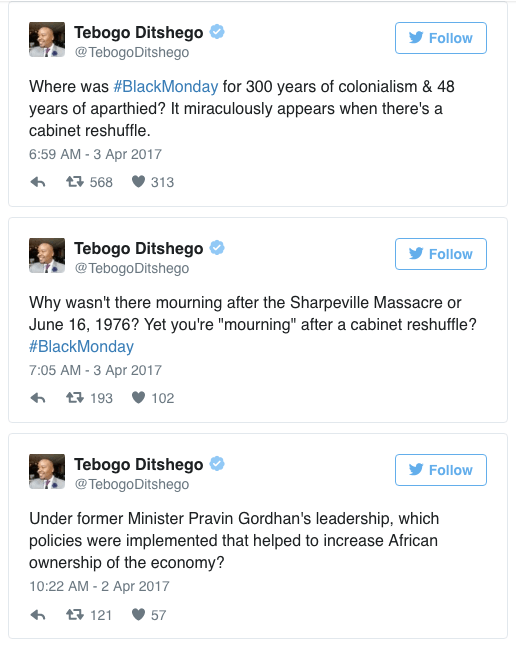 … and here are a few more popular tweets from other prominent users within this community:

But who still has a job though? //t.co/r3GiBLzZI7

Pravin Gordhan was good for the economy & its white monopoly capital …. Your Oppenheimers. Your masters of mankind.

Other sizeable communities interpreted the cabinet reshuffle through the lens of their own ideologies but each was similarly critical of Zuma’s actions overall. These communities included such diverse groups as student activists associated with ‘Woke Twitter’ and Fees Must Fall; socialist leaning, EFF-aligned users; up and coming young, black social media influencers; and apartheid activists and politicians in the Mandela- and Mbeki-eras such as Jay Naidoo and Tito Mboweni.

Here are a few noteworthy tweets from these communities: 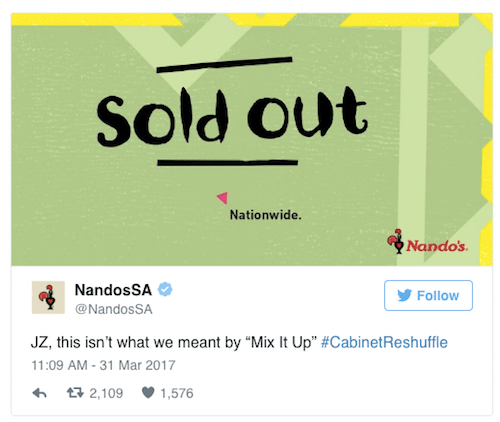 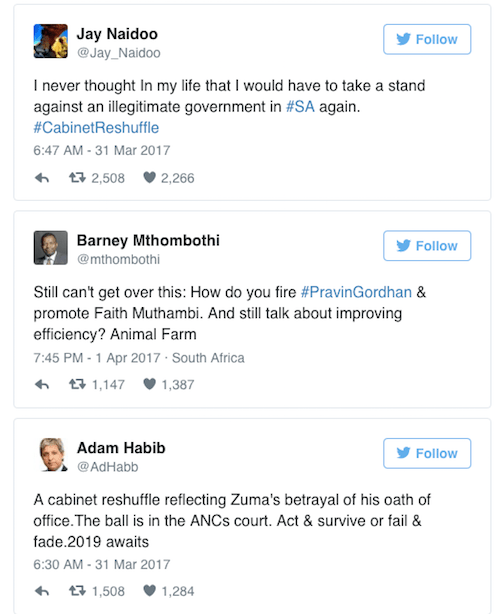 So, to summarise, South Africans generated MANY tweets about the cabinet reshuffle in the first four days after the event. We have vocalised an overwhelming condemnation of the president’s latest actions to undermine our country; that is, with the exception of a vocal minority. Rent seeking populists have successfully tapped into a minority of disaffected South Africans by offering them a convenient scapegoat for their anger in the form of ‘white monopoly capital’ (the beautifully torturous irony is that this scapegoat was allegedly defined while members of the Zuma-Gupta camp sat around a boardroom table with a UK-based PR firm).

As I’ve said before, in a more even-handed environment, many of this community’s concerns would be valid and worth investigating, but when these issues are weaponised in the interest of politics, power and self-enrichment, all ability to debate and transform is lost. If this group were sincere in its agenda, we would all be working towards getting our house in order by weeding out corruption through the transparent promotion of good governance and strong institutions. The exact opposite is clearly happening here.

Once again, our country finds itself at a cross-roads. Surely, this is the tipping point? How much more can we take? As a country, we’ve already proven that we can put up with a lot more than anyone would have expected (except perhaps for our president).

Where are we now South Africa?