Combustible: The new politics of branding 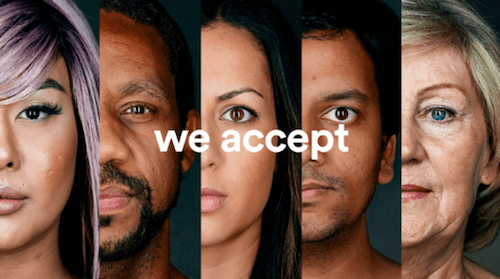 In the current combustible political climate, brands (and their CEOs) find themselves thrust into the centre of the political arena. While this post relates to the Donald Trump situation in the US, the parallels to the South African context are striking.

Immigrant travel bans, LGBTQ rights, healthcare access, climate change and other pressing issues are stirring brands to find their voice. Some choose to take a stand on a value they hold true. Others prefer to use their power to unite.

In the following article, Kantar Added Value’s executive vice president of Branding and Sustainable Innovation, Leslie Pascaud, and brand strategist, Teiko Uyekawa, outline four key considerations brands in the United States must weigh when thinking about taking a position on any given political issue, along with examples of how this is being done more and less effectively.

As the political climate continues to grow more divisive, brands are getting thrust into the middle of debates many would prefer to avoid. In January, Toyota was attacked for expanding in Mexico to sell more vehicles to Americans. More recently, Nordstrom experienced whiplash for dropping Ivanka Trump’s clothing line.

Corporations and brands typically like to remain apolitical. But in this highly polarised, culturally-charged and social-mediatised moment, where people expect their brands to represent them and their values, can brands sidestep politics entirely?

Saying and doing nothing can unintentionally send a message to stakeholders, employees and consumers that the company or brand is indifferent to the issue at hand. And many of the issues being raised have direct implications for businesses.

Brands and their CEOs, often the most concrete manifestations of a brand, are having their actions, announcements and affiliations put under the microscope like never before.

The recent executive order regarding the immigrant travel ban and the rhetoric around it is a case in point. The ban, which took place a week prior to the Super Bowl, resulted in brands wading deeply into political waters on both sides of the aisle. From celebration of Mexican avocados to a rerun of Coke’s ‘it’s beautiful’ campaign, immigration was all the rage … literally.

Take Anheuser-Busch: Although the American immigrant story of the founder Adolphus Busch was apparently in the works for months prior to the travel ban, its airing led to a call for boycott by those who felt the ad was overtly political.

84 Lumber, a relatively unknown building supply company, ran ‘the Journey’, an ad considered so political by FOX that they refused to air the long version. The edited teaser, which suggested that viewers check out the full story on their website, crashed their site as six million attempts were made during the first hour to view the entire ad. The ensuing debate pitted the company’s intention to ‘symbolise the grit, dedication and sacrifice’ of their employees with anger at the promotion of illegal immigration.

With so much contestation on both sides, it can seem like there is no right way for brands to take part in the conversation without fear of reprisal. We at Kantar Added Value don’t believe things are quite that black and white. A brand’s decision on whether to take a bold stand, try to reconcile opposing points of view or stay entirely out of the fray will quite naturally depend on who that brand is. It’s not about politics. It’s about Purpose. 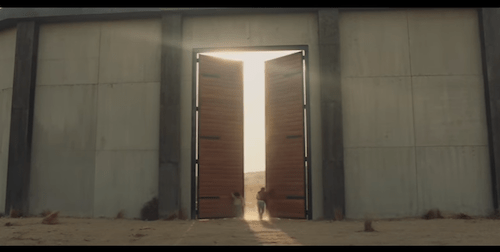 Airbnb’s campaign #weaccept, which explicitly promoted diversity and acceptance, aired during the same Super Bowl as the controversial ads mentioned above. Yet it, along with their initiative to provide short-term housing for displaced people in need, was mostly met with praise. Sure, a few Twitter trolls expressed outrage at what they deemed a ‘politically charged’ message. But all in all, Airbnb got off relatively unscathed. Why?

For one, this pioneer in the sharing economy has built its entire brand around the idea of belonging and community. It therefore was perfectly coherent to see them take a stand against an order that runs counter to everything they stand for. And Airbnb’s young urban cosmopolitan target would expect no less.

Of course, in any situation, brand owners will want to measure the risks and rewards of speaking up. But risk mitigation isn’t as simple as it used to be. With the rise of social media and real-time communications, brands are expected to behave more like humans.

And humans don’t just do what they think will maximise their ROI in the short term. Their behaviours are rooted in values and personality and so should any brand worth its EPS be. Brands, like humans, need to know what they stand for. The clearer a brand is about its raison d’être, the easier it will be to align quickly and convincingly on a course of action.

A brand’s position on a given issue should weigh four key considerations:

1. The brand’s core/most loyal customers: who are they and what matters to them?

If you are Hobby Lobby, your right-leaning consumers will be expecting you to stand up for family values, just as a Ben & Jerry’s core consumer will be sensitive to climate change issues.

Some brands don’t know where their consumers stand until they find out the hard way. When Uber chose not to hold up the one-hour taxi strike at JFK airport during the height of the airport protests, their users were enraged. When it then came to light that Uber CEO, Travis Kalanick, was also a member of President Trump’s economic advisory committee, the #deleteUber movement on Twitter was born.

Uber, a brand that has successfully positioned themselves as ‘your private driver’ is increasingly out of sync with the cultural moment- evoking elitism and selfishness vs. Lyft whose purpose is to be ‘your friend with a car’. Both drivers and passengers appear to increasingly prefer the latter mindset.

Brands must also be forward thinking about their consumer base. Earlier this year, a Fox News radio host dubbed Chick-fil-A “the official chicken of Jesus“. The company’s CEO, who previously took a strong stand against same sex marriage, now seeks to expand northward to NY and other left leaning cities. Consumers and employees in these zipcodes have different attitudes and affiliations, thus requiring a rethink on brand targeting.

2. The brand’s values: what is most important to the brand?

What does it stand for and what would it be willing to fight for? There was a time when brands didn’t need to know the answer to these questions. No longer. CVS, the pharmacy brand that took the first strong stand against tobacco, logically stood up for affordable care.

Patagonia and Black Diamond, long-time supporters of environmental protection, are publicly appealing to the entire outdoors industry to move their trade show out of Utah State, if its leaders continue to support Republican efforts in Congress to transfer or sell federal lands to states. For brands with strong values, doing nothing, or even taking a tepid position, is not an option.

3. The brand’s competencies: Where does the brand have expertise that might be applied to or provide perspective on the issue at hand?

A recent report by Weber Shandwick, entitled ‘The Dawn of CEO Activism’, found that people saw CEOs more favourably if they took a public stance on current issues — as long as the topic was related to the company’s business. (If it wasn’t, the numbers reversed).

In this vein, Mark Weinberger, CEO of EY, has offered his company’s expertise to ‘educate’ President Trump on all things related to job creation in the US. Nike, a brand that has promoted women’s participation in sports for two decades, is addressing the Muslim issue from a different angle: their recent launch of a lightweight, highly wearable hijab that doesn’t come untucked when working out or during competitions, is intended to reach a growing market of Muslim shoppers.

Another global brand, IKEA, working through its foundation, has developed refugee shelters made from recycled plastic that can be easily assembled in just a few hours (see innovation section for details). Interestingly, IKEA’s DIY expertise has been hijacked by designers seeking to make an anti-Muslim ban statement via a tongue-in-cheek ad for a “Börder Wåll“, offering a fake flat-pack wall, sold with 5 659 344 screws, and a single allen wrench, for a bargain price of : $9 999 999 999.99.

A brand’s willingness to get out in front on contentious topics should reflect its placement on the spectrum of boldness. Is the brand an Innocent or a Nurturer, in which case it will likely avoid direct conflict? Or is it a Hero, willing to fight for what is right?

Starbucks CEO, Howard Schultz, was one of the first to speak out against the immigrant travel ban with zeal, announcing a decision to employ 10 000 refugees in protest. While the press has suggested that Starbucks is risking business, Kantar Millward Brown (full disclosure – sister Kantar company) reported last week that there has been no substantive impact on any key performance metrics.

Jeep, more of an Explorer brand, decided to straddle the fence with their ‘Free to Be,’ campaign, launched around the final presidential debate last year. The campaign featured a split screen showing their latest models half in red, half in blue, delivering a message of unification that cut across party lines. To showcase the parallel park assist, one ad proposed to help you “position yourself between two sides”. Lane departure warning ads reminded you that “The left and the right are closer than you think”. 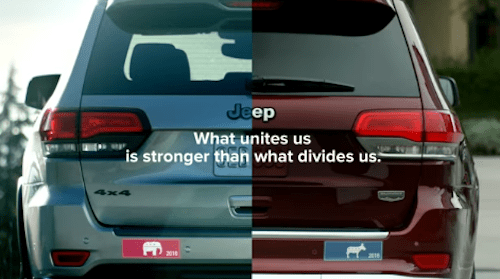 It could be argued that such an attempt to rise above the divisive rhetoric and avoid taking sides is too safe … that such an approach isn’t bold enough to stand out. But the real question is whether the brand is acting in a way that is coherent with what you know, love and expect from it. And whether it is aligning with the core values of its target. Because the only thing worse for a brand today than being invisible is to be inauthentic or irrelevant.