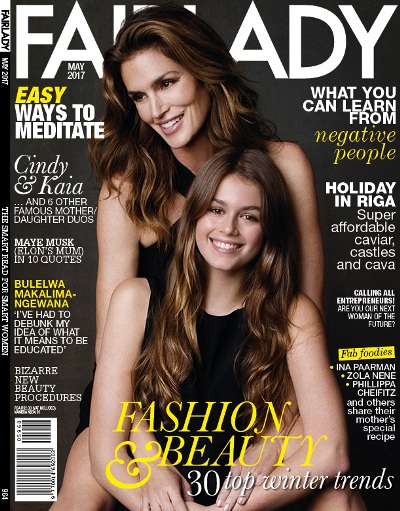 Entries now open for 2017 FAIRLADY Women of the Future Awards. Hunter’s introduces EDGE. View an Oscar winning film, The Salesman. The Republic of Gupta book to be launched.

Entries now open for 2017 FAIRLADY Women of the Future Awards

FAIRLADY, in partnership with Santam, is once again calling for female entrepreneurs who are making waves in the South African small business landscape to enter the FAIRLADY WOMEN OF THE FUTURE 2017 Awards. Two outstanding women will be honoured with great prizes in two prestigious categories: the FAIRLADY Woman of the Future 2017 and the FAIRLADY Rising Star 2017.

“I can’t wait to see what our entrants have come up with this year: the FAIRLADY Women of the Future competition really confirms our belief in the economic future in South Africa: the women will find a way,” says Suzy Brokensha, FAIRLADY editor.

The FAIRLADY Woman of the Future 2017 award goes to an entrepreneur, 30 years or older, who has overcome the challenges of the first 3 years as an entrepreneur and made it beyond 1000 days in business. The prize comprises R50 000 cash, an invaluable mentorship session with one of the judges, a Sisley beauty hamper worth R8 797, a Miladys fashion voucher worth R5 000, a GetSmarter local online course worth R15 000, a Michel Herbelin watch worth R10 500 and business luggage from Delsey worth R5 000.

The FAIRLADY Rising Star 2017 Award goes to an entrepreneur between the ages of 16 and 30, whose business is older than six months but still within the first 1000 days of business. The first three years (1001 days) of business is the critical period during which many start-ups fail. The prize comprises R20 000 cash, an invaluable mentorship session with one of the judges, a Sisley beauty hamper worth R5 465, a Miladys fashion voucher worth R5 000, a GetSmarter local online course worth R15 000, a Michel Herbelin watch worth R10 500 and business luggage from Delsey worth R5 000.

Judges for the FAIRLADY Women of the Future 2017 include Advocate Thuli Madonsela (a key judge since the inception of the awards); media entrepreneur and international speaker Jo-Ann Strauss, TV presenter; jeweller Kirsten Goss; Santam Head of people and transformation Jeanett Modise and FAIRLADY editor Suzy Brokensha.

Entry forms and terms & conditions are available on www.womenofthefuture.co.za. Entries close on 9 June 2017.

Hunter’s, the largest real, natural cider brand in Africa, introduces an innovative new hybrid category breaker, for those who want to discover something different.

Breaking barriers for the first time in South Africa, EDGE delivers the first gulp refreshment of cider at the start and the full-flavoured taste of hops to the very last sip.

With a rich, golden colour and a distinctively smooth taste, this refreshing cider which is balanced with the taste of real hops, gives men what they want to hit the spot.

“EDGE is for every social occasion that brings together what unites us. Created for those who like to explore the new and unconventional. For those who are bold, individual and confident to choose both the crisp refreshment of cider and easy drinking taste of hops,” says Maijaliina Hansen, Global Marketing Manager.

When asked what makes this new offering stand out, Maijaliina says: “What makes EDGE different is that it is real. Real cider combined with real hops extract. EDGE delivers bold masculine packaging and a real hops taste. The quality is undeniable.”

When beer will not cut it and flavours are fake, it’s time to get the best of both and keep it real. EDGE features an embossed bottle, premium blue and gold colours with a rich blue foil to lock in freshness. It’s designed to stand out from the crowd and created to satisfy the taste of unconventional explorers, who aren’t afraid to push boundaries and break barriers.

EDGE is now available in store in 330ml bottles and 440ml cans and is available in both 6 and 12-pack formats, to deliver real value that offers more to consumers. EDGE will engage consumers through a national tasting drive with free sample cans, visibility and in-store activations, premium events in the on-trade, and influencer targeted digital and PR support at launch. This will be backed by a through-the-line campaign with television, radio and out-of-home awareness, national large-scale events, in-store promotions, on-going premium visibility and the launch of the returnable 660ml bottle in 12 pack crates in July 2017.

Local art-house movie fans have the chance to watch another one of this year’s Oscar winning films, with the release of The Salesman at Nouveau cinemas from Friday 05 May.

Directed by Asghar Farhadi, The Salesman won the Academy Award for Best Foreign Language Film at this year’s Oscars, in addition to awards for Best Screenplay and Best Actor at the 2016 Cannes Film Festival. This is the second Academy Award win for Farhadi, who won it previously for A Separation in 2012.

This characteristically taut drama explores how unexpected cracks can form in the foundations of a seemingly happy marriage.

In The Salesman, the future looks promising for amateur actors Emad (Shahab Hosseini), a teacher, and his wife Rana (Taraneh Alidoosti), as they prepare for opening night on their production of Arthur Miller’s Death of a Salesman. However, when dangerous work on a neighbouring building forces the couple to leave their home and move into a new apartment, a case of mistaken identity sees a shocking and violent incident throw their lives into turmoil.

What follows is a series of wrong turns that creates a simmering tension between husband and wife that threatens to destroy their relationship irreparably.

Farhadi’s study on the potent power of pride, guilt and shame treads the line between arresting drama and revenge thriller with masterful ease.

Rolling Stone calls the film “Gripping” and The Village Voice says it is “An expertly made suspenseful film”. “Grade A magnificent” said Entertainment Weekly. Indiewire called it “the most important film of the year” and “a mesmerising achievement, Grade A+”.

The film has garnered 97% on Rotten Tomatoes and a host of four star reviews around the globe including amongst others: Washington Post, Boston Globe, Chicago Tribune, and Seattle Times, with A.O. Scott of The New York Times calling it “A life altering work”.

“We’re excited to bring this stellar film to South African cinemas to give audiences a glimpse of Asghar Farhadi’s brilliance as attested to by the film’s Academy Award win this year,” said Ryan Haidarian of Forefront Media Group, the film’s local distributor.

The Salesman releases at Nouveau cinemas at Rosebank Mall in Johannesburg, Brooklyn Mall in Pretoria, Ster-Kinekor Gateway in Durban and V&A Waterfront in Cape Town, on Friday, 05 May. The film’s running time is 125 mins, and the classification is to be confirmed.

The Republic of Gupta book to be launched

In just a couple of days time a new book exploring the Gupta brothers’ involvement in state capture will be launched. The Republic of Gupta, A Story of State Capture chronicles the Guptas dishing out cabinet posts to officials who would do their bidding, and benefiting from lucrative state contracts and dubious loans. It explores their exposure by Public Protector Thuli Madonsela, their conflict with finance minister Pravin Gordhan, and the real reasons behind the cabinet reshuffle of March 2017.

The book is written by award-winning investigative journalist Pieter-Louis Myburg. His series of exposes on a multibillion-rand contract for new locomotives at Prasa earned him several accolades, including the Taco Kuiper Award for investigative journalism. Myburgh cut his teeth at Beeld before honing his investigative reporting skills at Rapport. He currently works for News24.