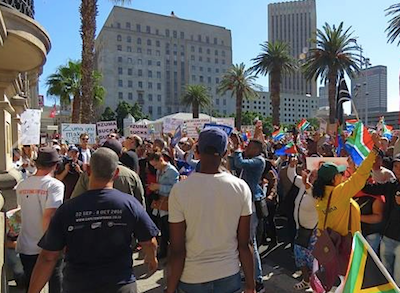 Whether or not you support the marches depends on your interpretation of the agenda behind them. After sifting through roughly 800,000 tweets about the cabinet reshuffle and the subsequent protest marches (making it the largest South African data set I have ever analysed), two clear narratives emerge from the data. There are undoubtedly more narratives but these two dominate. Many South Africans either:

Obviously, the reality is more complex than either narrative captures. The prominence of these specific narratives is not altogether unexpected though. Indeed, our president seems to be setting the pace in terms of the race-based narrative (while his supporters would say the alternative narrative is a construction of the white-owned, mainstream media). Since coming under increased pressure after the firing of then-finance minister, Nhlanhla Nene, at the end of 2015, we’ve seen our president taking an increasing number of potshots at white South Africans in general (e.g. here, here, here, here, here and here). This is not particularly surprising since white South Africans represent a soft target as there are legitimate grievances around the inequalities between the races that still persist twenty years after the end of Apartheid.

The race-based interpretation is similarly articulated by Woke and Black Consciousness movements who come from a more ideological, less populist, direction. As we will see in the data though, the end result is a meeting of these two worldviews with “whiteness” as the common touchpoint.

In order to evaluate for yourself the veracity of the criticism that the marches are driven primarily by white South Africans, take a look at these EWN videos summarising the Cape Town and Tshwane marches on Friday 7 April. Then take a look at footage of Julius Malema’s speech on the National Day of Action in Johannesburg to get an idea of the crowd make-up.

Finally, a team from the University of Johannesburg actually surveyed a small sample of marchers (presumably from one of the Gauteng-based marches). Whether or not you buy into their findings probably depends on your pre-existing beliefs, but they found that 57% of the marchers were black South Africans while 30% were white South Africans. Most of the marchers that they interviewed were from the middle class, regardless of race. From their findings we can tentatively infer that:

These findings seem to imply that the marches were driven by the black middle class with strong support from the white middle class. If anything, this gives the marches a class- rather than race-based narrative (although these things are often closely inter-linked in South Africa). However, regardless of the above research, our national discourse appears to be becoming increasingly polarised and over-simplified around race. Honest debate has become more difficult as the nuances and complexities of our country have been collapsed into just two starkly opposing viewpoints. In addition, what the latest Twitter data shows is that many previously distinct communities of black South Africans are being subsumed into the over-arching race-based narrative.

…what the latest Twitter data shows is that many previously distinct communities of black South Africans are being subsumed into the over-arching race-based narrative.

Let’s take a look at the main communities on Twitter involved in the discussions around the cabinet reshuffle and subsequent marches. I collected roughly 800,000 tweets discussing these events as already mentioned above. The tweets were generated by 144,634 unique Twitter users between the 31st March and 19th April 2017. As usual, we extract the usernames of the authors and the users that interacted with each other either by @mentioning or retweeting each other, and we connect them together into a network that shows us who interacts with whom. We then run a community detection algorithm on the resultant network in order to find the main groups talking amongst each other. This is what the overall network looked like: 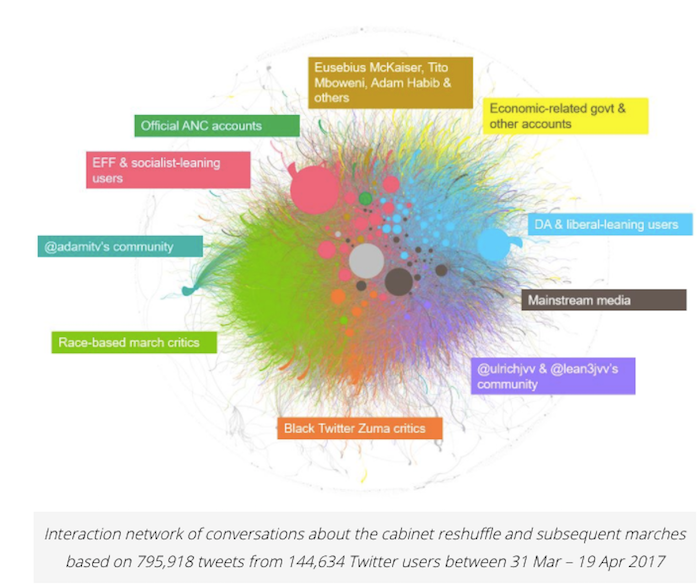 The communities on the right-hand side of the network above expressed support for the marches, while the single large green community labelled ‘Raced-based march critics’ was critical of the marches (as were the ‘Official ANC accounts’ community and ‘@adamitv’s community’), believing them to be the preserve of privileged white South Africans.

The battleground between the two narratives becomes very clear when we colour each of the ten largest communities (i.e. those with the most users in each) based on the narrative that its members appear to believe. It’s very easy to see which narrative each community believes based on the content that they retweet the most. In each community’s case, the top retweeted content is either unambiguously anti-Zuma and ‘state capture’ (purple communities below), or it is anti-‘white monopoly capital’ and dismissive of the marches as driven by privileged white South Africans (green communities below): A stand-out observation from this data set is how the race-based interpretation of the marches has united previously separate communities. If we unpack the ‘Race-based march critics’ community (which contained 18% of all users in our data set – a particularly high proportion for a single community in any data set), we find that it is actually made up of several communities which have appeared separately in other analyses (for example, you can see the below communities appearing separately in the 2017 SONA analysis here): This begs the question, is the ‘white monopoly capital’ narrative pushed by the BLF, Gupta media, PPF, ANC Youth League and others gaining ground among a more diverse set of South Africans, or were these communities only temporarily united by a shared race-based interpretation of our country’s circumstances? Either way, it shows that criticism of white South Africans can act as a unifying thread across a variety of ideologically diverse groups within South Africa.

…criticism of white South Africans can act as a unifying thread across a variety of ideologically diverse groups within South Africa.

Once again, our national politics have shifted. Here, for the first time, we see a new level of polarisation where our national discourse has collapsed down into just two options: either you blame the Zuma-led government for our country’s current predicament, or you blame ‘white monopoly capital’ and dismiss white South Africans as a lost cause in the process. The complex, nuanced reality that sits somewhere between these two extremes is lost in the process, making it more difficult for us collectively to come to a reasoned resolution as South Africans with a shared destiny.

Things continue to heat up in South African politics and the battle for hearts and minds has turned into a running street brawl where anything goes. While the country rises up in opposition to the Zuma presidency, the increased polarisation evidenced in our data is not an encouraging turns of events since the first casualty of any ideological battle is nuanced, reasoned debate. In its place we introduce othering, scapegoating (on both sides – whether you believe Johan Rupert or Jacob Zuma is responsible for all our woes) and a hardening of ideological boundaries that leaves no room for the necessary middle-ground.

Finally, here are the most popular tweets from the two opposing camps to give you an idea of the way in which each narrative is being framed and interpreted:

Can we salute Mcebisi Jonas for the day he turned down R600 million from the #Guptas, a man of integrity
RT if you agree.#cabinetreshuffle pic.twitter.com/ektD2jJSlc

No! This is not a #cabinetreshuffle! This is a coup d'etat! It's a direct takeover of government by a mafia with no reason to hide anymore!

JZ, this isn’t what we meant by “Mix It Up” #CabinetReshuffle pic.twitter.com/1IznU7VK1j

I warned you South Africa that #Gwede will say something completely different after #ANCNWC, exceptionally dubious old man.

I never thought In my life that I would have to take a stand against an illegitimate government in #SA again. #CabinetReshuffle

When Derek Hanekom went to prison & exile for our freedom, nobody labelled him agent of White Monopoly Capital.#KathradaMemorial pic.twitter.com/MtoKSMDOHt

I have known Pravin Gordhan for many years. A man of integrity, high moral and ethical values. He was doing a fantastic job for our country

This guy is having the time of his life with #EFF supporters. Dancing to the song, "Zupta must fall." #NationalDayofAction @News24 pic.twitter.com/AMkNDuDQ8T 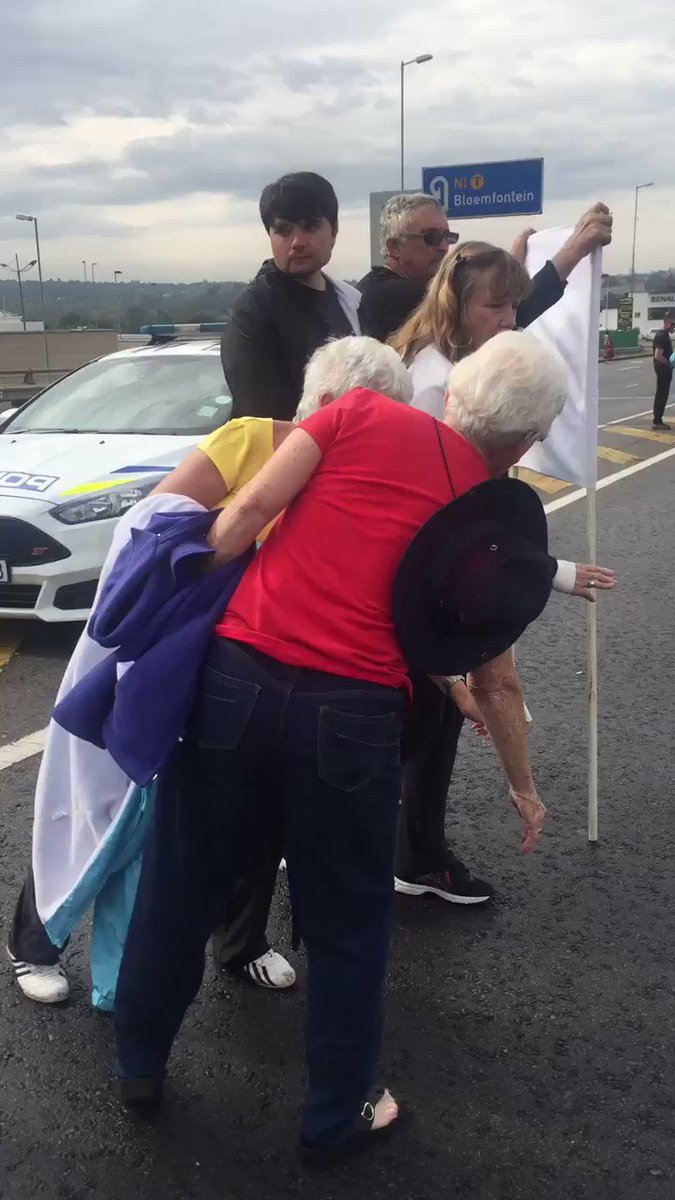 Signs of an abusive relationship #AntiZumaMarches

NOTE: I was unable to find a direct link to the below video tweet so this is a reshare of the video: 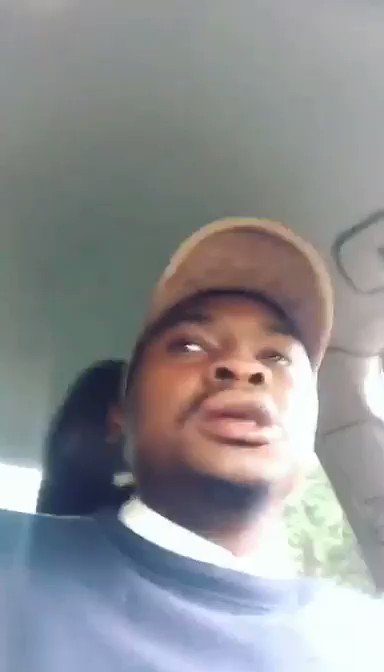 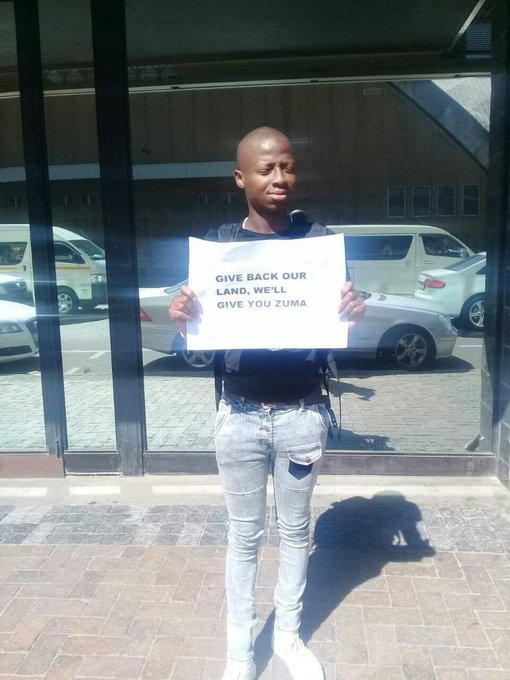 He takes the cup

You hate Zuma.
They hate Zuma.
That doesn’t mean they love you.
Stay woke.#AntiZumaMarches #PeoplesMarch #MarchForChangepic.twitter.com/AuIa651dzD 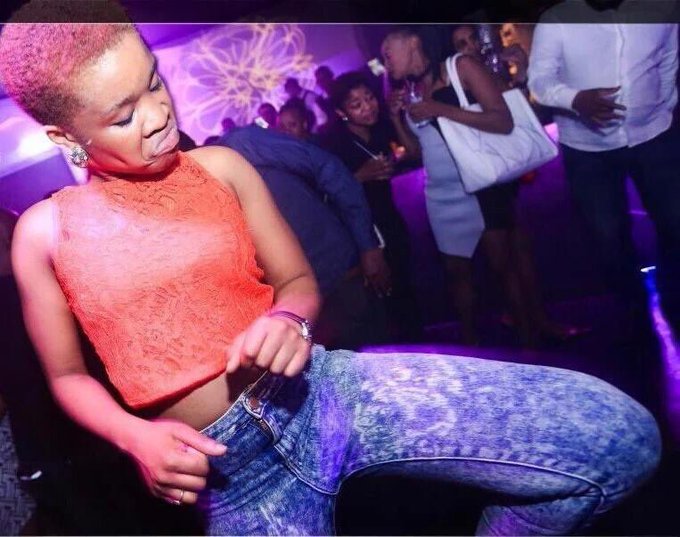 Guys. I finally got the power!!!