No country for old racists 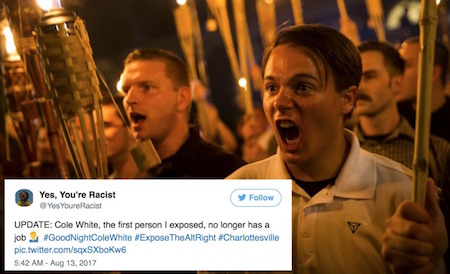 The outrage sparked by white supremacists marching in Charlottesville, Virginia took a further turn when reports indicated that at least one person had lost his job after being identified as a protesting white nationalist. Users took to Twitter after the march to identify protesters and blast their identities over social media. 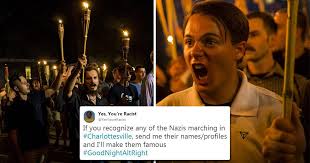 “If you recognise any of the Nazis marching in #Charlottesville, send me their names/profiles and I’ll make them famous,” read one such tweet. After discovering the name, address and workplace of one of the marchers, social media users repeatedly phoned his workplace demanding his dismissal. They also posted online comments to the same effect. The employer, Top Dog, issued a statement confirming that the employee was no longer employed with them.

The recent footage of a South African deputy minister assaulting a woman in public also went viral with loud calls for his removal.

The devastatingly effective use of social media to place pressure on an employer to deal with behaviour abhorrent to society is likely to see the greater use of this platform as a strategy to effect workplace change. Civil society groups, trade unions and employees themselves are likely to place greater reliance on social media as an integral part of campaigns to effect change: whether it is to halt mass redundancies, expose wrongful practices such as corruption or serious mismanagement, or to ratchet support for wage or benefits demands. Employers should thus ensure that their contingency plans for dealing with such events include strategies in respect of social media campaigns.

Pressurising employers to deal with unacceptable employee behaviour is likely to further blur the lines between workplace conduct and private actions. As a general rule, employers are not able to take action against employees for their after-hours conduct. What employees do in the confines of their homes or in a social context should not have a bearing on the employment relationship.

The notable exception to this general rule is where the employee’s private conduct has a negative bearing on the employment relationship. Thus, where an employee assaults a supervisor after hours, or make disparaging remarks about his boss on social media, or commits a criminal offence that has a bearing on his role within the business (for example, an accountant committing cheque fraud), the employer is entitled to take action against the employee.

The South African Constitutional Court recently confirmed that racism remains a scourge in our country and that employers ought not to tolerate such behaviour from employees. Employees who express racist views in the workplace have, rightly so, not received sympathy from the employment tribunal and labour court and are unlikely to receive any in future.

Following the indicants in Charlottesville, it is possible that we will see a rise in employees being “outed” for racist conduct after hours or in their private lives. Employers are likely to receive support should they terminate the services of employees who are found to have committed hate speech or otherwise associated themselves with unacceptable behaviour in their private lives.

It is unlikely that a court will force an employer to retain an employee who expressed racist views in public, thereby forcing other employees to continue working with such a person as a colleague. Workers are also entitled to demand that their employer takes action against a colleague who behaves in conflict with South Africa’s Bill of Rights.

Draconian as it may sound to privacy advocates, this is a powerful tool to make such conduct un-cool and marginalise those harbouring discriminatory or regressive views. Employers can send a strong signal to their staff and clients by ridding their workforce of such individuals. Considering recent events, those who don’t may find themselves on the receiving end of a social media campaign.