Despite publishing most of its work under a Creative Commons License, which allows others to use the stories within certain guidelines, The New Age has twice lifted stories from GroundUp without crediting the news agency.

The first instance occurred on 11 July when The New Age ran an article on its website without giving proper credit to the non-profit media organisation or the story’s original author. When GroundUp editor Nathan Geffen wrote to The New Age enquiring about this, the latter subsequently fixed the credits on the article, but did not offer any apology. Instead, Geffen received an empty email but for the URL of the corrected article.

The most recent case, discovered in the 30 August Western Cape edition of The New Age, was an article on page 3. Titled, ‘Policy robs pensioner of grant’, and with a byline for Tatenda Chiriseri, the entire article is a copy of an article published on the GroundUp website on 28 August, that was written by Barbara Maregele. Aside from the intro paragraph, which was different from the original story, the only other change was that some paragraphs had been moved around in The New Age version.

Geffen sent an email to The New Age editor in chief, Moegsien Williams, asking what steps his publication would take to prevent GroundUp articles from being plagiarised in future. This was the email response that Geffen received:

We always take allegations of plagiarism extremely seriously. Allow us an opportunity to investigate the matter and on conclusion, one of my colleagues on The New Age will revert to you expeditiously.

Geffen thanked Williams for his response but wondered why The New Age’s investigation was taking so long. “I understand that he has to investigate it, but this is something where an investigation shouldn’t be taking more than half an hour to clarify.” To aid Williams in the probe, Geffen sent him a link to the original article on the GroundUp website.

“I take this opportunity to apologise unreservedly to you, your reporter Barbara Maregele and Ground Up for Ms Chiriseri’s unacceptable conduct,” he wrote. “Until now The New Age enjoyed cordial relations with Ground Up and despite this unsavoury incident, I hope that we will continue to do so.”

Explaining the use of a Creative Commons License for its work, Geffen said GroundUp wanted the news it reported to “get out there” adding that although the news site doesn’t expect payment “we do expect credit, and it is very important that if we do work we get credited for it”. Geffen said they had a few similar cases in the past, but in all of them he received immediate apologies and immediate rectification.

GroundUp is a news agency that reports “news that is in the public interest, with an emphasis on the human rights of vulnerable communities. We want our stories to make a difference”. 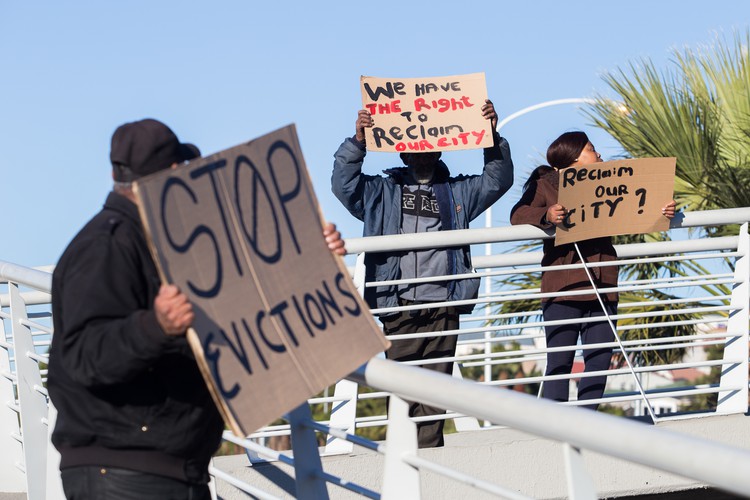 Reclaim the City supporters hold a picket against evictions at the Searle Street bridge in Cape Town.
Photo by Ashraf Hendricks