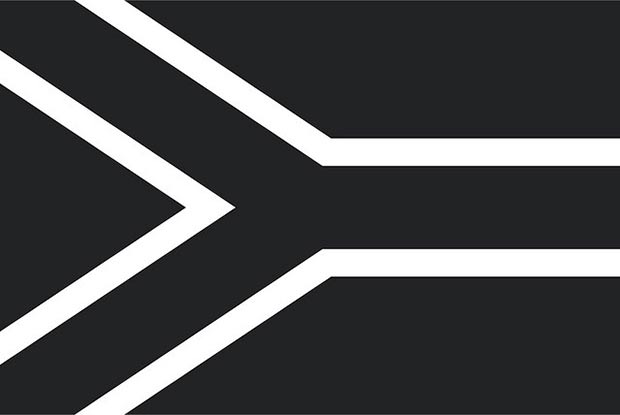 Race is politics, and it’s been a while since I’ve put up a politics-related post. Even the recent twelfth cabinet reshuffle by our president was not enough to prompt me to write up something new since we’d seen all the mayhem and reckless disregard for the well-being of our country before.

While the reshuffle generated over 50 000 tweets at the time (a respectable volume for any social event in South Africa), and even though we should never tire of holding those in power to account, I just didn’t have it in me to retread the same ground yet again. So I left it to others. My bad.

Monday’s #BlackMonday protest though caught my attention and so I thought I’d share some observations about it. #BlackMonday relates to the perception by many in the South African agricultural community that the rate of farm murders is unusually high compared to the rest of the population. Fact-checking these stats proves to be surprisingly difficult as Africa Check has written about here and here, and The Huffington Post SA discusses here.

Even if the murder rate is indeed orders of magnitudes higher than that of the general population, in absolute terms, the number of farmers who have been murdered is minuscule compared to deaths in the general population. Critics therefore suggest that focusing special attention on farm murders amounts to a double standard with echoes of white privilege and apartheid-era thinking.

Proponents of treating farm murders as a special category do so on the basis of the problematic stats that we’ve just referred to above. They argue that if there was any other group that was not saddled with the historical baggage that white, Afrikaans farmers have, their plight would be given special attention, especially if they played a similarly pivotal role in the economy and our country’s food security. As ever, the truth lies somewhere in between and, while the organisers made an effort to position the march as a non-racial act of solidarity, this attempt failed as we shall see below.

This dataset captured my attention for a few reasons. Firstly, as user @johanvanwyk999 points out, “In my entire life I’ve never seen Afrikaners protest”. 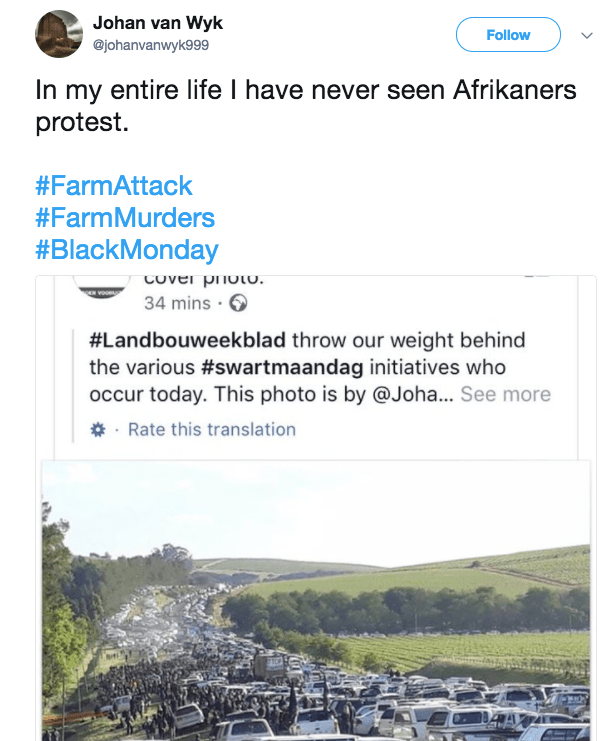 While I can think of times when Afrikaners protested in my lifetime, one thing is correct: white, Afrikaans, conservative South Africans are a notoriously retiring lot. This could be for many reasons, including contrition, fear or perhaps recognition that they no longer play a central role in South Africa and thus prefer to keep their opinions to themselves (especially when the court of public opinion is all too painfully sensitive to their historical legacy). Thus, my interest is always piqued when they decide to wade into the fray on Twitter (prior to this, the most recent occasion was the Jacaranda FM-Tumi Morake race scandal).

The second reason why this data is interesting is to gauge the extent of polarisation between groups in our country. Many believe that social media feed our existing beliefs and shape ‘filter bubbles’ around us wherein we are only presented with information that aligns with what we already believe (see for example here).

The end result is the creation of an echo chamber distinct from the echo chambers that other groups might inhabit. In the USA for example, these distinct echo chambers are represented by the Left (including Democrats, socialists and Hillary Clinton supporters) and Right (including Republicans, the alt-right and Trump supporters).

To answer this question, at least within the context of #BlackMonday, I wanted to visualise the conversations and see how the various communities sit relative to each other. I collected about 46 000 tweets for this analysis; however, the conversation is far from over. Since starting to analyse the data, another 20 000 tweets at least have been created, demonstrating just what an impassioned topic this is for many.

Below is what the interaction network looks like for those tweets that I collected. Each tweet contained at least one keyword or hashtag relating to Monday’s #BlackMonday protest. Each user is represented as a dot in the network and users are connected to each other when they interact with each other by retweeting or @mentioning each other. A community detection algorithm was used to identify the unique clusters of users talking amongst each other, and these are represented by the coloured regions on the map: As we can see from the above map, the (presumably) white, Afrikaans, conservative “#BlackMonday supporters” community in pink/purple sits pretty separately to the other communities at the top of the network. We can see that it’s pulled away from the other communities, forming a strong structure of its own. Interestingly, this community structure is pretty decentralised. While Steve Hofmeyr’s account is the most prominent within this community, he does not dominate as an influencer in the same way as we often see influencers do in other communities (such as Tumi Sole, Fikile Mbalula or Julius Malema).

Here are a few examples of the kinds of tweets that this community was reacting to (these were retweeted the most):

The killings need to stop. We hear our farmers cry, now the world needs to too. #SaveOurFarmers #BlackMonday pic.twitter.com/DWwBBCizaR

I support #BlackMonday. I come from a family of farmers. The lack of safety in rural SA is a crisis.

Farmers feed our nation, protect them!

A mass prayer in Klapmuts in the Western Cale ahead of the #BlackMonday protest convoy to Cape Town. #FarmMurders pic.twitter.com/4912EjapiS

Unfortunately, the marchers who hanker for the good/bad old days undermined any potential sympathy that the rest of South Africans in Twitter might have felt towards the plight of farmers. The appearance of old South African flags quickly lost the event any sympathy that it might have otherwise garnered. Despite some attempts at framing it as otherwise, the march was quickly reduced down to a variation of the same race discussion that we South Africans love to pick away at like a stubborn scab that just won’t heal.

These are the top most-retweeted comments made by politicians, celebrities and influencers alike when it came to the protest. Some were thought-provoking; others were scathing or dismissive: Where are those MKMVA drunkards when you need them on a #Blackmonday, yeses.

What is this arrogant display of insensitive and disregard of our past ? pic.twitter.com/YrNncDp2HZ

Just heard, "We urge all participants of #BlackMonday to leave their apartheid flags at home."

Days like these are interesting as one gets to see the real views. pic.twitter.com/83auH2wrTY

As you can see, the plea made by South African farmers today, whether rightly or wrongly, does not appear to have fallen on sympathetic ears. Admittedly, Twitter is not representative of the broader South African public which might be more open to their situation (our perception thereof). Twitter is made up of vocal, progressive users with a social agenda, so their responses need to be taken with a pinch of salt when trying to gauge the entire country’s reaction. Regardless, South African farmers lost the battle for hearts and minds on Twitter today.