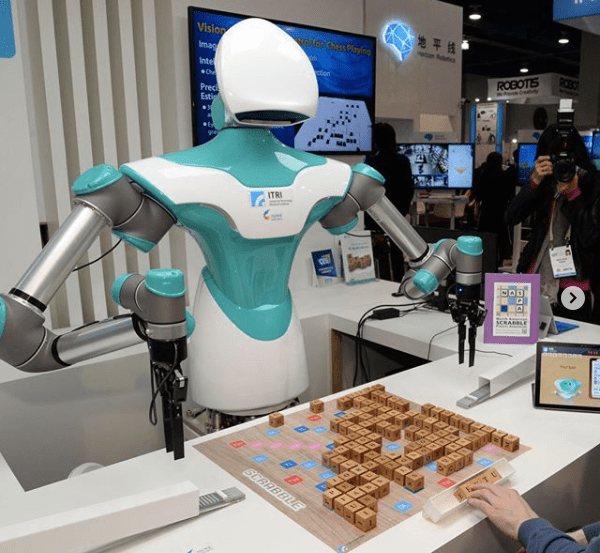 When the robot uprising began after losing to Scrabble...


Looking to a world in which every device, person and vehicle will be interconnected in some way, CES 2018 as usual highlighted the hottest tech products and trends. But many found this year’s expo a bit lacking.

In his review of CES 2018 for Cnet.com, John Falcone summed up the underwhelming nature of the event perfectly when he wrote, “When people look back at CES 2018 in five or 10 years, it’ll be the heavy rain, flash flooding and power cuts that’ll stand out more than the tech on display.”

When the weather is more topical than what’s on display, you know you’ve done something wrong.

But as Toby Shapshak, editor of Stuff magazine, explains, “If you wanted to describe CES 2018 in a word, that word would be ‘incremental’. There was less innovation on show this year and a greater emphasis on refinement of technologies we were already aware of. TVs? Got ’em. Smart assistants? Those too. Self-driving cars, VR, AR, drones? All old news. Many companies took a very safe approach to CES 2018, which isn’t a bad thing in itself but the perception that CES is just another trade show is something they’d have to be wary of. CES is supposed to be about the wildest ideas that might make it to market, it should be more imagination than increment.”

Most talked about tech

The usual tech suspects made an appearance with digital assistants in the home, virtual reality, and autonomous vehicles all making their mark. The most talked about products on display included Samsung’s The Wall modular TV, LG’s 65in rollable display, the HTC Vive Pro headset, the Vuzix Blade AR glasses, the Lenovo Smart Display, and LG’s ThinQ speaker/assistant. The latter is expected to land in the South African market this year and it’s expected the HTC Vive Pro will also likely make an appearance.

The former is expected to be especially prevalent in South African homes this year. “Digital assistants are coming. They’ll be everywhere soon enough, integrated into appliances and smartphones, built into homes and vehicles. What we can do and what we might do with them – that’s the exciting bit.”

Not everyone found it underwhelming

While some people were disappointed by CES 2018, others were able to find some tech gems in the rough. The top products showcased can be found here, while The Guardian chose to focus on the tech fails and the lessons that can be learnt from this year’s edition of the annual tech expo.