It’s World Radio Day today, a celebration launched by UNESCO back in 2012. This year’s theme is Radio and Sport. 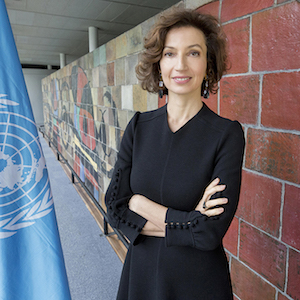 “The radio is a powerful means to transmit the enthusiasm of sport events. It is also a means to convey the values of fair play, teamwork and equality in sport,” said Audrey Azoulay, director-general of UNESCO.

“Radio can help combat racist and xenophobic stereotypes that are, alas, expressed both on and off the field. It allows a broad range of traditional sports to be covered, far beyond the elite teams. It provides the opportunity to nurture diversity, as a force for dialogue and tolerance.”

Azoulay said the fight for gender equality is central to this effort. “According to the report of the Global Media Monitoring Project, supported by UNESCO, only 4% of sports media content is dedicated to women’s sport. Only 12% of sports news is presented by women. UNESCO is working to improve the coverage of women’s sports, to combat gender discrimination on the airwaves and to promote equal opportunities in sports media. The task is immense,” she said

As billions of people around the world tune into the Winter Olympics, Football World Cup and a vast array of sporting events big and small this year, one half of society may be missing in action. We use the occasion of World Radio Day 2018 to look at the inseparable relationship between sports and gender, as well as how improved gender equality in sports broadcasting can lead to greater freedom of expression for all.

It is perhaps no surprise that the sports broadcasting industry is as dominated by men as the wider world of sports itself. However, the UNESCO-supported Global Media Monitoring Project in 2015 painted an especially grim picture for gender equality in sports coverage. Only 12% of  sports stories are reported by women, and sport was found to be the single least likely topic to be presented by women out of more than fifty topics studied.

Most alarmingly, it found women represent just 7% of sportspeople portrayed in the media, and that only 4% of sports stories focus predominantly on women. In many cases, the numbers for radio were even worse than those of other forms of broadcasting.

Of course, this is not just a problem of quantity or balance. Other studies have determined that, even when women athletes are featured, coverage can focus on “stereotypical” women’s sports such as gymnastics and volleyball, and that women’s sports events and achievements often struggle for airtime.

According to Cambridge University Press, women are far more likely to be referred to as “girls” than men as “boys”, and there is much more focus on their roles as mothers, wives or daughters. At worst, the media can concentrate on women’s physical appearances and “degrade them into sexual objects”, which the Harvard Law Review suggests could hinder media efforts to build a more diverse sporting audience, and discourage young girls from participating in sports in the first place. Studies have even shown that these types of narratives can lead to negative body image and low self-esteem amongst women athletes.

Sports broadcasting is also incredibly powerful in shaping norms for men and boys – not just about how they view women, but how they think about themselves. In a field as heavily dominated by men as sports is, and with such a large part of stereotypical “male culture” across the globe tied up in sports, there are very few other institutions with as much influence as sports broadcasting on the values and behaviours of young men growing up.

If women’s sports coverage can often focus on family and sensuality, men’s coverage is more likely to be framed in terms of conflict, battle and dominance. Images predominate of tough, aggressive players, refusing to succumb to the weakness of pain or emotion. Violence is weaved throughout sports coverage – in some sports a distraction from the game, in others an integral part of the game itself. The media is able to decide to what extent this appears and how it is portrayed. One U.S. study found that more than half of young children reported often experiencing violence through sports media, and it is crucial to consider the impact of this on future attitudes to aggression and conflict resolution.

For sports media, the severe lack of women commentators, the scarce coverage of women’s competitions and the promotion of narrow gender stereotypes represents not only a challenge to media pluralism and objectivity – it is to be complicit in the limiting of options for all people to express themselves and live the life they choose.

While some encouraging progress can be seen in some areas, new practices for sports coverage are needed that provide equal opportunities for broadcasters, offer fair portrayal of women and men athletes, and celebrate all athletes regardless of gender.

This story was first published by Unesco on World Radio Day 2018.