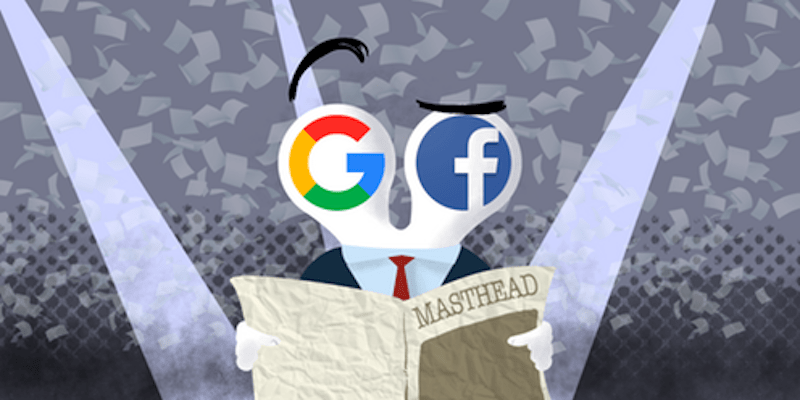 The latest projects are purported to support local and quality journalism, and “real news” instead of “fake news”. Google announced that it would splash US$300 million to support journalism, fight against misinformation, and to help “building a stronger future for news.” Corporate jargon never fails to delight me.

While launching its latest offering to news publishers, Google’s chief business officer Phillip Schindler said the company was deeply concerned of the dire state of “business of journalism”, and that the pressure in the industry “matters deeply to Google.”

Hence the launch of new payment system subscribe with Google which is aimed to help news publishers to convert readers into subscribers.

Only a few weeks ago Facebook announced its newest journalism project called “local news subscriptions accelerator”. In January, the company tweaked its algorithm to favour family’s and friend’s posts on its news feed, cutting the traffic to some news sites drastically. Then shortly afterwards, it decided to give priority to local news on news feed.

Facebook’s newest initiative is a US$3 million pilot project “to help metro newspapers take their digital subscriptions to a new level.” The company is working with 13 metropolitan newspapers in the United States on the project, but the outcome of it is naturally not yet clear. Some other similar initiatives have not yielded much for the publishers.

In fairness, it should be noted that news publishers’ sentiment towards Google has improved whereas it has worsened towards Facebook. Perhaps this is no surprise to anyone in light of recent scandals.

A publisher interviewed in the Journalism, Media and Technology Trends and Predictions 2018 report said that “Google has made a true effort in steering its relationship with the media in the right direction” whereas another commented that “Facebook has launched a public charm offensive for news media via the FJP [Facebook Journalism Project] but it seems to be more PR than action”.

Google’s news subscription tool will shortly give readers an option to pay for a newspaper or newspapers through its platform. The search engine gives its users access to a publisher’s site via their Google account, and after “your click and subscribe” Google handles the payments.

So far the “launch partners” for this new payment system include Fairfax Media, The New York Times, the Financial Times and The Washington Post. They all already have digital subscriptions, and the number of their paywalled subscriptions is rising. However, these subscription models still aren’t delivering revenue.

Google says its new paysystem means that its users will have “no more irritating paywalls popping up when you’ve already paid”. But what is not clear is how the Google subscriptions work with newspapers’ existing subscription platforms (and building them has been costly). Fairfax papers The Age, The Sydney Morning Herald and the Australian Financial Review already have digital subscriptions, so is the Google subscription adding another subscription layer? Or is Fairfax Media cutting costs and moving all its subscription services to Google?

According to AdAge news publishers will keep 85% to 95% of the revenue from the subscriptions sold via Google, but this has not been confirmed by the publishers or the search engine.

Publishers can also incorporate adverts from the Facebook audience network and this allows them to keep 70% of that revenue. The revenue publishers get from the platform is not substantial. According to the Digital Content Next report, Facebook and Google make less than 5% of the news publishers’ total digital revenue.

The timing of the two companies’ charm offensives is understandable, as the fear of being regulated is kicking in. Just recently, BuzzFeed founder Jonah Peretti predicted that Google and Facebook “are going to do more to support news. If they don’t, they’ll be regulated”.

The Australian Competition and Consumer Commission is already investigating what impact Google and Facebook have on competition and advertising in the media market. The UK government has also launched a review to investigate how dominant Google and Facebook are in the marketplace, and if the content producers are getting their fair share of the digital advertising revenue and if they are receiving enough – if any – revenue from the content they create and produce.

Read more:
What consumers need from the ACCC inquiry into Google and Facebook

In the United States News Media Alliance, a trade group with more than 2,000 American newspapers as its members, has formed Political Action Committee to tackle issues related to Google and Facebook in Capitol Hill, Washington. Expect to see more these kind of lobby groups emerging as the battle is on.

It’s surprising that news publishers seem to hand more power to Google because now more than ever there’s an urgency to have clear barriers between news companies, social media platforms and search engines.

News publishers have already given Facebook substantial power in terms of their news distribution. As the constant tweaks to Facebook’s News Feed show, any changes to the platform policies or algorithms can affect news publishers’ traffic and potential revenue. One has to wonder, why publishers hand so much power over to these companies when they get so little in return?