LATEST NEWS
Home Digital Online Who are you? I am Caron Williams, founder of The Throne

Who are you? I am Caron Williams, founder of The Throne

Posted By: The Media Reporteron: May 18, 2018In: Online
Print Email It is also a stylish online publication, which celebrates the most impactful and innovative tastemakers, content creators, musicians, bloggers, designers, and influencers within contemporary culture. Its editor is Caron Williams.

Why did you choose a career in media?

I’ve been fascinated by fashion publications, particularly Vogue’s various properties, since I was a teen. I’ve also always had a great affinity for music and urban culture, as well as the ability to understand and offer narration in ways many others couldn’t. I ended up studying psychology and working in advertising, but there was still a great yearning and passion for me to immerse myself in the media space.

What have been the highlights so far?

The overwhelming support has been incredibly heart-warming. It’s a surreal feeling to be able to conceive an idea in your mind and then see it come to fruition and impact people in such a meaningful way. That’s powerful.

The biggest challenges and thrills of launching your own business?

Capital has definitely been the biggest challenge. I have so many incredible ideas that I want to execute and transform the local digital media
landscape, so it requires being very creative and finding alternative means to do so. The most thrilling aspect has truly been just seeing The Throne come to life in such spectacular fashion, it blows my mind that people have embraced it so much.

Three things you can’t live without?

Franca Sozzani, the late editor in chief of Vogue Italia. She was so brave, and challenged the fashion status quo in a way no one had ever done before, despite constant criticism being thrown her way. She was a creative and editorial genius who never compromised on her vision and ended up changing the game. That’s the kind of impact I aspire to have.

In five years time you will be…

Running my own media empire. 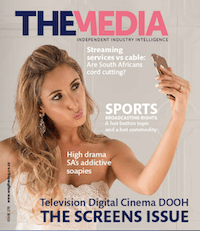