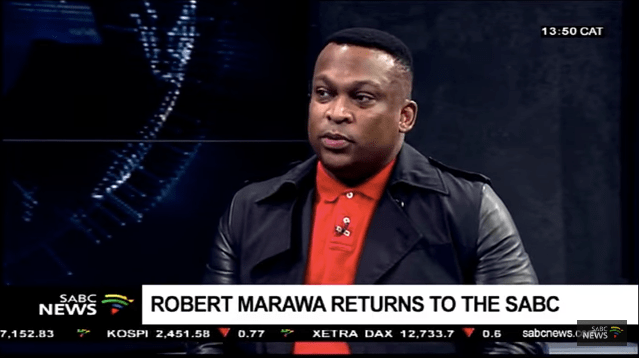 All the contractual issues between the SABC and Robert Marawa have been resolved amicably, and he will be officially returning to the SABC, according to the public broadcaster’s spokesperson, Kaizer Kganyago.

There was confusion over Marawa’s position at the SABC after reports that a lucrative R5 million contract initially offered to Marawa was rescinded.

Speaking to The Media Online, Kganyago rubbished those reports. “We communicated on 8 June that Robert Marawa is coming to the SABC after the World Cup… Now we are announcing that terms have been agreed between the SABC and Marawa and he will be arriving… Between then and now, there was never a time that a R5 million contract was rescinded. That came from the media, not from us.”

In a brief statement sent to The Media Online, Kganyago added that Marawa would be back at SABC from 1 August and would present a new sports show, which will be broadcast simultaneously on Metro FM (18:00-19:00) and Radio 2000 (18:00-20:00) Mondays to Fridays.

“All contractual issues between the organisation and Mr Marawa have been resolved amicably and the SABC looks forward to having Mr Marawa back on board once again, to deliver another dose of award-winning sports programming, as we grow our audiences and fulfil our mandate as a public service broadcaster,” Kganyago said.

Meanwhile, Marawa said he saw his return as “a continuation of a journey with the SABC and one that shows commitment from the leadership of the public broadcaster in fulfilling its public service mandate.

And he added, “This high level of support is important to me in delivering the kind of quality show that the listener deserves and with the historic simulcast option, we hope rush-hour traffic frustrations will be a thing of the past.”

But an internal investigation into the processes followed to get Marawa back on board is ongoing. It was launched by former SABC acting CEO Nomsa Philiso on the back of murmurings that proper procedures were not followed.

Media reported that implicated in the mess was new SABC chief operations officer Chris Maroleng and acting group executive for sports, Marcia Mahlalela. The reports added that the latter had resigned from the organisation.

Kganyago refused to name any of the SABC employees that are implicated, but revealed that the investigation is still ongoing and that those people will still have the opportunity to give their side of the story.

Here is the video when it was first announced Marawa would be returning to the SABC.