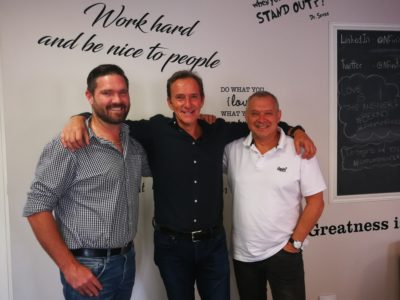 Both offerings are short-form game shows on which contestants can win cash prizes by answering questions about brands. The answers are then revealed through adverts being played, giving the brands exposure and advertising in this way.

The Big Brand Show will air on M-Net, Mzansi Magic and kykNET during evening prime-time (19:00 – 21:00) and there will be six three-minute shows a week, two across each channel. Varejes explains that this will allow brands to target very different audience profiles across the three channels, based on their aim and preference.

“It ties in beautifully with what brands are already doing on TV in terms of advertising, but now allows the audience to focus on a specific advert and what the brand wants to get across to the public in a little more detail,” explains Varejes.

The rate card is exactly the same as if a brand booked a 30 second advert, he confirms, and reveals that there will only be 24 advertising slots per week (four per show).

The Brand Game Show will be represented in Johannesburg’s Nfinity offices by Justin van Alphen.

The same format, for the first time ever, will also appear on radio, through the introduction of The Lucky Listener Show on Jacaranda FM and East Coast Radio.

“We wanted to choose key markets, one being Gauteng. Jacaranda FM is one of the biggest stations here and then KwaZulu-Natal, with East Coast Radio being one of the most popular stations. Cape Town will be a nice place as well, but we wanted to get it going on those two stations before launching in the Western Cape,” explains Varejes.

The shows on these two stations will give away over R4 million in cash prizes annually.

“The focus really is to let the consumer believe, while learning about a particular brand, that the brand is rewarding them for giving knowledge across,” he adds.

Craig Clay-Smith is the creator of Brand Game Shows, and the person that Nfinity Group has partnered with.

The exposure offered by the TV and radio show will be enhanced through some of South Africa’s biggest print titles, including Huisgenoot, You and Drum, as well as through the websites of the two radio stations and social media campaigns.

The Big Brand Show and The Lucky Listener Show will officially start running in May.