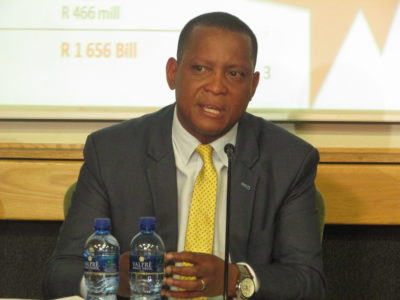 Former SABC chief operating officer Chris Maroleng, who was fired with immediate effect by the public broadcaster’s new board on Tuesday, is currently taking legal advice and weighing up his options, with the intention of appealing his dismissal.

The board axed Maroleng on the back of findings and recommendations flowing from a disciplinary process.

The Media Online has had sight of the charge sheet. Maroleng had four charges levelled against him: gross dishonesty, gross misrepresentation, gross dereliction of duties, and/or bringing the SABC into disrepute, regarding two matters.

The first one related to Marcia Mahlalela, who Maroleng named as acting group executive for sport (from 16 April 2018 to 16 July 2018). Mahlalela subsequently resigned from the SABC under a cloud amid a disciplinary proceeding over the irregular reappointment of sportscaster, Robert Marawa. Maroleng also wrote a reference letter to the South African Rugby Union, where Mahalela had found a prospective job. The SABC accused him of misleading SARU about the allegations against Mahlalela, which would be presented at her disciplinary hearing. She resigned before the hearing took place.

The SABC’s CEO also accused Maroleng of being indecisive in dealing with Mahlalela’s resignation, and of handling it in a unprofessional and indecisive manner. The board said it had lost confidence in Maroleng’s abilities as an executive as a result.

The second matter related to Carmen Schnider, who was seconded to the position of acting general manager of operational strategy and business transformation from 1 April 2018 to 30 September 2018, and an acting allowance granted to her. The SABC’s executive in charge of HR had stipulated Schnider’s conditions of employment should remain unchanged as she had been seconded to the position, and would not have been acting in a higher position with more responsibilities. Nevertheless, Maroleng and another official approved an allowance over and above Schnider’s salary.

Maroleng is not looking to return to the SABC, believing the relationship with his former employer is broken, but he is pursuing processes to clear his name.

“Ultimately all I have, and all I trade on, is my reputation. I did not steal from the SABC, I was not involved in any corrupt practices, I didn’t enrich anyone illegally or anything like that. That is why I feel it is important to pursue this as a way of clearing my name from the bad reputational impacts of what would happen now,” he added.