Posted By: Michael Bratton: May 27, 2019In: Broadcasting
Print Email 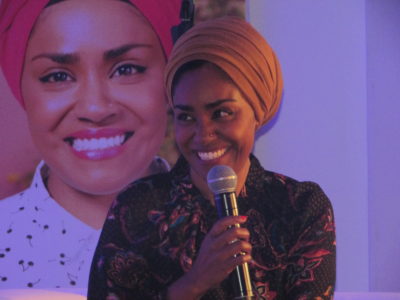 In South Africa for BBC’s Luxury Upfront event and to promote her new show with the broadcaster, Nadiya’s Asian Odyssey, Nadiya Hussain, has been the subject of plenty of headlines.

After she was thrust into the spotlight four years ago as the winner of the Great British Bake Off, Hussain says nothing could have prepared her for the media exposure and comments she faced.

“Nothing fully prepared me for, not the moment that I was on TV, but the moment when they released our names to the public … In that very first article, under my name it said ‘housewife’, which I was and I’m very proud of… but the comments and some of the things I was having to read. Because I was a housewife there were lots of comments about me being on benefits and living off the government, and that’s what I hadn’t really prepared for,” she explains.

Hussain believes she is a lot better at taking those comments now, advising people to ignore the hate, as the people who are making them don’t matter.

Asked how she prevents her children from being exposed to unnecessary media attention, particularly when they were a part of the season finale of Great British Bake Off, and feature on her cooking shows, Hussain takes a very pragmatic approach.

“I know when I did Bake Off they were there at the end for everybody to see. Once you’ve done something like that you can’t undo it. But I can certainly have control over how much they are exposed. But when I think about how exposed all our children are, whether they are in the public eye or not, with access to social media and pretty much anything they want, we’re all exposed… Cooking is all about my family, that’s where my love of food comes from, so it makes no sense not to have them there,” she explains.

Finding her place in media

Now as a television presenter, Hussain says it took a long time for her to find her space in this environment as there is a perception that it is for middle-aged, white men. She’s grateful that she is now a role model for girls who look up to her and find inspiration in her success.

She is returning to BBC television with her new show, Nadiya’s Asian Odyssey. Having undergone a DNA test, Hussain discovered that aside from Bangladeshi heritage, she also has family ties to Thailand, Cambodia and Nepal. Upon discovering this, she travelled to and across these nations, of course sampling their cuisine. Her adventures were documented by BBC for a two part show.

BBC’s Luxury Upfront event showcased the exciting programming that is coming up on the broadcaster’s channels for the rest of this year. Keep your eyes on The Media Online next week for a summary of these.

Here are some pictures from the press conference featuring Nadiya Hussain: