Seven of the best local hits to stream now on Showmax 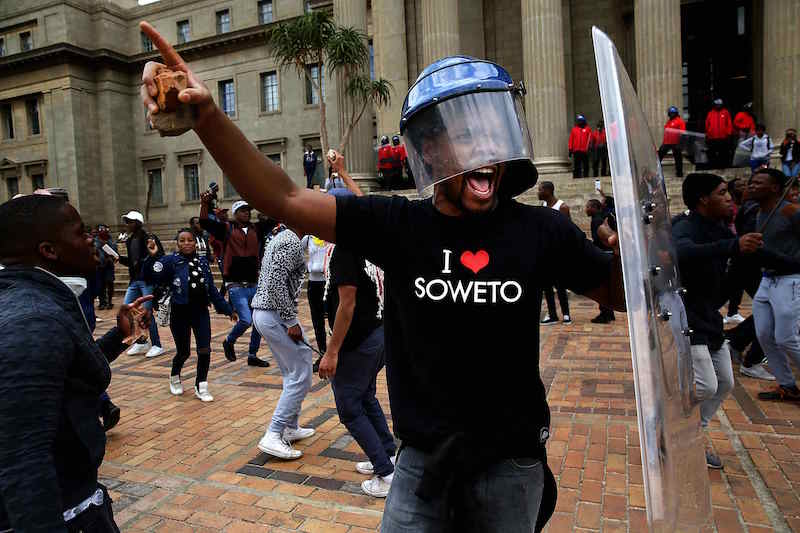 Photo: Everything Must Fall/ © Alon Skuy


Seven of the best local hits on Showmax this month:

• 2019 One World winner Everything Must Fall

• Isithembiso, the most awarded soap at the 2019 SAFTAs

• 2018 Encounters Audience Award winner The Fun’s Not Over

After being nominated for an International Emmy for two years in a row for her work on Is’Thunzi, South African actress Thuso Mbedu made headlines this month when she was cast as the lead in The Underground Railroad, an adaptation of Colson Whitehead’s Pulitzer Prize-winning novel, to be directed by Oscar winner Barry Jenkins (Moonlight, If Beale Street Could Talk).

With so many South Africans breaking through on the international stage, we’ve put together a catch-up guide to the best of what’s come onto Showmax this April, from festival-favourite films like High Fantasy and Meerkat Maantuig to award-winning documentaries like Everything Must Fall and The Fun’s Not Over to weekly express episodes of SAFTA-winning series like Lockdown and Isithembiso to the Silwerskerm-winning short film Axis Mundi.

Premise: An unflinching look at the #FeesMustFall student movement that burst onto the South African political landscape in 2015 as a protest over the cost of education. The story is told by four student leaders at Wits University and their Vice Chancellor, Adam Habib, a left-wing, former anti-apartheid student activist. When Habib’s efforts to contain the protest fail, he brings 1 000 police onto campus, with dire consequences for the young leaders…

1. It’s directed by Rehad Desai, who won the International Emmy Award for Best Documentary for Miners Shot Down, about the Marikana massacre

2. #feesmustfall was a pivotal moment for South Africa; as we approach our national elections, it’s the perfect time to revisit the questions the movement raised about our priorities as a nation

3. Vuyani Phambo and Fasiha Hassan, who both feature prominently in the film, are on the parliamentary election lists for The Economic Freedom Fighters and ANC respectively

4. In May, Everything Must Fall is one of six productions representing South Africa at INPUT in Bangkok, an annual showcase of the best storytelling in the public interest

Four young friends on a camping trip in the Northern Cape wake up to discover they’ve all swapped bodies.

1. Despite being shot on an iPhone 7, the body-swap satire screened at some of the biggest film festivals in the world, including AFI, Berlin and Toronto
2. High Fantasy is the second film from Jenna Bass, one of South Africa’s most exciting directors, whose first, Love The One You Love, won Best Direction at Durban International Film Festival in 2014, and whose third, Flatland, opened the Panorama section at Berlin this year. Jenna also co-wrote Rafiki, the multi-award-winning Kenyan love story that wowed Cannes last year
3. Setting a body-swap satire in South Africa raises a host of intersectional identity politics issues, so the film will give you lots to talk about…

After her father’s sudden death, Gideonette de la Rey descends into darkness as she realises that she’s the only one left with a cursed family name. With the help of her new friend Bhubesi and his make-shift moonship, she’ll have to find the inner strength to face her fears in order to break the curse.

1. Sakkie Bergh, who edited many of Die Antwoord’s music videos, recently picked this as his favourite African film on Africa.film, calling it “sad, humorous, beautiful and full of hope and inspiration.”

2. Director of Photography Willie Nel won Best Cinematography at both the South African Film and Television Awards and Silwerskerm for capturing the wild beauty of the Magoebaskloof Pass in Limpopo
3. It’s the second feature film from Hanneke Schutte, one of the winners of the 2013 Jameson First Shot competition, which saw her write and direct the short film Saving Norman, starring four-time Oscar nominee Willem Dafoe and produced by two-time Oscar nominee Dana Brunetti (Captain Phillips, The Social Network). After making her feature debut with the award-winning Jimmy In Pienk, Hanneke cracked Austin Film Festival’s 25 Screenwriters To Watch list last year for Meerkat Maantuig

4. It’s been a hit at children’s film festivals around the world, so is perfect for your next family movie day

This hit Mzansi Magic drama is set in Thabazimbi, a fictional high security prison for women, where power and survival mean everything. Season 4 picks up three months after the riot. Deborah (Pamela Nomvete) has clawed herself back to the top as governor of the prison, where Tyson (Lorcia Cooper) is now in power, with access to more contraband than the prison has ever seen.

1. The acting. At this year’s South African Film and Television Awards, Dawn Thandeka King won Best Actress: Drama as Ma-Z and Lorcia Cooper won Best Supporting Actress as Tyson. Add in SAFTA winners like Zola Nombona (Ingoma) and Nthati Moshesh (Saints and Sinners) and FESPACO winner Pamela Nomvete (Zulu Love Letter), among many others, and you have arguably the best ensemble cast on South African TV at the moment.

3. In May, Lockdown is one of six productions representing South Africa at INPUT in Bangkok, an annual showcase of the best storytelling in the public interest.

This hit Mzansi Magic soap follows the lives of young students in Johannesburg, as their lives intertwine with some very dangerous people.

1.Isithembiso was the most awarded soap opera at this year’s South African Film and Television Awards, taking home four awards

2. It’s created by legendary South African director Angus Gibson, who was nominated for an Oscar for Mandela: Son of Africa, Father Of A Nation and a BAFTA for 28UP: South Africa, and won a Special Mention at Venice for Yizo Yizo. He has directed some of South Africa’s most loved programmes, from Heartlines to Shuga

3. Hamilton Dlamini, who stole the show in Five Fingers To Marseilles as Sepoko, won his second SAFTA for Isithembiso as the power-hungry Banzi ‘The Wolf of Braamfontein’ Kunene

The Fun’s Not Over

James Phillips, who died aged 36 in July 1995, was the voice and conscience of a generation of white South Africans. The Fun’s Not Over tells a little known and now almost forgotten part of South African cultural history that emerged from white alternative protest music during the 1980s and 1990s.

1. The Fun’s Not Over is James’ story in his own words and through the voices of the likes of Jack Parow, Koos Kombuis, Max du Preez, Pieter Dirk Uys, Vusi Mahlasela and his friends and family

2. The music includes his 1983 single as Bernoldus Niemand, Hou My Vas Korporaal, which became an anthem of the End Conscription Campaign and helped spawn alternative Afrikaans rock music and the Voëlvry movement; and the gut-wrenching Shot Down, his 1985 track with The Cherry Faced Lurchers, which addressed both white privilege and the violence of the apartheid state

In an effort to rescue her declining ratings, a paraplegic talk show host (SAFTA winner Antoinette Louw from Die Laaste Tango and An Act of Defiance) interviews a self-proclaimed healer (two-time SAFTA winner Deon Lotz from Skoonheid), who claims he can make her walk again on live TV.

1. It’s an acting masterclass from two of South Africa’s best actors in the lead roles.

2. It’s co-written and co-directed by Matthew Jankes, who directed the Vimeo Staff Pick and Short of the Week Umkhungo, and Sean Steinberg, one of the writers on the record-breaking Showmax Original The Girl From St Agnes.

Other new highlights on Showmax include:

• The Showmax Original Trippin With Skhumba, which ended with a 97-minute stand-up special featuring the 2018 DStv Viewers’ Choice Award: Favourite Comedian and Comics’ Choice Comic of the Year 2017 along with his guests from the previous six episodes: Celeste Ntuli, the most nominated comedian with Skhumba going into the 2018 Comics’ Choice Awards; 2016 Comics’ Choice Comic of The Year Tumi Morake; 2018-2016 Native Tongue winners Siya Seya, Salesman and Mashabela Galane; and 2015 Intermediate winner Schalk Bezuidenhout, among others. Trailer: //youtu.be/a9YFLt3HkAg

• The Herd, nominated for five SAFTAs this year, including Best Drama. The Herd is about Bheki (Sello Maake Ka-Ncube in a SAFTA-nominated role), who made his fortune with the help of a witch (Winnie Ntshaba) – at an unbearable price. New Season 2 episodes weekly, express from Mzansi Magic. Trailer: //youtu.be/G1w4KxM8NLY
• Die Spreeus, the hit supernatural series about two investigators (Chris Vorster from 7de Laan and Monique Rockman from Nommer 37) who take a closer look into suspected paranormal activity in South Africa.  New episodes weekly, express from kykNET. Trailer: //youtu.be/a45eE-xn7sE

• Rehad Desai’s The Giant Is Falling, winner of Best South African Film at Joburg Film Festival 2016, which looks at the relative fall of the ANC and rise of the Economic Freedom Fighters ahead of the 2016 local elections. Trailer: //youtu.be/DJDRtWL1sk4