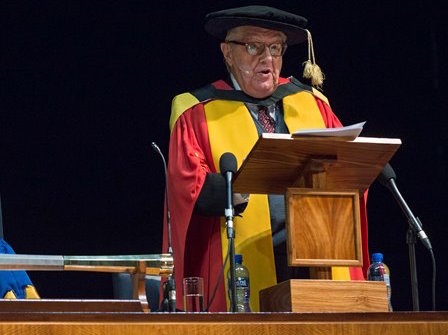 
Raymond Louw has died, just one day after his wife, Jean. The 92-year-old South African journalist, editor, media commentator and press freedom activist was named a World Press Freedom Hero in 2011 by the Vienna-based International Press Institute. It cited his “commitment to press freedom and his outspoken defence of journalists’ rights”. He was a former editor of the Rand Daily Mail, and led the Media Defence Trust, an organisation created to defend journalists against Apartheid state censorship and detention. He was later the editor and publisher of the Southern African Report. 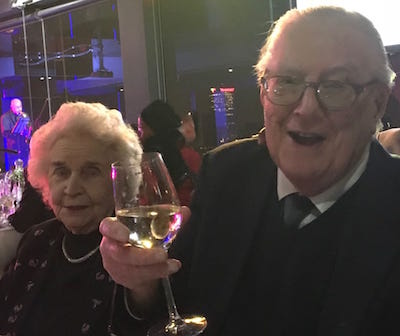 A stalwart and a role model

I’ve known Raymond Louw for many years as we both served on various media bodies among them the Press Council. He was a founder of the South African National Editors Forum and the Institute for the Advancement of Journalism, and was also a founding member of the Freedom of Expression Institute.

He’s been an activist for media freedom locally and globally, receiving several awards including a doctorate from Wits University. He was a stalwart and role model for many of us, a man with a sharp mind and a sharp wit still in his 90s. His wife Jean died yesterday, a wonderful and inspirational and strong woman who ran the Southern Africa Report alongside Raymond for many years. I am devastated. ~ Amina Frense, chairperson at the Institute for the Advancement of Journalism

A ‘real lion’ throughout his life

Raymond Louw has passed away, within one day of his amazing wife Jean. Some of our trustees on hearing the news said, “Apart from having an illustrious career as an editor I think he was a real lion who throughout his life was not afraid to take unpopular issues on. An activist to his last breath.” ~ Laura Pollecut.

Justine Limpitlaw added, “I want to be like Raymond when I’m in my 90s”.  I’m not sure how, because of course we know we all have to leave this earth at some point, but somehow we just expected Ray to just keep going. Yes, he was a bit old and frail but he was there, whenever you needed a voice of sanity, of principle and ardent, ardent commitment to press freedom.”

Others will have a far more comprehensive knowledge of his role and fight against the nationalists. I have known Raymond for over 25 years and in that time while I may have disagreed with some of his points he was always principled, committed to taking our democracy forward, and to highlighting the importance of media freedom. Raymond was reliable and firm with a great sense of humour. He was a wordsmith and in the way of brilliant journalists, he was able to distill core issues into simple core principles.

A giant in the sector his ongoing commitment was astonishing. Whenever young members of MMA joined and met Ray they would wonder how old he was and when he would retire, we would reply that he was simply ageless, he had been about that old since I had known him and he would carry on. More recently, we saw less of him at our SOS Support Broadcasting Coalition meetings, but he would always send a formal apology and follow up on issues, and take time to read minutes and engage.

Over the last few years, we took such pride that he would attend and support our events as Media Monitoring Africa. In later years he would bring Jean, who always somehow had a sparkle in her eyes, she seemed to enjoy all the events and taking in all the things going on around and I can imagine them chatting long hours about everything.

One of my most memorable recent exchanges with him was at MMA’s 25th birthday celebration. He came along with Jean. They sat and chatted, and as usual had a few glasses of wine. Raymond had to leave before the formal speech but came up and told me, “the work MMA does is just incredible and so important, you must keep going and keep fighting for press freedom and our democracy”.  Then he asked me to please send him my speech, and he was insistent that it wasn’t just because he was leaving but because he really wanted to know and to celebrate with us.

We mourn the loss of a press freedom giant, a principled voice and supporter. We send all strength to Ray and Jean’s family and friends and especially [their children] Fiona and Derek. As sad as this day is we will use it to ensure we double our commitment and continue fighting for press freedom, and hopefully for Ray and Jean it means they can actually rest, and we imagine them sitting back with a glass of wine. On behalf of the Trustees, and entire team of Media Monitoring Africa we salute you Ray and Jean. ~ William Bird, executive director of Media Monitoring Africa

He was a media legend. He dedicated his life to fighting for media freedom and freedom of expression. He had unflagging energy and wisdom and was an active member of SANEF right up to the end. He should be immensely proud of what he achieved over his long and active life. He will be sorely missed. ~ Kate Skinner, executive director of the South African National Editors Forum

Raymond Louw’s service to journalism in South Africa was truly Iife-long. When I started journalism in the ’80s he was the go to person for anyone in trouble and was respected locally and internationally for his commitment to press freedom. I reconnected when I started working at the World Association of Newspapers (WAN- IFRA) and realised that his age had not diminished his fight or ability to have a good time. He outdanced most colleagues at conferences, and loved every minute of connecting with people who shared his ideals. That South African media is today mostly free, must be part of his considerable legacy. ~ Cherilyn Ireton, executive director of the World Association of Newspapers and News Publishers’ World Editors Forum

What was amazing about Oom Ray was how, even at a very advanced age, he never let frailty or ill health get in the way of his dedication to the work for Sanef.

Raymond Louw fought tirelessly for press freedom in South Africa throughout his life, both as an editor and then as a freedom of expression activist who was respected worldwide for the work he did. Raymond was a national treasure who deserves the highest honour South Africa can bestow for the role he played in fighting attempts to curb the media both during the darkest days of Apartheid and in more recent years. He was both a friend and a mentor, and I will be forever grateful for his friendship and guidance over the years. Hambe Kahle Ray. ~ Raymond Joseph, journalists and editor, former ICFJ Knight Fellow

Raymond and Jean Louw. It is with great sadness that I learnt this morning that Ray and Jean died within 24 hours of each other. I first met him on a vac job in 1971 when he was already editor of the Rand Daily Mail, and later worked for him and became a close friend. My admiration for him is undimmed. He embodied courageous and principled journalism, an editor and fighter against injustice at a time when we most needed one.” ~ John Mattison, journalist, editor, author, former SABC board member

Note: The Media Online will update this story as we receive more tributes to Raymond Louw.

* Story updated at 1.07pm with comment from Mondli Makhanya.