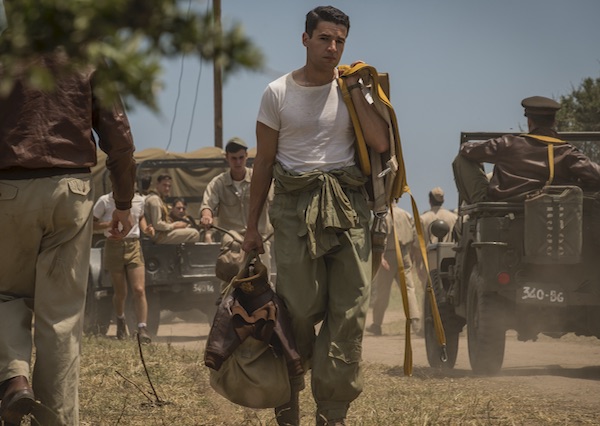 [PRESS OFFICE] Catch-22, nominated for two Emmys in 2019 and currently #75 on Rotten Tomatoes’ list of the Best TV Shows of 2019 So Far, is now streaming on Showmax.

The six-part mini-series tells the story of John ‘Yo-Yo’ Yossarian, a young bombardier off the coast of Italy in World War II, whose frantic obsession every time he goes up on a mission is to come down alive. His odds of success at such a simple aim keep getting worse, because Colonel Cathcart keeps raising the number of missions the men have to fly.

More than the retreating Germans, the real enemy for Yossarian and his rag-tag bunch of friends is the bureaucracy of the military, inverting logic at every turn. The pinnacle of this is Catch-22, a military by-law which states that if you willingly fly your missions, you’re crazy, and don’t have to fly them; all you have to do is ask. But if you ask, that proves you’re sane, and so you have to fly them.

Here are three reasons why critics love the show, which has a 87% critics rating on Rotten Tomatoes:

The series is based on the wonderfully sharp, maddening 1961 Joseph Heller anti-war classic, Catch-22. At once comic and tragic, it’s a dark farce about the absurdity of war as well as the institutionalised idiocy and bureaucratic lunacy that fuels it.

Adapting Catch-22 was a big ask – no one has been ambitious or mad enough to try since Mike Nichols’ 1970 movie version. “The truth is, the book is a big, sprawling, beautiful mess of a book,” series actor-director-producer Grant Heslov (Argo) told BBC News.

Australian screenwriters and series developers Luke Davies (nominated for an Oscar for his screenplay for Lion) and David Michôd (a Sundance Grand Jury Prize winner for Animal Kingdom) opted to tease a single POV chronological story out of Heller’s frenetic narrative.

As The Hollywood Reporter says, the writers “manage to find the difficult tonal balance of the book: a winning combination of satire, madcap bombast and deep existential angst … staying true to the essence of the book.”

2. ‘Every actor is bringing their A-game‘

“Catch-22 is an almost perfect series,” says Forbes. “Every actor is bringing their A-game to the table…”

Yossarian is brought to life by Christopher Abbott (First Man, The Sinner). “Abbott’s Yo-Yo is grounded and underplayed, in contrast to the blackly comic craziness around him, which pays off hugely,” says Empire.

It’s no wonder considering the team driving the project. Clooney has won four Golden Globes and two Oscars, including the Best Picture award for Argo, which he co-produced with Heslov and Ben Affleck. Here, Clooney and Heslov share the exec-producer credit as well as the directing, the latter along with producer Ellen Kuras, who’s directed on Umbrella Academy, Legion, and Ozark.

The series was produced by Anonymous Content, the powerhouse behind Oscar winners like Eternal Sunshine of the Spotless Mind and The Revenant, as well as series like the Golden Globe-nominated True Detective and Golden Globe winner Mr. Robot.

As The Guardian says, the result is a “dizzying, daring triumph… an exquisitely filmed, disorienting send-up of our ability to rationalize insanity as just the way things are.”

“Catch-22 is magical, maddening, tender, and caustic in equal measure,” says The Atlantic. “Its upside-down logic confronts you with the beauty of life and the monstrousness of a war, whose only objective is to snuff that beauty out at every opportunity.”

Showmax is an internet TV service. What sets Showmax apart is a unique combination of hit African content, first and exclusive international series, the best kids’ shows, and live sport. For a single monthly fee, get unlimited access. Start and stop when you want. No ads. Cancel anytime – there’s no contract.

Showmax was born in 2015. The service is available throughout sub-Saharan Africa and to selected diaspora markets worldwide. For a free trial, visit www.showmax.com.