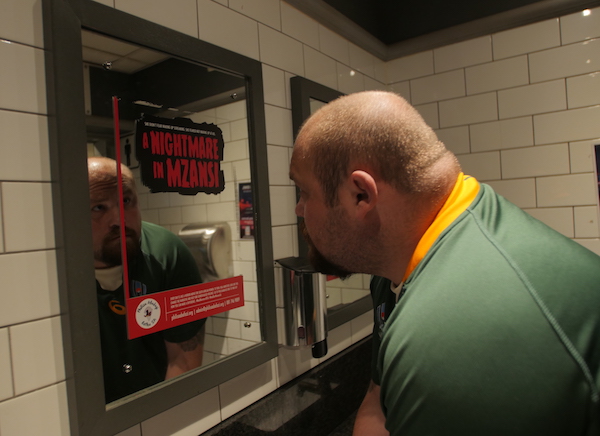 “The idea was to prompt South Africa’s men to see themselves in the same way that South African women do, with a message saying that they can change the narrative,” says executive creative director, Jabulani Sigege.

The bottom line of the campaign is that in South Africa, men are the biggest threat to a woman’s well-being.

With the current climate around GBV being akin to a horror, posters of reimagined versions of iconic horror movies Psycho, Friday the 13th and Nightmare on Elm Street were created. But these weren’t regular posters. They were decals (stickers) placed on men’s bathroom mirrors across establishments in Cape Town, ensuring that as men looked into the mirrors, they would see themselves becoming the ‘stars’ of the movie; the monsters South African women really fear.

Hero recently held a session with a facilitator to help staff work through the emotions people were feeling and PTSD they were experiencing following the prevalence of GBV incidents being reported daily.

“In that session, it became apparent that women were living in fear, wondering when – not if – they would be the next headline or trending topic. To them, every man was someone to fear,” Sigege says. “But it was also clear, after listening to conversations in the real world and online based on men’s responses to women opening up about this fear, that most men struggle to grasp this. It seemed they simply lacked the ability to understand that the brutality of our society has taught women to fear men. There was an unwillingness to comprehend that men didn’t have to do anything for women to justifiably be afraid of them.”

The aim of this campaign, says Sigege, is to play a part in addressing and solving that problem.

“Until South African men face how they are collectively viewed by South African women, as potential threats, they won’t fully grasp the urgency of the situation our country is in. After all, they see themselves as ‘nice guys’, ‘not like the others’.”

While more venues have requested to come on board in support of the campaign, the posters are currently on display in Cape Town bars, pubs, and restaurants like The Dubliner, Fat Cactus, Cape Comedy Club, Café Manhattan, Fireman’s Arms, Bombay Bicycle Club and more.

The posters will remain up until phase two of the campaign launches on 25 November, when 16 Days of Activism for No Violence Against Women and Children begins. Hero is looking forward to continuing to work with Philisa Abafazi Bethu in order to help South Africans create a new normal – one where an incident or story about gender-based violence isn’t just another day in South Africa.