Changing the conversation on business, media and corporate activism 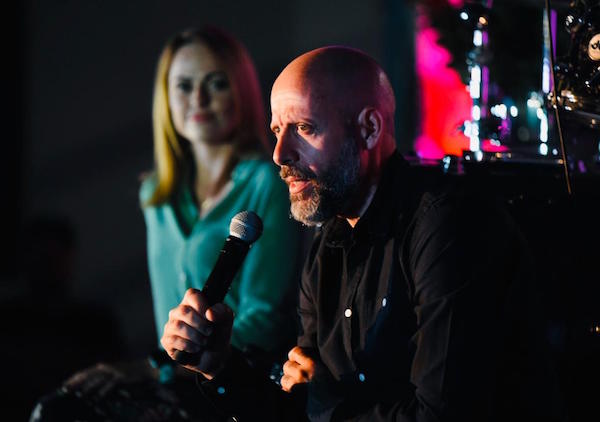 Why did it take the firing of a finance minister to galvanise corporate South Africa to begin caring about the future of this country? asks legendary journalist and social commentator Richard Poplak.

“We as a society murdered people for platinum, but no one said anything at the time,” he said.

It had been one of the Daily Maverick’s proudest moments, he said, to break the story of how the striking miners had been shot in the back by police.

“That changed the conversation in this country, but it was only until the firing for the finance minister and the existential threat that this posed, that corporate SA mobilised. On the night of Nhlanhla Nene’s firing on 9 December 2015, an economist called me. ‘What happened?’ she asked, ‘all our modelling has gone out to the window’.

“I said ‘welcome to the reality of what we live in everyday, a gangster state bolstered by the business sector’,” he remembered.

“What is corporate activism?” he asked the alumni, “are you active whenever your skin is threatened or are you active on a daily basis? Are you going to stand up and do something and transform this society and not wait for a minister of finance to be fired?”

Building a country, he said, would require every single person making their contribution every single day. “Our country is locked in a civil war here, the only good guys here are you and people like you.”

Poplak’s colleague, Daily Maverick investigative journalist Pauli van Wyk agreed. South Africa, she said, had been failed by the very people who should have been protecting it; journalists, accountants, lawyers and consultants.

“The watchdogs didn’t cover ourselves in glory,” she said, citing the story of Sipho Malaba a partner at accountants KPMG, who despite a basic salary of R130 000 per month, excluding annual performance bonuses, had done his utmost to shield the looting of VBS Bank from the Reserve Bank and from other regulators.

“R2.7-billion, belonging to the poorest of the poor in this country, was robbed,” Van Wyk said.

But then there were also heroes, she said, people like Martha Ngoyi from Prasa who blew the whistle on wrongdoings at VBS, when she was instructed to deposit funds there or Mariette Venter from Capricorn Municipality who did the same. Both of them were suspended – and remain so to this day.

Corporate South Africa was a reflection of its society; for everyone bending and breaking the rules, there were those fearless enough to stand up. As much as people might be despondent about the revelations emanating from state sponsored commissions like the Deputy Chief Justice Raymond Zondo’s into state capture, these too were encouraging signs of a society practising candour and trying to clean itself of the filth of corruption.

“The time to be politically inactive has gone,” she warned, South Africa could not afford to go down the same path again.

Poplak agreed, noting specifically that business management students were particularly well suited to becoming guardians of an ethically sound future through the benefit of being taught to comprehend complexity and causality, as well as realise the inherent danger of social media which reduced the most complex concepts to nothing.

“You understand exactly how complex societies are and that without ethics as a moderating factor, everything gets out of control. What holds things together is not smart people but ethical values. It has to come from within; a fish rots from the head and if number one is rotten there is little to no incentive for number two to be better. You all know what’s wrong, just do what’s right.”

Van Wyk echoed him: “As citizens of this country and this continent, you have to choose, profit or doing the right thing. McKinsey chased a fantastic contract with Eskom and allowed themselves to be told who to partner with without doing due diligence – or maybe they did and didn’t care. In the end McKinsey had to close their offices and slink away.”

Her advice to corporates was to initiate a whistle blowing department and get proper political analysis about possible risks to protect themselves in future business dealings: and avoid the pitfalls of becoming like Bain, McKinsey or KPMG.

“Sometimes money speaks louder, if you think short-term,” she said.

Henley Africa dean and director Jon Foster-Pedley said the two journalists had provided alumni with precisely the kind of real-life, real-time testimonies they needed to flesh out the theories they were learning and the scenarios they were discussing in class.

“We know the insidious evil of state capture and the corporate collusion that underpins it, we know the broad brush strokes too, but tonight thanks to Richard and Pauli, we were given a glimpse into the minutiae; the other elements of this cancer that threatens us all and of just how the malignant tumours can spread and metastasize until the entire fabric of our society is fatally threatened.

“We owe Richard and Pauli, and the other fearless journalists like them, an incredible debt of thanks for the work they’ve done, and we need to accept their challenge to do everything in our power to speak out, to be committed citizens and redouble our efforts as corporate activists.”