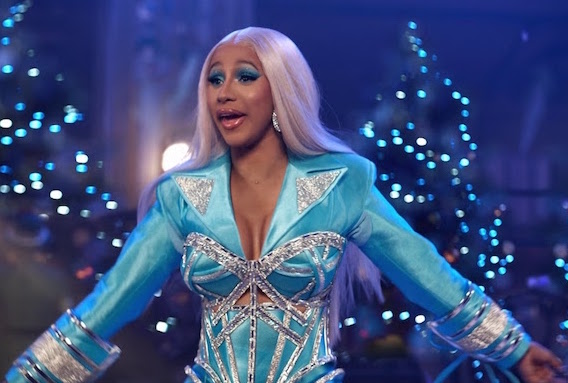 Photo: Pepsi's 'Gift it Forward' ad with Cardi B

It’s tradition for us to celebrate the best of the festive season ads and this year is no different. In general the Christmas commercials of 2019 seem slightly lacklustre compared to other years – more manipulation than magic. But it’s still the most wonderful time of the year and these are the ads which stood out for me.

Hafod Hardware, a locally owned store in Rhayader, Wales, released a nostalgic Christmas commercial #BeAKidThisChristmas which is making viewers cry. The two-year-old star of the advert is Arthur Jones. His father, Tom Jones (I know right!) runs the hardware store with his parents. The video was shot by a friend, Josh Holdaway, in one day for less than £100.

These are some of the viewer comments on YouTube – “This is not an ad this is art” and “This is like the light at the end of the Black Friday tunnel  when the whole world is crazed”. Soundtrack is a make or break for an ad like this and the cover of 1980’s band Alphaville’s ‘Forever Young’ by singer Andrea von Kampen is perfection – little wonder the commercial gone viral.

Quite a few of the festive Season ads this year lack either the story or the product placement. Not so with Tesco’s time travelling van in #DeliveringChristmas. The ad has a ‘Back to the Future’ vibe with a food truck driver delivering to Victorian-era England and awing the crowds with “food from the future.” There are also deliveries to War World II, a ’90s rave, Buckingham Palace and more. The highlights are most certainly the array of Tesco products dropped off at each venue. Mouth watering – so five stars to Tesco for making their produce the star of the show.

With over six million views on YouTube Pepsi did something right with their Cardi B Gift it Forward ad. In keeping with their trend of using celebrities (here’s the Nicki Minaj one) Cardi B get’s to be both naughty and nice. It’s a fresh ad, a touch crass but also cute, especially when she tells the twerking elf, “Try less hands and more hips.”

Coca-Cola’s ad is more around trying to unite the world this Christmas with a message of inclusivity and the need to welcome Santa into your home. Santa in this case is, I guess, a metaphor for the “stranger” or the” other” or in 2019, sadly, the refugee. I like it and think Coke took a risk with this as it is weightier than their previous fizzy festive season ads.

Apple gets it right with this Holiday ad. It’s authentic (give the kids a device to shut them up this holidays) touching and showcases Apple technology. It is interesting to see the emerging trend of using “real” people compared with last year’s animated commercial.  The current one is more like watching a beautifully crafted short film and, as they say, “Sometimes, the best gifts can come from the most unexpected places.”

There has to be one animal-centric advert on the list and Santa’s Little Helper (RSPCA) is my winner in 2019. The two minute commercial features Tiny Tink the rescue pony who has big dreams. As the RSPCA explains on YouTube, “She’s always wanted to be one of Santa’s herd helping other vulnerable animals, and find her very own forever home.” It touches the heart strings and the purse strings. Plus we’re seeing another 1980’s cover version being used to beautiful effect here as Lucy Ellie’s covers “Nothing’s Gonna Stop Us Now.”  Is this a trend we’re going to see more of in 2020?

Ikea’s Silence the Critics #WonderfulEveryday ad is fresh, funny and taps into the anxiety many people feel over the Festive Season when they’re entertaining.  D Double E raps about the family’s well worn home and the ad cleverly shows what a difference some choice Ikea purchases can make. Sorry John Lewis your Excitable Edgar ad didn’t quite make the grade and neither did Sainsbury’s Nicholas the Sweep – maybe next year.

Sheila McGillivray, Tribe Leader, at One Lady & A Tribe, a collaboration of like-minded professionals exploring unchartered strategic angles for brands. At our core is a commitment to Cause Marketing – we like to think that we’ve made a difference when the Tribe has spoken.