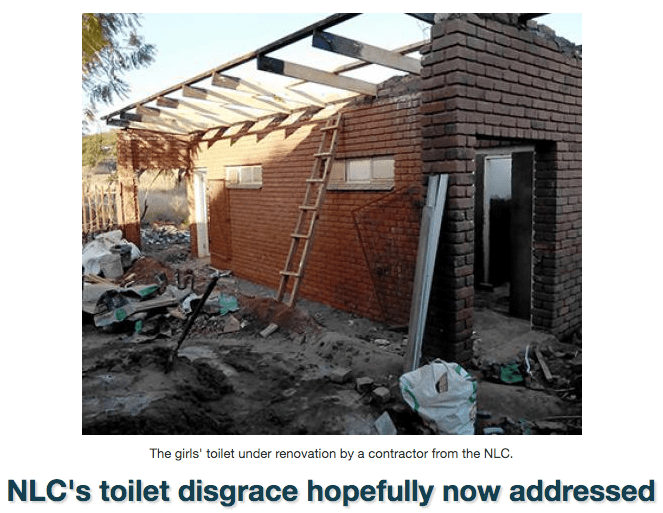 A screenshot of a Limpopo Mirror story on alleged NLC corruption

A correspondent for for the Zoutpansberger and Limpopo Mirror has received a threatening phone call telling him to stop investigating corruption at a National Lotteries Commission-funded project, or he would be followed and hurt.

Publisher Anton van Zyl told the South African National Editors’ Forum (Sanef) the correspondent had requested information about the non-profit, Vyeboom Youth Development, which had received at least R15 million from the National Lotteries Commission (NLC) in the past few years.

Van Zyl said the threat was reported to the local police and a case of intimidation was being investigated.

“We don’t take kindly to such threats to our journalists, and we view it as a direct attack on media freedom and the constitutional values that we hold dear. The only way we can effectively respond to such threats is to shine a light on what is happening and try and establish why people would want to hide the truth,” Van Zyl said.

Sanef has condemned the threats made against the journalist working on the story for community newspapers, Zoutpansberger and Limpopo Mirror.

“Sanef believes it is inexcusable for individuals to threaten the journalist. We trust that the police will give this matter the urgency it deserves and identify the culprits,” it said in a statement.

It added that it was “disturbed by the reluctance of the National Lotteries Commission to release information about NPOs that it is funding despite the minister of trade and industry Ebrahim Patel’s clear statement in reply to a Parliamentary question last month that the NLC must make the list of non-profit organisations that it funds available”.

The NLC has for the last 18 years published these and other details on projects it funds as part of its annual reports. But last year it did an about-turn and excluded this information from its 2018-19 report.

SANEF and Media Monitoring Africa (MMA) are proceeding with a court application which challenges the constitutionality of Regulation 8 of the Lotteries Act to ensure that it is either set aside in its entirety or amended to bring it in line with the Constitution.

Regulation 8 limits the disclosure of information on grant applications and grants themselves. Regulation 8(3) renders any person who discloses and publishes such information guilty of a criminal offence. This prohibition extends even to situations in which the disclosure or publication of information would be in the public interest – for instance, in order to bring to light allegations of corruption or maladministration regarding the manner in which public funds are being spent.

“Our legal counsel is of the view that the current wording of Regulation 8 is an unjustifiable limitation on the right to freedom of expression, and that journalists are at risk of facing future litigation or criminal complaints from the NLC,” Sanef said. “The broad aim of the legal challenge is to shield news publications and journalists, who may want to publish NLC grant information in future, from being subject to litigation or criminal complaints.”