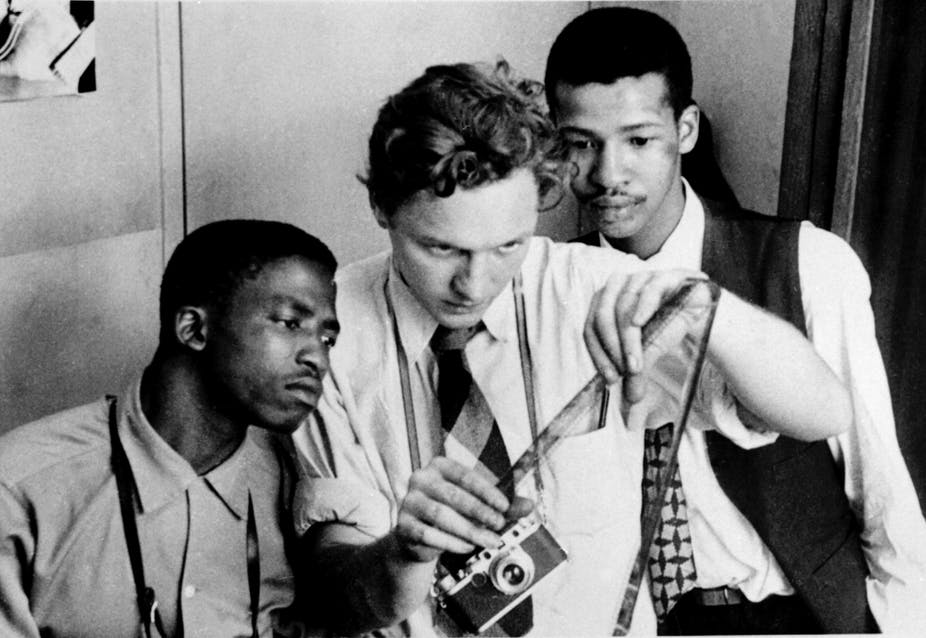 I read about Jürgen Schadeberg’s death while listening to Abdullah Ibrahim’s song Threshold and thought about how, in the last two years, so many of the great photographers whose work helped us to see not only apartheid’s divides, but also beyond them, have crossed the threshold from life to death.

David Goldblatt and Sam Nzima died in 2018; Cloete Breytenbach, Tracey Derrick and Herbert Mabuza in 2019; Santu Mofokeng, John Liebenberg, George Hallett and Schadeberg in 2020. Collectively, their work provides us with a critical mirror with which to interrogate the catastrophe that was apartheid, and the long struggle to bring about its end.

And their photographs also make it possible to see the magic in this place, and to marvel at how hope and beauty persist in South Africa, even in the darkest of times. As historian John Edwin Mason writes of the group of photographers that Schadeberg mentored at the iconic Drum magazine – a team that included Ernest Cole, Bob Gosani, Alf Kumalo and Peter Magubane – “It’s impossible to imagine South African photography without them.” The International Center for Photography awarded the Cornell Capa Lifetime Achievement Award to Schadeberg in 2014 for his career, which spanned over six decades.

I cannot look at Schadeberg’s startling photograph of Hans Prignitz performing a handstand with just one hand, precariously balanced on a rain-slicked ledge high above the city of Hamburg, half obliterated by mist, without a shiver going through me. It was taken three years after the end of the Second World War and two years before Schadeberg left Germany for South Africa, where the photographer was to play a key role in documenting the first two decades of apartheid.

Schadeberg’s photograph of Constance Molefe, bounding over a tennis net, racket suspended in mid-air, gives me a corresponding shudder. This time not only because she appears so close to catching her foot in the net and falling painfully to the ground, but because of the knowledge that her hopes for a career as a professional athlete will soon be dashed. The Group Areas Development Act was made law in 1955, the same year the photograph was taken, and the ruinous Bantu Education Act had been passed two years before.

The caption that accompanied the image of the tennis player in the June 1955 issue of Drum reads: “Transvaal’s little Mo – Constance Molefe, junior tennis star, who aims to take the senior title. Few African women ever reach the tennis limelight, even if they do, it’s usually at a late age. But there is today a steady flow of girl learners, under expert guidance, and we can expect a tennis boom for our ladies in the near future. Topping Transvaal’s junior is pretty Constance Molefe, a 16 year old primary schooler from Orlando. She’s fresh and young, energetic, a glutton for hard court practice, and shows remarkable ability for a girl of her age.”

Constance Molefe’s joyful leap towards the freedom that lay outside the ever-tightening restrictions of the apartheid state was not to be realised for 40 years. In Schadeberg’s image, she is fixed in flight, reaching for the future. The image can be seen here in the Bailey’s African History Archive.

Schadeberg took what he considered his first “real” photograph in an air raid shelter in Berlin in 1941, at the tender age of 10, and went on to produce iconic images of many of the most important individuals and events in South African history.

He is sometimes, incorrectly and in a manner that is somewhat patronising towards the photographers he worked alongside, referred to as “the father of South African photography”.

In truth, he was not much older than the photographers he trained and who, in turn, inducted him into South African life. Schadeberg was just 20 when he took up the position of chief photographer and photo editor at the newly established Drum. He was also one among many photographers who left Europe as a result of the war.

Many of those who arrived in South Africa before him, during the 1930s and early 1940s, were Jewish refugees who had no choice but to flee. They, like Schadeberg, brought along new techniques and ways of seeing that coincided with the advent of popular “picture magazines”, like Life, Look and Picture Post in the US and the UK, and Drum and Zonk! African People’s Pictorial in South Africa, which published photo-essays and provided photographers with regular work.

As curator and documentarian Candice Jansen has noted, Drum was just as central to the making of Schadeberg as a photojournalist as he was to the making of South African visual history. The magazine’s photographers captured images of famous and not-yet-famous people, immortalised life in Sophiatown and resistance to forced removals, and recorded the new forms of popular culture – fashion, jazz and dancing – that defined what has come to be known as the “Drum decade”.

Schadeberg worked alongside Magubane and documented the Defiance Campaign and the famous Women’s March to protest against being forced to carry passes in 1956. They were both arrested (Schadeberg once and Magubane four times) for taking photographs of the Treason Trial, which took place between 1956 and 1961.

Schadeberg and Magubane were among the photographers who documented the aftermath of the Sharpeville Massacre on 21 March 1960, when police opened fire on a gathering of approximately 7,000 unarmed people who were protesting against pass laws. In just two minutes, the police shot 13,000 bullets into the crowd and 69 people were killed, most shot in the back as they were running away, and more than 300 wounded.

Schadeberg chartered a plane to photograph the mass funeral and took a chilling image of hundreds of mourners watching as flatbed trucks carried the coffins of those who were murdered across a field in the Phelindaba cemetery at Sharpeville. In the foreground of the image is a row of priests standing before the dark, symmetrical, empty graves. The photographer donated this photograph to the art collection of the South African Constitutional Court.

Schadeberg is justifiably best known for his portraits of Nelson Mandela, and of jazz greats like Miriam Makeba and Hugh Masekela, but his oeuvre includes many images of everyday people whose stories would otherwise have gone untold.

The gift of the work that he created alongside his compatriots lies in their depiction of the social worlds that apartheid sought to destroy, but that live on through their photographs. Hamba kahle (go well), Jürgen Schadeberg, 1931-2020.