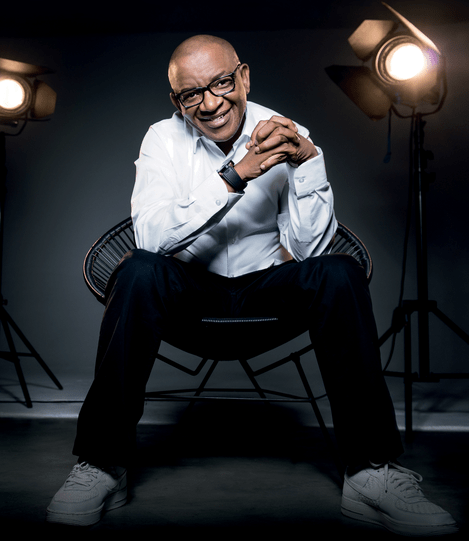 He’s the first voice you hear in The Lion King, a highlight of Hans Zimmer’s Oscar-winning soundtrack. He’s won a Grammy, been nominated for a Tony for his work on the highest-grossing Broadway production of all time, executive produced the opening and closing ceremonies of the 2010 FIFA World Cup, had his songs streamed over 250 million times on Spotify alone, and won the 2020 DStv Mzansi Viewer’s Choice 1Life Legend Award.

Now the circle of life has brought Soweto-born Lebo M back to South Africa, where he’s currently in production on Lebo M – Coming Home, the next Showmax Original reality series, launching in November 2020.

While the 10-part show will give fans a front-row seat to his career as he creates new music with the likes of Zahara, Ladysmith Black Mambazo, Judith Sephuma, and his daughter Refi, it will also turn the spotlight onto his biggest dream: bringing his family together.

Lebo M has been married three times, helping to raise nine children along the way, one of whom tragically passed away.

As the reality show starts, Lebo M is living on an equestrian estate in Blair Athol. He shares the mansion with Angela Ngani-Casara, his third wife; his 90-something mother and four of his children. Lulo is his five-year-old daughter with Generations: The Legacy star Zoe Mthiyane. Letti is his nine-year-old daughter with Angela. And Mthunzi and Ketso are Angela’s teenage children from previous relationships.

“I was initially sceptical about a reality show,” says Lebo M. “But having recently learned no one really knows who I really am in South Africa, my beloved home country of birth, I’ve become romantic about opening up and having my fans and audience here hang out with Angela and my kids via this conversation in 10 episodes.”

Lebo M is also trying to improve his relationship with his four eldest children: Zakiya, Nthabiseng and Refi, who are all still living in the USA, and Tshepiso, his only surviving son, who lives in Midrand and has just become a father himself.

As the season progresses, fans will learn more about Lebo M’s remarkable life. How he got his musical break as a nine-year-old. His memories of the 1976 Soweto uprising. How he went into exile in Lesotho by mistake as a teenager. How he spent time living on the streets in the USA. How he’s stayed clean for the last 15 years after overcoming his alcohol addiction.

He’ll also share insider stories from his legendary career, which has included scoring the Oscar-nominated documentary Long Night’s Journey Into Day; contributing to the soundtrack of the #1 box office hit Congo, and working with the likes of Oscar winner Hans Zimmer and Grammy Legend Award winner Quincy Jones.

Lebo M – Coming Home is the debut reality series from Dopezuluboi Productions, founded by Teddy Geldart, who directed two seasons of Being Bonang and was executive producer of the SAFTA-winning Living The Dream With Somizi S4 and this year’s other hit reality show, Kwa Mam’Mkhize.

Lebo M – Coming Home is the third Original reality series this year from Showmax, after Somizi & Mohale: The Union broke the overall first-day viewing record on Showmax and Life With Kelly Khumalo became the fastest Showmax Original to top one million views.

Other upcoming Showmax Originals include the Megan Fox action movie Rogue, due 3 December 2020, as well as the long-awaited second season of the South African Film and Television Award (SAFTA)-winning comedy, Tali’s Wedding Diary; the nightclub-set murder mystery Skemerdans; and the small-town horror Dam, all expected in early 2021.