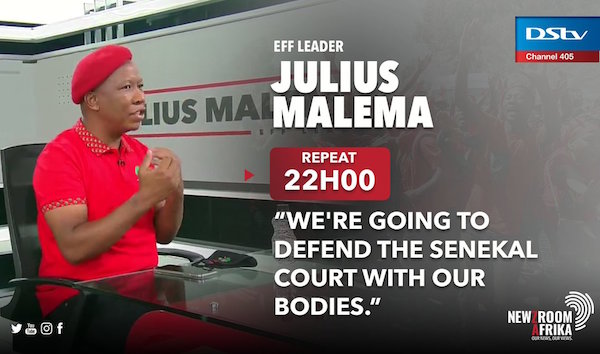 Last week I warned you the narrative was wrong; here we sit on the morning of what might be the brink of #CivilWar. #Senekal, a little-known town before last week, now becomes the scene of a Tarantino movie of political electioneering and diversion.

Malema, the man who did not appear when a high-profile member of the ANC and his stepson was accused of raping two eight-year-old black girls.  Malema who slammed #Sodi’s arrest after a diabolical testimony that should have sent the man directly to jail. Malema who chose to pick the race game in #Senekal as he played out a narrative where he professes to be protecting our courts and constitution.

I shook my head so hard as I watched the interview on Newzroom (still waxing lyrical about this great station) where Malema constantly referred to white racist farmers that are responsible for apartheid, he said they came with arms 30 years ago and that black people fought with stones. He said that they would protect the court with their “bodies” and that they would fight back but he also said there were going to a peaceful protest.  He said he didn’t need guns and showed us a “karate chop” as his examples of his “defence strategy”.

Earlier he tweeted a pic of an AK47 for his so-called peaceful protest. Marra Julius, when you turned up at your peaceful protest at Clicks you left burning buildings in your departure and your payback was that a brand of shampoo left the shelves for 10 days.  Of course, YOU didn’t do anything, you never do, you just take to Twitter to spread hate and more importantly to create diversion, then you turn up, stuff shit up and leave. What on earth is up with you Juju, are you just struggling to stay relevant?

AfriForum joined the ring because you see they also profess to want peace.  Whatever! Why don’t you use your energy to put better security at the farms you profess to care about?

And just like that, our country stands on the brink of a race-related civil war.  Well it was time for the race issue to take the real foreground, isn’t it? Clicks didn’t quite do it see.

#BellPottinger keeps ringing in my head. Chris Roper put it perfectly in his article in the Financial Mail: “Both parties are playing the same game, posturing for profit and pushing violence, that Viagra for the revolutionary who can’t get it up any other way.”

Look around you South Africa.  What do you see?  I see a bunch of criminals being arrested and a serious amount of “grassing up” going on in the high ranks. (For those who don’t know – to “grass up” is to be an impimpi or a klikkerbek)  The #MK (why are they still relevant?) stood by #Ace in what can only be described as BS, it was as contrived as #CarlNiehaus’ suit (did he only buy the one? I wonder if his mum chose it?) Then, #Mbaks basically put it in writing.  He named them – Zuma, Niehaus, Ace, Maphatsoe, Mkhwebane – he retracted that one tweet but refused to drop the volume of his voice as he went on a Twitter tirade and we all know that very soon he will be dropping files. You go #Razmataz, do it. #FearFokol – It’s time.

What else do you see SA? Do you see that the #ZondoCommission has named too many high profile people and insisted that #uBaba be in court regardless of Zuma’s downright obstinance, the pressure is on like never before?

Zondo heard about another R8m that Zuma insisted was paid to a chommie from Transnet, this will be witness number 35 who has implicated JZ.  THIRTY FIVE! Come on guys, 35? Salim Essa and Ben Ngubane were the butt of Zondo’s jokes as he laughs instead of cries this week.  You want to see a fighter that cares about our country #CIC?  His name is DCJ Raymond Zondo.

You may also remember, and you’ll have to cast your mind way back here, we are still waiting for the half a trillion dollars to be accounted for.

Are you seeing it yet SA? Or are you still focusing on how the EFF vs AfriForum ring is being set up? I watched a head honcho of the farmers talk on #Newzroom, (there’s that station again), and he spoke so much sense.  He didn’t focus on black or white, he focused on farmers. He said that farming has such a bad rep that in 20 years’ time there will be no farmers. He said our food security is good right now but it’s our children’s food that matters.  He spoke of endless stock theft and explained how no one in their 20s today wants to be a farmer and that is a very dangerous situation for our country.

And what about the DA, SA? Did you see them this week? Didn’t they produce some manifesto declaring farm murders a hate crime a while back and yet #Mazzonne wants to arrest #Malema for inciting violence? What about protecting the farmers? Haibo, it seems all of the politicians in the world have something to say about murders that take place on farms, yet when it actually means something, they use it to bring our country to its knees.

Today I pray that Bheki Cele enters the middle of this boxing ring that has been set up for our viewing and puts a halt to this. If not that, I pray that not a single person turns up today to fight the EFF. There is power in silence, tell the world we will no longer be played. We are concerned with fixing our country not destroying it, and by we I don’t mean white people, I mean all people. Let AfriForum and the EFF take this outside, we have so much more to do SA, don’t fall for it.  Let justice takes its course.

News broke this morning that the accused (one of whom has 16 former arrests) were not near the scene of the crime; testimony comes from one’s mother-in-law and another’s girlfriend, and to be fair, these statements are a bit late out the gate, but what if that R50k reward was abused? What if this is all wrong?

When will we remember that a boy was killed and that his name was #BrendinHorner?

In other news, the President stood up and said we only need four steps to make our country functional again (I didn’t use the word GREAT see?).  I must say that it was a bit of a stretch for me Mr President, it’s very big talk – we’ve been in lockdown for over 200 days sir, and with four steps we are going to be right like #Gigaba? I’ll hold my breath because I have noticed that you are rounding up these tsotsis without saying a word except that the law must run its course. I’m going to sceptically buy-in to your recovery plan, it does sound like a unicorn though, I hope I’m wrong.

#Mpianzi parents sue as they try to recover the loss of their child through pieces of paper, the principal was fired, was he charged with manslaughter at the very least?  The forensic report was damning if I remember accurately, oh and Julius he is white by the way and the child was black – are you there #CIC?  Wait, my bad, you’re protecting our court system with your black belt.

Angelo #Agrizzi is apparently ill, has he got the #Shaiks? Here’s what I don’t get about #Agrizzi; he ‘fessed up, and really ‘fessed up, he accepted his fate (hid his bucks) but accepted that by ‘fessing up he would be in big trouble and yet he is the only one serving time.

The State of Disaster was extended and please don’t ask me to talk about the #CRLCommission I just can’t.

It seems you can’t be an African in the African continent, well that’s according to the WC when a teacher identified himself as African on his CV, you can’t make this shit up.

I’m not surprised that #ThuliMadonsela wants a #DoOver, I do too.