SABC has contingency plans for blackout, warns staff of consequences 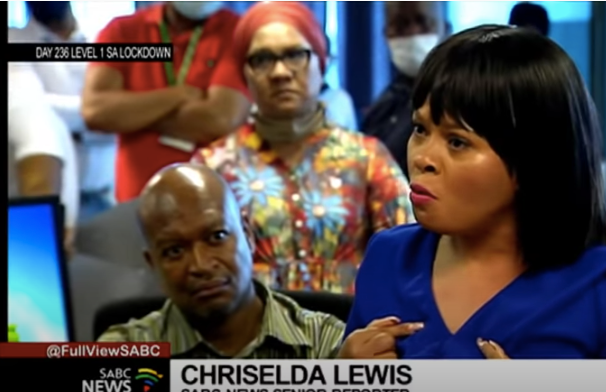 Chriselda Lewis at a meeting of angry SABC staff/Screenshot

The tense confrontation between the South African Broadcasting Corporation, staff and unions escalated today with the threat of a blackout at the public broadcaster. But the broadcaster says it has contingency plans in place.

There will be “consequence management” against any employee involved in the planned blackout, the SABC management warned late on Friday afternoon.

The crisis arose after the SABC issued Section 189 notices to 400 staff members, warning of retrenchments. The issue has loomed for several years as the broadcaster’s financial crisis deepened. Retrenchments have been delayed several times.

In a statement issued late on Friday afternoon, acting spokesperson Mmoni Seapolelo said the SABC was “fully aware of a plan to create ‘a blackout’ on our platforms. We can confirm that there are contingency plans in place that will kick in immediately should this self-induced crisis be precipitated”.

Seapolelo said “irrespective of any planned misconduct or ill-discipline”, the SABC remained committed to ensuring viewers had access to all its programming.

“The SABC has a statutory duty and public mandate to provide uninterrupted radio and television services for millions of South Africans, noting that many households depend primarily on the SABC for their information,” she said.

Meanwhile, on Thursday and Friday the South African National Editors Forum (Sanef) met with SABC editors and executives respectively. It has suggested a mediated process to “resolve the impasse, as the instability in the news division at the public broadcaster threatens its ability to deliver on its expansive, but sadly unfunded public mandate”.

Staff began a go-slow on Tuesday this week as news of the Section 189 notices took hold. They held lunchtime pickets, joined by unions. Later on Tuesday, the secretariat for the alliance – comprising the ANC, SACP and Cosatu – called on alliance formations to support the Communications Workers Union and fight against retrenchments.

TimesLIVE reported on a meeting in which an angry news presenter and journalist, Chriselda Lewis, pleaded with group executive for news Phathiswa Magopeni to reconsider the public broadcaster’s stance on retrenchments.

The SABC board and senior management were called to a meeting with communications minister Stella Ndabeni Abrahams that evening to “”to account to the minister on the merits of continuing with the retrenchment process”. The minister, said her office, “took the opportunity to implore the SABC board to consider all possible options, with an aim to preserve jobs”.

The following day, news broke that the board had suspended the retrenchment process for seven days for “further consultations” with staff. But this will only delay the inevitable.

Chairperson of the board, Bongumusa Makhathini, told Business Day job cuts were unavoidable if the public broadcaster was to prevent a collapse similar to national carrier SAA.

The SABC needed at least R1 billion a year from government, something it just doesn’t have. And with advertising down and the impact of Covid-19 to take into account plus a R511 million loss for 2019/2020, the SABC is fast running out of options.

With a wage bill of R3 billion a year – that is 40% of the SABC’s revenue – and over 3 000 employees, today’s planned blackout is unlikely to be the last act of attrition by a staff angered by years mismanagement by government and management that they are now paying for.