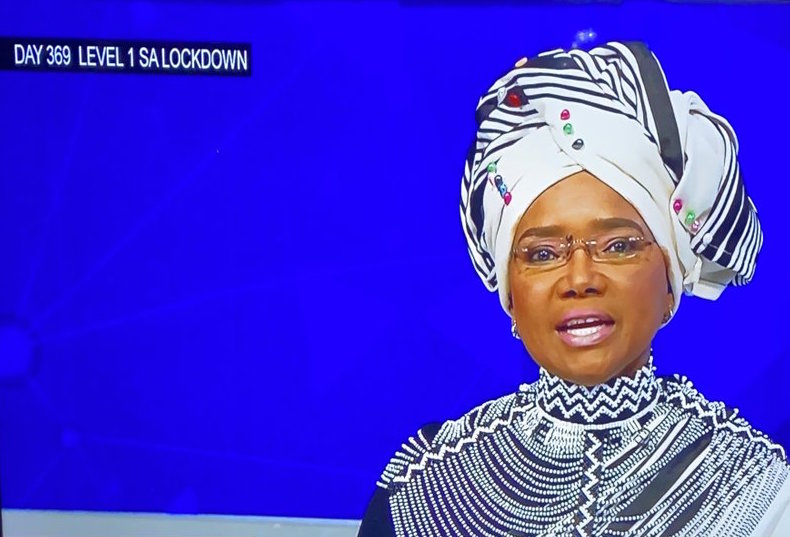 ‘Ndinithanda nonke emakhaya (I love you all)’ is a term used by and associated with broadcast legend, Noxolo Grootboom. She graced our screens for decades and on Tuesday, 30 March 2021, after 37 years in the media industry, she read her final isiXhosa news bulletin for the SABC.

President Cyril Ramaphosa postponed his address to the nation to allow South Africans to watch Grootboom one last time. You know you are famous when the president postpones his address so you can do your thing.

In her interview with eNCA, uMamNoxolo gave her fans all the credit for her fame. Noxolo said she realised a long time ago that her fate did not lie in her employer’s hands, but rather her audience, and if they trusted and respected her, then she would have longevity.

The love shown on social media is testimony to the brand Noxolo has built over the years and the connection she made with hundreds of thousands of South Africans every evening. We could argue she has done so by being entirely herself and by taking ownership of her destiny.

“I made a conscious decision to call it a day at 60,” she said in a radio interview. If you observe Noxolo’s rise and the decisions she’s made, it becomes clear there is method here – and lessons we can all take something valuable from.

Let’s look at her personal branding choices that might encourage you to live your brand as Noxolo did for 37 years.

Never let anything hold you back

From typing one day to being a newsreader the next, Noxolo learnt on the job. In her interview, she recalled being a secretary at the SABC in the 1980s when one day she was asked to fill in for an absent newsreader at the spur of the moment. When not in front of the camera, Noxolo also worked as an editor on the isiXhosa news desk.

In an interview with thebar. Magazine, she said she used her job as a typist to get to where she really wanted to be. “I never looked down on that. I told myself this was an opportunity, a window I will use as my foot in the door at the SABC.”

Lesson: Find your ‘why’ and live your brand. Noxolo’s open, warm-hearted personal style has been her winning formula for years. She informed and educated as well as moved the country with love. Yes, many people report the news, but Noxolo did it in such a way that many viewers thought of her as family, joining them for supper every evening. She’s been called ‘a national treasure’ and ‘Queen of News’, yet it’s Noxolo’s down-to-earth approach which has endeared her to so many.

Lesson: Take ownership of your destiny

Noxolo has been a significant contributor to the country’s history through covering many historic events. Her career highlights include broadcasting the funerals of former SACP general secretary, Chris Hani, Winnie Madikizela-Mandela, and Nelson Mandela.

What can you do to propel others?

Lesson: Use your natural gifts and talents to inspire and help others

The veteran broadcaster surprised actress Zenande Mfenyane, who plays Goodness on South African soap, ‘The Queen’, with a call where she complimented her on her impressive acting skills.

Many celebs, co-workers, and people in the media industry have thanked Noxolo for her mentoring, her love and support, and her openness to share the tips and tricks of the trade.

Yvonne Chaka Chaka said on Twitter: “She was the most beautiful teacher I had at Jabulani.”

Many remembered Noxolo’s powerful tribute to the late Akhumzi Jezile and thanked her for always showing love and compassion to those around her, as well as to the ordinary man on the street.

On her exit, Noxolo said she felt like it was her funeral while she was alive. Being praised and celebrated – a moment she would cherish always.

Lesson: Having self-confidence and self-belief is important to build a strong personal brand.

Noxolo made an art of presenting the news in her home language isiXhosa and exposed many to the richness of the language.

The multilingual Aaron Moloisi praised Noxolo for embracing her culture and language. He said she was an inspiration to him and many others in South Africa.

From watching the different interviews and reading the social messages, it’s clear Noxolo has a brand that will be remembered years from now.

Personal branding isn’t just for the rich and famous; creating your own personal brand can help you forge ahead in your own career and reach new professional heights. After all, your story, no matter how insignificant you might think it is, could inspire someone who needs it most.