LATEST NEWS
Home Out of Home What’s bigger than a billboard? Tractor Outdoor partners with Brutal Fruit to bring consumers’ messages of celebration to life

What’s bigger than a billboard? Tractor Outdoor partners with Brutal Fruit to bring consumers’ messages of celebration to life 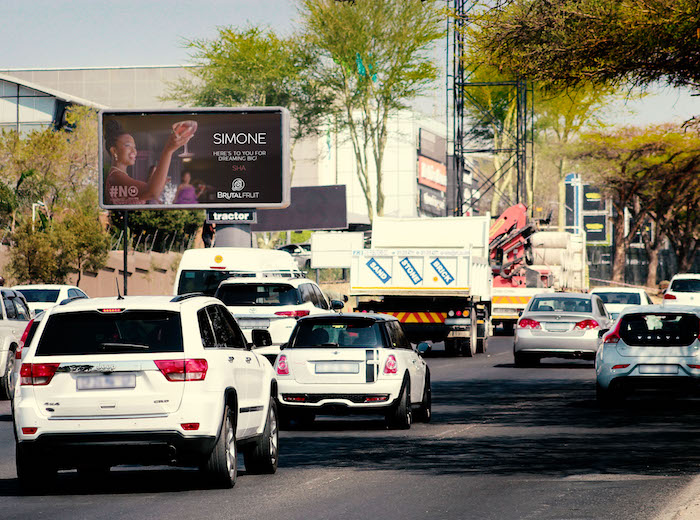 [PRESS OFFICE] Emihle, Here’s to you for dreaming big!  – Sisipho

Tractor Outdoor recently partnered with Brutal Fruit in an impactful activation that demonstrated exactly how out-of-home media can integrate seamlessly within an omni-channel strategy, to stunning effect.

In order to promote the elegant 620ml ‘Grand Luxe’ edition of its much-loved Ruby Apple Spritzer, Brutal Fruit launched #YouBelongToCelebrate; a campaign that would see its customers celebrate those wins that take one to the next level, in a through-the-line approach that encompassed television, social, digital and out of home (OOH) media.

Says Remi du Preez, commercial director at Tractor Outdoor: “We wanted to extend and build on the #YouBelongToCelebrate concept, giving it a larger-than-life presence.

“We devised an application that would engage our DOOHshare platform to broadcast personalised messages created by Brutal Fruit’s audience on digital billboards for all to see – igniting the spirit of celebration.”

DOOHshare is effectively a ‘shareable billboard’; a fully-customisable cross-platform that allows a user to submit personalised content through a mobi-site, which is subsequently flighted on a digital billboard.

Du Preez explains that DOOHshare allows for a seamless integration between social, digital and outdoor media, and that the opportunities for customisation are endless. “Once creating their personalised shout-out, users were even able to select the billboard their message would appear on, enhancing the experience even further.

“Each message is moderated and once approved, the visuals are scheduled to be flighted on the selected billboard at a pre-determined time and date.

“To further bring this concept to life, the user also receives an in-situ image of their message on the chosen billboard, which they’re able to share on social media – extending the reach of the campaign through leveraging the social networks of users.”

The campaign’s results speak for themselves: According to Telmar (Outdoor Measurement Council ROAD data), almost 600 messages were submitted in three weeks and the resulting creative was viewed by 1 055 912 consumers more than 9 756 685 times. “This application truly connected consumers’ digital experience with the real-life world, effectively blurring the line between two.

“A significant drawcard and benefit to advertisers is that the personalised nature of the application – which makes the user and their chosen recipient the ‘star’ of the campaign – automatically results in a highly engaged, more invested audience member, as they effectively ‘co-create’ their advertising campaign together with the brand.

Du Preez concludes by acknowledging Tractor’s senior account manager for the Brutal Fruit account, Terry Paterson, who he says has played an “integral role in bringing this impactful application to fruition.”

Watch the campaign case study below.