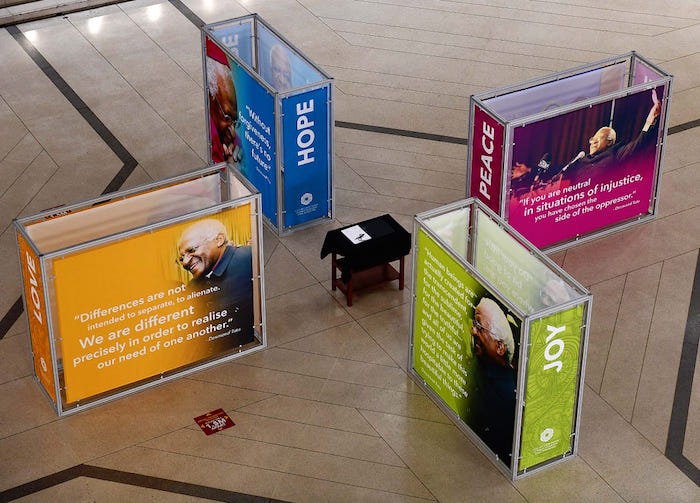 Acumen Media’s Tonya Khoury puts 2021 in perspective in this report.

I’m back! And ready to wrap up what you missed in the past few weeks. Like you, I haven’t watched the news for three weeks except for those stories that smacked me in the face. But I have a clever machine that allows me to go back in time and see what  the big stories were that I missed out on. Join me, Tonya Khoury,  as we #ScratchTheSurface of the news media you chose to ignore while I was gone.

#2021 would just not die. It was like that cockroach you jump on. And empty a can of Doom over, yet it remains alive and is still kicking two days later. It was a mess. Even my personal journey was a horror show, and ChristmasDay is one that I’d rather forget. My Mom was in hospital and I was in a hotel, alone and without food like #OliverTwist, but my story wasn’t nearly as sad as 2021’s epilogue.

2021 took the #Arch and I was gutted. Look the man was 90, and we’d be selfish to ask him to live forever, but I am selfish, and I’m selfish because I didn’t want the glory of the former freedom fighters and stalwarts to end. I’m selfish in that I want those men and women back today. I want people who act  with the greater good in mind. The last of the brave! #ArchbishopEmeritus #DesmondTutu thank you for the laugh that we will never forget; for the wise words we now commit to memoirs, and for the fight for the greater good that you fought all your life. How can we ever thank you for your service #TheArch?  We made a pretty good attempt, you’ll be happy to know.

South Africans arose  with the most magnificent tributes. We painted the country purple. Lights turned Table Mountain purple, and other key landscapes were brought alive with his legend. Ten days of mourning followed, where for the most part we celebrated his life, and we reminisced about our sacred past  We lamented, although, in our thoughts and memories we knew that these were days gone by. #AuldLangSyne. That was  26 December, and surely 2021 was done.

Nope, 2021 took #BettyWhite. Look if #MickJagger goes, I’m out, but #Betty, really? We truly believed that she was going to live forever. Even millennials love Betty White. It was in her death that we learnt more about this strong and incredibly funny woman. A freedom fighter in her own right, a person who acted with good intention in all that she did. A woman of grace and bravery. We lost another treasure. Thank you for being a friend.  #RIPBettyWhite

Finally when the new year broke, we didn’t make the fanfare we normally do. We’re suffering from PTSD, see? Too scared to relive an event in case it sets off a trigger. And even though we tried to tread quietly across eggshells, there it was: #ParliamentBurning. I must admit I didn’t even care that much, not until this week while I was researching to write this report today. Seriously? Does the media and the government expect us to believe that some homeless guy broke into parliament and set it alight?  So … Many… Questions.

Where was the security at one of South Africa’s most (supposedly) impenetrable buildings, where was ABC or whoever the armed response was? Surely there would be camera footage – nope that wasn’t working either. They were turned off, I kid you not!  When the ‘fire’ broke out surely those sprinkler things went haywire? They do have them, but they were turned off too? What? Here’s the biggest head-spinner; our homeless guy was carrying explosives! Where did he score those from – supply for his New Year’s Eve fireworks party perhaps? Oh, come on.  Are we meant to buy this drivel?

Listen, if we can resolve one thing this new year let it be this, no more fairy tales. #WeWillNotBePlayed. I’m not done though … it gets better. He had a bundle of papers with him too (apart from some laptops and silver), because paper would … I don’t know, make a nice fire outside for him to keep warm? The useless Hawks who haven’t picked up one, no not one,  of the Zondo Commission perjury cases (and there are hundreds of them), finds this guy in seconds and hands him to the cops before the fire is out. How did they know he did it? There were no cameras and no security. Wait until you hear his name and tell me this is not some kind of bad script: Zandile Christmas Mafe. And to add the shining star on top, rumour has it #DaliMpofu will be defending him. Listen please #FreeZandile and give him a home, and not a bribe to stand for crimes he didn’t commit. #HidingInPlainSight

Oh heavens, you see I’m grumpy again, and I was going to tie this report to something cheerful like Jingle Bells but no, you had to chuck absolute BS in my face, and now what am I supposed to do, let it slide? I’m still not done with this ‘fire’ cracker of a story. The firefighters and emergency response worked flat out for over 24 hours straight without a bottle of water from the City of Cape Town. Nice guys, very nice. Do you know who hydrated and fed our heroes? Us, we did it and when we showed up the City’s poor performance, they quickly arrived with an energy bar and 500ml of water. #PleaseLeaveMyCar took to Twitter for confirmation because to me and to many of you, this was another #insurrection.

I mean last year I took you through the insurrection that  started at #CharlotteMaxeke hospital and unabated   grew throughout 2021. Why should it stop now?  So here I am on Twitter and who do I find but good old #Duduzile Zuma using her old line “We See You – Amandla”.  The same line she used throughout the #Insurrection in July. #BhekiCele, are you reading? I then saw the #EFF celebrate the burning of Parliament by blaming colonialism. My eyes rolled so far backwards I thought I was going to see the back of my head, which is banging with a headache by the way! Please tell me #WeWillNotBePlayed and you saw it too.

And then the #StateCaptureReport was released to the President. It was presented in a beautifully perfect-bound book. May I ask why we went to the trouble of all that printing and binding? For show my #FellowSouthAfricans; for you and me to believe that it actually means something. Like a bad #MatrixSequel, the report will be released in three parts.  e have received part one, my copy is PDF, I don’t need a hard copy, it’s 2022! And the balance will be delivered, (I’m sure ceremoniously) in two more lavish events. Only then will the President act. Why? Well if you think back, these reports are simply “recommendations”. Ah ha, you forgot that bit; believe me the ruling party didn’t.

Allow me to disappoint you even more. There are one thousand four hundred and thirty eight people implicated in the reports … 1 438! We can’t even get #Ace or #uBABA behind bars and now we have 1 500 more  crooks to get through. And what did our President say? “State Capture must never happen again”. What do you mean, Cupcake? You’re still employing these gangsters. Ah, you know what – #BeForgot for the sake of #auldlangsyne

While we rehash three years of #StateCapture across media platforms, #Ramphosa was endorsed for his second term and the #ANCBirthday celebrations kicked off on a golf course. You can tee off with Ramaposer for a mere R350k. Again there is nothing to see here folks, just a broke ruling party pimping out their President. We’ll drink a cup of kindly cheer hey? #auldlangsyne

#Beitbridge became a horror movie as people died to get back into South Africa, and the spirit of #ubuntu (the one thing we never compromise on) was put aside as the #Xenophobic narrative rose from the media streams.

A man with a hammer

And then another bizarre and unreal story hit our screens. A man with a hammer took to #Concourt and started bashing windows! To be fair I can relate. Millions of rands and viewing time that I’ll never get back only amounted to a perfectly bound book and nothing more. Someone pass me that hammer.

The holidays came and went, we forgot about #Covid and now we are all sick! This time with flu from what I can work out. Whatever happened to flu by the way? Yesterday the beaches were shut in Durban for about an hour and they probably thought, “We are going to have a mass uprising if we do that” because within hours they opened them again and let us swim in what smells suspiciously like effluent.

There is some excellent news: #GhislaineMaxwell was found guilty, and now we want to see the black book of clients please. I hope she’s on suicide watch because we don’t want her and Epstein to pair up again.

If ever there was a commercial to get vaxxed it was the #NovakDjokovic story. He’s not allowed to play because he’s unvaxxed. Now roll up your sleeves everyone, there’s no preferential treatment here.

One last horrible story and then I’ll try and cheer you up.  #Putin and #Biden are pushing war buttons, which makes it feel a little like 2020. Remember when we opened with Trump’s assassination of Suleiman, and the nukes were on the table. Let’s just breathe for now, ok?

Here’s my cheer up story. #Sodwana has had a bumper season. The queues to get to the beach stretched almost 5-kilometres outside of the park. That’s excellent news for this little town that has been scourged by #covid. The mantas are back too; I didn’t see them, but there’s a picture with a time stamp so that’s got to be proof.  This weekend I’ll get to the #MantaHunt.

Enjoy your last few days South Africa, let’s leave the noise of politics aside and get some work done. We have much to do in 2022.

My name is Tonya Khoury and you’ve just #scratchedthesurface with Acumen Media.