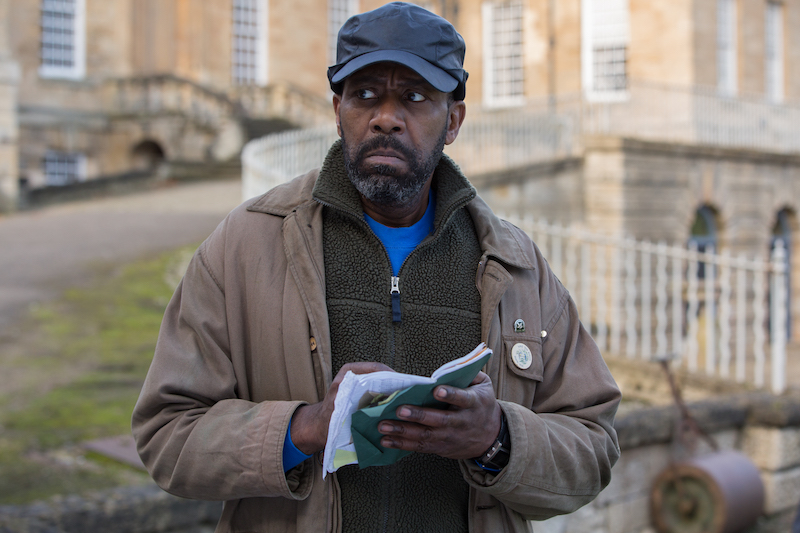 Lenny Henry in The Syndicate on BritBox

An array of British stars shine in The Syndicate currently streaming on BritBox – including South African born Alice Krige. The action all takes place at the crumbling stately home of Hazelwood Manor, life for its few remaining downstairs staff is about to take a dramatic leap upstairs, when their small syndicate beats the unlikely odds and wins the lottery.

Gardener and math enthusiast Godfrey (Lenny Henry, Othello, Harry Potter and the Prisoner of Azkaban), housekeeper Sarah (Cara Theobold, Downton Abbey), cleaner Dawn (Elizabeth Berrington, Mr. Turner), cook Julie (Melanie Hill, Stardust) and gamekeeper-cum-groomsman Sean (Richard Rankin, The Crimson Field) all have to pitch in and do more than one job just to keep the household running smoothly. Now Lord Hazelwood’s health is failing and the second Lady Hazelwood and her son Spencer (Sam Phillips, In The Flesh) – who have grown a little too accustomed to their lives of grandeur – are more concerned with maintaining their lifestyle at Hazelwood Manor than sorting out the estate’s disastrous finances.

Overlooking the seaside town of Scarborough, the once impressive manor has been in the family of Lord Hazelwood (Anthony Andrews, Brideshead Revisited) since his ancestors built it in the 18th century. There used to be more than thirty staff at the house, but now, with a mounting debt of £6.5 million and counting, there are just five remaining since Lord and Lady Hazelwood (Alice Krige, Thor: The Dark World) were forced to let the others go.

With the future of Hazelwood in question and their jobs on the line, the unthinkable happens – the staff wins the lottery! This touching drama from BAFTA award-winning writer Kay Mellor follows the highs and lows of their journey from downstairs to upstairs… There are now 14.5 million reasons why the lives, and loves, of the staff of Hazelwood Manor are about to change beyond recognition – but will the dream of instant riches be different from the reality?

In this interview, Lenny Henry discusses his role in the series.

Have you seen the previous series of The Syndicate?

I was sent an episode by Kay before I went to read for her. I thought it had energy and was vibrant, funny and moving, all the good stuff. I liked the challenge of playing somebody like Godfrey who has borderline Aspergers and behaves in a way that’s perfectly reasonable, then all of a sudden he’ll do things that are seen as a bit strange: talking too loud, interrupting people, getting slightly obsessed with numbers, and then flashes of violent behaviour. He’s highly functioning but it’s something the people at Hazelwood have to deal with continually. I saw these as good challenges because to play someone like this and to show him fitting in, in a family environment clearly means a lot to people sitting at home with Aspergers or borderline autism, thinking ‘yeah actually I could do that too.’ He’s a great character.

It’s a lovely meaty, dramatic role for you: why do you think Kay cast you?

I think Kay wanted to give me a role that wasn’t man in a suit being high status and pointing his finger at things. It’s quite good having played a head teacher and a top chef in a restaurant to be playing a character that is part of an ensemble. Godfrey is very pivotal, but he’s quite a visceral character too, so when you’re watching him you’re thinking does he even know how to tie his shoe laces? You’re moved by him all the time and he’s also providing moments of comic relief which are undercut by some kind of moving shard of his condition. But it’s lovely because he tends to break tension whenever he appears with an incredibly straightforward usually funny request for a crane or something…

How do the others deal with Godfrey?

Kay and I went to the Autism Centre in Leeds and it was extraordinary to have a cup of tea and interact with some of the inhabitants. Godfrey is high functioning and because he’s part of a family environment that doesn’t change from day to day, he feels quite safe. It’s only when he’s overloaded with stimuli from strangers that he tends to react. It was very enlightening to see people with different levels of autism and how they cope with the outside world. The Hazelwood Manor lottery group allow him to be a part of their family survival system, part of Hazelwood’s DNA, they don’t isolate him. Godfrey will say: ‘I’ve got to go and water the delphiniums,’ and what he means is he’s slightly over excited or over angry about something and he needs to take himself out of the environment. He could only have learnt that by taking advice on how to calm down from various members of the syndicate.

Godfrey sets up the syndicate, tell us about that?

Godfrey has a crazy numerical forest in his house, plastered on every single wall. He’s been looking at the lottery for the last five years and working out all the number systems that have been at play with all the winners. He’s been doing Fibonacci numbers, odds and evens, working out clusters of numbers, using string theory. He’s obsessed with numbers and determined that his system is going to be the one that wins. It’s extraordinary, like a Narnia for numbers at Godfrey’s house; he really does know his stuff. It’s just unfortunate that it’s not what he thought it was going to be and that makes him very cross.

Could you tell us about Godfrey’s other obsessions?

Godfrey has lots of pet projects. He’s obsessed with tractors, knows all the numbers, the PC10s, the extended arm cranes, the filters, the hitch holders. He also knows everything about plants because he’s a gardener, so he’s got tonnes of books. He’s not so bothered about clothes, he doesn’t really have good taste. He has a suit that was bought for him for £19.99 when he was in his twenties by his mum. He hasn’t bought another suit since; as long as it keeps him warm, and he can get it on easily and there’s not too many buttons and zips, he’s very happy. But he’s interested in birdsong and tractors and flowers and he makes nettle wine which I’m reliably informed tastes like wee. Everybody makes a show of drinking it but they pour it into the nearest plant. As the series goes on you’ll see it dying episode by episode. But he’s a good egg Godfrey; his obsessions make him.

Tell us about Godfrey’s relationship with Amy?

Amy is determined to be a model or a pop singer or some kind of celebrity. Godfrey has been roped into helping by taking some pictures of her. He’s so lovely and innocent and Amy is so pushy and bossy; she wants to look like Cara Delevingne, but Godfrey’s got this very basic camera that clicks and unclicks for the longest time and Amy doesn’t understand that. Godfrey has probably got several types of camera, from the box one that goes woosh, through to the old school ones. They’re probably antiques and he develops the pictures himself. But he’s saving up for a digital camera because he wants to take very good pictures of Amy to help her in her quest to become the new Cindy Crawford. He just wishes she was a bit more patient because these things take time. You’ve got to remember that Godfrey’s a gardener so he’s used to things taking a season to grow, whilst Amy’s wants it all now.

So how does he feel when she goes missing?

Godfrey is incredibly sad when Amy goes missing especially because he yells at her when she comes to try and comfort him. If you were a viewer watching that, you’d think Godfrey’s so volatile and unpredictable, did he have anything to do with Amy’s disappearance? One of the clever things Kay does is juggle our suspicions throughout the series; it is possible that Godfrey might have something to do with her disappearance, because why wouldn’t he? He’s big, he’s strong, he’s powerful, he’s taken pictures of Amy, he yells at her. He’s kind of scary when he’s losing his temper..

What does Godfrey plan to do with his lottery win?

He wants to buy a tractor and a new camera. The tractor is to help Hazelwood Manor and to mow the lawn better, because the guy who currently does it cuts the heads off important flowers and it really gets on Godfrey’s nerves because he keeps doing it and he doesn’t seem to care. And he wants a new camera because he wants to make Amy happy. He’s also brilliant with numbers and he’d love a new computer to help Hazelwood Manor. Everything he does is with an altruistic frame of mind. There’s no subtext to Godfrey. That’s a clue.

Have you played the lottery yourself?

I won 250 quid on the lottery once. I felt really guilty and gave it to charity straight away. But I think that it’s a bit of hope for people isn’t it? People can dream when they watch this series. Interestingly people who win the lottery are for the most part, altruistic; they want to do things for their family, to buy a house for their gran, to help their uncle with their business or their daughters with their education. There aren’t many who just want to waste it all.

Tell us about working with Kay and filming in the North?

The last time I was here in Leeds, I was doing Othello at the West Yorkshire Playhouse, which was a life changing experience for me. I’ve always been a comedian and made my own work, so to suddenly be acting in Shakespeare was a massive surprise. Every day I woke up like David Byrne: ‘How did I get here? This is not my beautiful house.’ So it’s great to be back in Leeds filming with Kay who I’ve always admired. I loved Band of Gold and Fat Friends. Strangely, I was here in Leeds and she did a workshop of a play that she was working on in 2009, and Barry Rutter and I went to see it and I was very moved by that play. I said to her at the time ‘I’d love to do something with you.’ So here I am and I’m really chuffed. Kay’s top notch, she writes from the heart about real people, real families and real concerns.

Why should people watch The Syndicate 3?

People should watch The Syndicate if they have this wish fulfilment thing going on, if they want to know what people like them would do if they won the lottery. And there’s some very fine acting going on. I like being with these guys. It puts you on your mettle. It’s a challenge for me and I’m loving it. I think you’re going to watch it because you’re curious, there’s a real whodunnit going on in this show, real intrigue.