Media wars: Russia’s invasion of Ukraine has Kremlin battling for hearts and minds at home 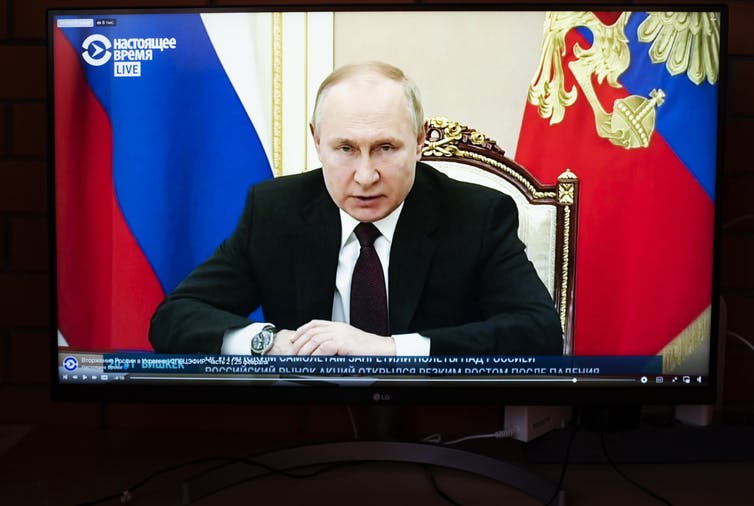 The Kremlin has exerted tight control over news and social media in an effort to control the information Russians receive about the Ukraine war. SOPA Images/LightRocket via Getty Images

Russian President Vladimir Putin is locked in a vicious struggle not only to subjugate Ukraine, but also to keep his own citizens united in support of Kremlin policy. But as Ukrainian fighters capture the admiration of the world in Twitter posts and TikTok videos, even the illusion of Russian unity is beginning to crumble.

A generational struggle is breaking out across Russia. Often, it pits those who believe in the stories of state-run television against their own children, many currently living and working abroad. The latter are turning to social media to express their shock and shame at the war, and to challenge the narrative of the Putin regime.

This is a reality I am experiencing in my personal life, and not just as a scholar of Russian history and media. When my two stepdaughters, aged 28 and 29, phoned their grandmother in Moscow to ask about Russia’s invasion, the response was tears: “How could you ask such a question? Russia does not start wars. Russia does not invade other countries.”

The family’s consensus was that the young women had “totally changed” since becoming American citizens 15 years ago.

The Kremlin tightens its media grip

Inside Russia, the government has been broadcasting pro-Russian messages designed to fill viewers with either pride in their homeland or anger toward purported outside foes. Kremlin-controlled television reports – in very slick, believable stories full of interviews and on-site video – details alleged atrocities committed by neo-Nazi Ukrainians against Russian civilians. Russian correspondents in Ukraine’s Donbas region speak of “mass graves” and “genocide,” displaying what they claim are human bones.

Roskomnadzor, the state censorship agency, has forbidden all media, even independently owned newspapers and radio stations, from using the word “war” instead of “special operation.” Outlets have been ordered to stop spreading “unreliable” information and instructed to rely only on Russian government sources. On state-run television, Ukraine is referred to as a “territory,” not an independent state.

When material began circulating on Twitter that contradicted official pronouncements, the Kremlin limited citizen access. When Facebook fact-checkers challenged the accuracy of certain state media stories, the Kremlin similarly blocked many of Russia’s estimated 70 million Facebook users from logging into the platform.

On 1 March, the government announced that it was shutting down legendary radio station Echo Moscow and taking the one remaining independent TV station Rain off the air. The government accused both of violating rules about coverage and disseminating “fake news.”

Official accounts of Russia’s surprise invasion seek to justify Kremlin actions. A Feb. 27 report on TV station Russia-1 titled ‘Ukraine: How It Was’ described the current conflict as originating in an alleged US betrayal of Russia in 2014.

Putin is shown explaining, in old footage, how Western leaders begged him at the time to stop the pro-Russian president of Ukraine from using violence to disperse protesters gathered in Kyiv’s central square. As Putin tells it, he kept his word, only to have the protesters oust the elected president, and the U.S. applaud the “coup” as a valorous, democratic act.

Such productions are clever, well-produced, and very convincing. A government polling organization claims that 68% of Russians support the country’s actions in Ukraine. Many citizens told reporters of their gratitude for Russian “assistance” in the breakaway Ukraine republics of Donetsk and Luhansk.

Nevertheless, the government cannot totally control the story. On Feb. 26, RIA Novosti, a state-run news agency, and several other outlets accidentally published an essay by a pro-Putin ideologue prematurely celebrating what turned out to be a nonexistent Russian victory. It praised Putin for “settling the Ukrainian question forever” and heralded the dawn of “a new world” now that “Russia unity” has been “restored.”

Fighting for a different story

As fighting continues, many outlets seem unsure of what and how much to say. Sergey Aleksashenko, Russia’s former deputy finance minister during the 1990s under Boris Yeltsin, expressed shock that on 27 February the influential business newspaper Kommersant had managed to avoid any mention of the mobilization against Ukraine. “There’s [coverage of] anti-war protests, but no war,” he tweeted.

Meanwhile, younger Russian journalists are using social media to spread a different story, as are many of the almost 2 million Russians – out of a population of 145 million – who emigrated to the West during the Putin era.

Many are incredulous about both the war and the domestic crackdown. “It’s like everyone in Russia went to sleep Wednesday night in their own country and woke up the next morning in North Korea,” said a former Moscow resident working as an IT administrator in New York City who wished to remain anonymous due to concern for his relatives.

Online Russian journalist Ksenia Sobchak filmed a special report on 24 February directed toward a Russian domestic audience that was designed to expose government lies. It included live Skype interviews with actor Sean Penn and, for Russians, another renowned celebrity, Ukrainian music video producer Alan Badoev. Both men were separately in Kyiv, separately experiencing bombardment. Both were near tears.

Under Putin, public criticism of government policy can qualify as a crime. But a few people inside Russia are using social media to speak out against both the government’s external war in Ukraine and its internal war against freedom of speech.

Vlogger Yury Dud has posted to his 4.9 million Instagram followers examples of courageous Russians voicing opposition to the war. He’s also referenced the silencing of dissent, deploring what he calls the “suppression of the human will in Russia” under the Putin regime.

Moscow’s Tretyakov Gallery has posted an Instagram photo that looks, at first glance, like an ordinary museum tour, but contains a strong, if coded, message. The guide is pictured standing in front of a painting by Vasily Vereshchagin of a mountain of human skulls, entitled “The Apotheosis of War.” The 19th-century artist dedicated his work “to all great conquerors, past, present and to come.” For educated Russians, the allusion to Putin is obvious.

As elites in Russia such as former Prime Minister Dmitry Medvedev make professions of support for Putin, some of their children have signaled doubt. A daughter of Kremlin Press Secretary Dimitri Peskov posted a “No War in Ukraine” message on her Instagram page on the day the invasion was announced. The man engaged to the daughter of Russia’s defense minister posted that what he most wanted for his birthday (that same day) was peace.

All these postings have since been taken down. But according to Instagram, approximately 50,000 pictures with the hashtag #nowar or its Russian equivalent #нетвойне were posted between Feb. 26 and 27 alone and by Feb. 28 totaled over 330,000. A study by The Economist has found anti-war posts on social media originating in Russia’s 50 largest cities and 91 other countries.

[Over 150,000 readers rely on The Conversation’s newsletters to understand the world. Sign up today.]

The western town of Pskov projected ‘No To War‘ in lights onto its Kremlin walls, on 1 March, the 22nd anniversary of a battle in Chechnya that killed most of a paratrooper unit based in the region. The town government posted images of the illumination on Twitter.

But social media is simultaneously seeing an apparent upsurge in Russian patriotism. Also on March 1, the top Twitter hashtag of the past 24 hours was the pro-Russian #ДаПобеде meaning “Yes To Victory.”

People are protesting, but scores of police are also still willing and able to arrest them – so far more than 5 000. Popular opinion in Russia remains divided.