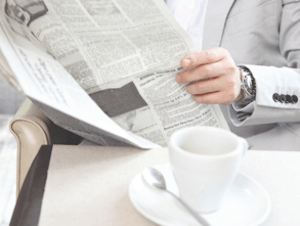 The Media Yearbook, the only one of its kind in Africa, offers an important and independent overview of the media industry in 2015 as well as giving important insight and perspective into global trends and forecasting for 2016. Here journalist, consultant, author and Professor of Journalism at City University London, George Brock explores the changing shape of newspapers and what lies in their future.

Anyone trying to map trends in the world’s newspapers must start with a warning. In many parts of the world, print is no longer a separate sector, industry or market. In Europe (from where I write) and the US, there are barely any newspapers which publish solely in print, and certainly no important ones that do.

Print is not going to disappear on these continents. But for titles with a history in print and which are now both in print and online, the paper edition is shrinking and becoming secondary. That long trend accelerated in 2015. Digital strategy and tactics are what the people in charge of these companies worry about.

But not quite everywhere. It would be surprising if the decline and growth pattern for 2015 and 2016 wasn’t roughly the same as 2014, the last year for which we have numbers. Australia, the US and Europe lost daily newspaper circulation; small gains in Africa, Middle East and Latin America; a big rise in Asia (World Press Trends 2015 Wan-Ifra). 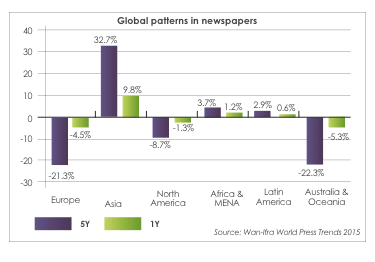 In five European countries and the US, online had clearly outstripped television as the news medium of choice for people under 35 (Reuters Institute Digital News Report 2015).

Pessimism about the ruin of print journalism, which still dominates conference and bar conversations among journalists and news executives, should be offset by two optimistic developments.

First, the accumulating evidence of bustling innovation and start-up. As in any disrupted, inventive era, most start-ups don’t survive. But that has always been the case in such times.

What is now clear from the latest study by academics at Columbia University in New York (Publishing for Peanuts: Innovation and the Journalism Startup– Grennan, Robinson& Shiffrin) is that the recreation of news media is occurring worldwide. The South African examples examined by the Columbia study are the Daily Maverick, Eyewitness News, News Tools and Oxpeckers.

Secondly, note the tendency for the purely online news and opinion sites to start by grabbing all the audience they can get with whatever material works best – and then to shift gear.

Critics of digital journalism complain about superficial clickbait. But Vox makes its unique selling point “explainers” which tell you not only what is happening but why.

News publishers now face a dilemma familiar to any industry amid disruption and continuing innovation. Their traditional revenues are squeezed by the fall in print advertising income while no substitute business model for online has appeared. Nor is a single, “magic bullet” solution likely to appear in 2016.

The odds are low that there will be a simple business model for written journalism like the neat mix of advertising and circulation income which sustained it in the late 20th century.

Publishers and journalists will also face in 2016

Devil and deep blue sea dilemmas over whether or not to partner with the new sovereigns of cyberspace, Facebook, Google and Apple, which now dominate online news distribution.

The tech giants have the software and the speed which newsrooms need to reach Millennials and digital natives.

Newsrooms produce the content the social networks want. But it is not a negotiation between equals.

The greatest single change in the digital age is not the velocity of information, but its quantity. Journalists now manage abundance. The impact of any single piece of journalism is reduced. It also means that the value of any single news item is reduced.

Because the supply of information has increased and that – given that demand for news/opinion is steady – means the price falls. Look at one of the most interesting micropayment experiments begun in Europe, Blendle, and see the average price per article – between ten and twenty cents.

Coping with abundance means that we’ll see a further skill switch in newsrooms.

More reporters with specialised skills in the verification of user-generated material. More reporters with the ability to analyse and display “big data”. More designers and coders who can take that material and shrink it in clever ways for small screens. More video producers. The 2015 upswing in demand for mobile-friendly video will continue.

2016 could be the year in which a prominent paper takes a deep breath and slows down its rate of appearance in print: a daily, say, appears on two weekdays and the weekend instead of every day. (London’s Independent announced in February it was closing its print edition and would only publish online from now on.)

Among the UK papers, my money is on the pathfinder being the Financial Times.

There will be more trouble from what one expert on media business christens the “trifecta of terror”: ad blocking, ad fraud (aka non-human traffic) and viewability (the struggle to keep content displaying right on evolving hardware and software.

If you follow extreme sports anywhere in the world, you’re likely to follow the coverage mounted by the energy drink Red Bull.

LinkedIn has been making inept attempts to break into business journalism, but that doesn’t mean they can’t eventually succeed. What’s to stop Uber producing travel reporting?

No sooner have an editor and CEO woken up to the fact that more of their output is looked at on mobile devices than any other way than they realise that they have to work out if artificial intelligence and virtual reality can help news.

Newsrooms have to be both bold (open-minded, experimental, risk-taking) and conservative (sticking firmly to what they do distinctively and well) at the same time.

Adaptability has limits. But this kind of flexibility needs to include a journalistic purpose: sometimes telling people what they may not want to know but need to learn.

The pace of change is not slackening at all. Editors and publishers need to take time from the daily emergencies to attend to this checklist:

Rigorous, relentless focus on only activities which produce distinctive value.

Why has the Boston Globe started online “verticals” on the Catholic church and the Boston Red Sox? Because they have the expertise to dominate those areas.

No one knows which combination of possible business models will work for which newspaper in which market.

So, experiments – carefully controlled for quality – are essential. The openness and agility to gather intelligence about now opportunities, to learn from experiments and to back out of the ones that don’t work are all vital.

The routes and means by which people learn about the world will go on changing for some years yet.

The collection and analysis of data about who reads what and when is critical to understanding those evolutions, so the people who do it must be the best.

The top data guru at the New York Times has a PhD and part-time university post. The Financial Times just hired an expert away from the UK government’s statistical office.

The one prediction about 2016 which can be made with complete certainty is that the rate of change will not slacken. Quite the opposite.

This story was first published in The Media Yearbook, an annual title of Wag the Dog Publishers.

George Brock is a journalist, consultant, author and Professor of Journalism at City University London.