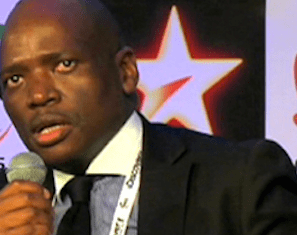 SABC chief operating officer Hlaudi Motsoeneng dominated the press briefing on Tuesday afternoon during which the state (oops, sorry, PUBLIC) broadcaster addressed the state of its operations and reacted to censorship claims, the profitability (or not) of the SABC, staff unrest and Jimi Matthews’ resignation.

Here are 11 ‘Hlaudi-isms’ to emerge from yesterday’s gathering.

1. When one or two person cough, it doesn’t mean that all of us we have got flu. So we don’t, there is no flu here at the SABC.

3. It’s up to individual. If someone decide to resign, I mean, that is his own business. So, the SABC will carry on. There are people within the organisation who are doing the work.

4. We as SABC, I’m happy that people are feeling the heat. And they will feel the heat, because we have touched the real nerve within the organisation. We have touched the real nerve externally so. And why I’m saying this, is because transformation is not negotiable from SABC. It’s only right, no left, that is transformation. That is how we are going to run this organisation.

5. The SABC in different provinces, they will ask 20 computers, computers. And computers, you as journalists you know those are the tools that you do your job daily. Auckland Park they will send five computers. Because they are still trying to get computers here in Gauteng. I don’t know, hey, but they are still trying to find computers. But computers are everywhere, in provinces. And immediately when you give, you allocate five computers and you have 15 people, what is happening? Which means people are sitting there without tools to perform and do their duty.

6. Some people are coughing, it’s a good sign. But they can’t infect others with flu. Because people of the SABC are very happy … You know I talk about left and right. What I hear in that rediffusion, all of them they said ‘no, Mr Motsoeneng the line is right. Where’s the revolt? There’s no revolt in the organisation. SABCs not five or 10 people, because you as media I don’t know whether you have your own agenda about the SABC. Because I don’t even know how you can say there is a revolt when SABC employees are excited, SABC employees are working. How can these people who are coughing and then you say the SABC is coughing, the whole SABC. Who is coughing here? SABC people are not coughing.

7. When we employ, we don’t ask you whether you are EFF, whether you are DA, whether you are ANC or Freedom Front. We employ employees of the SABC, we don’t ask you that because we can’t do that. Even if you belong somewhere where you belong, but you can’t belong there in this organisation. You adhere to the policy of the SABC, you adhere to the instruction of the SABC. If you can’t do that, it’s a pity. There are two ways, you move before we come to you. We’re not apologetic about it. We are going to deal with people decisively on discipline matters within the organisation.

9. Every time everything happens at the SABC it’s Hlaudi. Is Hlaudi running this organisation or do you have a team running the organisation? … We were sitting together on Friday dealing with issues within the organisation. Happy, always we are happy here at the SABC. But you ask yourself, what happened on weekend? Who said what to who? Because we are aware that there is an agenda to destabilise this organisation. And we are not going to allow that, that is not going to happen. We are aware that people have interest business in the organisation and we have touched that nerve because we are saying the chocolate cake, let’s share it. Share with others. Some people are not happy. We are aware that we said 90%, some people are not happy. And we’re not turning back because we are saying South Africans are important than anyone we need to cater for our South Africans people. And we’re doing that, we are not apologetic about it.

10. The answer is, yes we are more than financially sustainable. The reason why we talk about 90% waya waya is because we have money. We can afford to pay, we are sustainable.