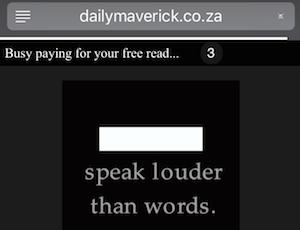 If digital media wants an equal share of available revenue, it’s going to have to be a lot more creative and inventive to accommodate the needs of both audiences and advertisers.

South Africa’s media landscape is a far cry from developed markets where advertising dollars have followed the dramatic shift from analogue to digital channels.

In the U.S., the internet category is expected to surpass television in 2017. In 2015, internet (or digital if you prefer) attracted $59.6bn, not far off cable and broadcast television’s $66.3bn [1]. Jarred Cinman, chairperson of the IABSA, recently wrote a sensible article on how digital advertising channels are under-supported in South Africa which, if you haven’t read, I urge you to. “Digital spend remains out of sync with the penetration of digital access in the market,” he laments.

I completely agree with him, although not for the same reasons. One of his assertions is that agencies and advertisers have an attachment to traditional media, and to television commercials in particular. As evidence, he posits, “Why else do you hear advertisers calling TV adverts 30-second ‘films’?” That would be because it’s the medium they were captured on for a century before digital filmography emerged. It became even more prevalent as a means of distinguishing between celluloid and digital formats during the period when the two competed.

Some of the most successful and famous commercial directors and photographers today still prefer to use celluloid for its ability to capture nuances that digital can’t yet deliver. Film has been a synonym for commercials for decades for this reason, not because of some attachment to making television ads. Besides, making commercials for the internet involves the same effort as making ones for television.

I also challenge his assertion that an ad agency creative director’s biggest ambition is to make an epic TV brand commercial. There was a time when this was unequivocally true, but no longer. Any creative worth his/her salt wants to be recognised for their ability to (a) generate and execute an idea that transcends all media types, and (b) that wins both creative and effectiveness awards. In adland, a creative director who isn’t pushing hard for those solutions is committing career suicide.

These allegations are a false narrative digital agencies occasionally resort to when competing for budget. It’s unnecessary and divisive and only serves to undermine the industry’s standing. There isn’t a traditional agency not practising digital communications today in the same way there isn’t a digital agency not trying to swim upstream into traditional media. Digital agencies have stopped using that very label, now referring to themselves as “agencies born of the digital age” or some variation thereof. Point is, everything is converging, and soon enough we’ll be able to dispense with digital and traditional descriptors in the same way we did ATL and BTL.

Digital ad revenue has not kept pace with its penetration

Paging through a newspaper exposes readers to far more advertising than does selective link clicking. The web browser has expedited content consumption and placed significant limits on how much inventory a publisher can sell. It also severely limited the price they could command for it at a time when readership was divided between the dual formats of analogue and digital. Consider that mobile accounts for over 60% of all South African internet traffic and the picture is even more constrained. Selling real estate on a small screen is extremely challenging.

Now consider the fundamental change in user experience from the printed page to a mobile phone. In print format, advertising is passive. It’s just there, visible but not invasive. Category interest and standout creative determine whether or not it gets attention, but in digital media it’s mostly invasive. Anything that covers more than 10% of a small screen is considered irritating, but what impact can you make on one tenth of a mobile phone screen? Newer technology is improving that experience, but the greatest irony is that technology has succeeded in simultaneously expanding reach while dramatically limiting publishers’ ability to monetise their content across digital platforms.

Meanwhile in audio-visual formats, other issues prevail. YouTube struggled for ages with manipulated views, where click farms artificially inflated view counts, effectively defrauding advertisers. Once YouTube found a way to manage it they introduced pre-roll, forcing viewers to watch at least five seconds of an advert before allowing the option to click past it. Very few actually do. YouTube’s criterion for measuring a view is “about” 30 seconds. While this sounds reasonable, Facebook (which introduced video autoplay as a default setting in News Feed) counts a view at three seconds, and Snapchat measures a view the moment it begins playing. These inconsistent metrics don’t instil confidence in advertisers.

This gatekeeping approach to content is unpopular with viewers for obvious reasons. With linear television there’s never been the option to skip ads, but with digital media, social platforms in particular have deliberately built huge user bases on the back of ad-free environments, only to later activate advertising. Once users are accustomed to an ad free environment they balk at the sudden interruption of their normative experience. While users do become accustomed to advertising on once ad-free platforms, they aren’t pleased and it affects the stickiness and attachment to the platform. In South Africa this situation is exacerbated by the stubbornly high cost of mobile data. The vast majority of users (being pre-paid) are incredibly aware of their data consumption, and they shun environments that force-feed them data rich advertising content they don’t want to see, let alone pay for.

Which may go some way to explaining why digital channels only garnered R1.5bn of the total R36.7bn advertising spend in 2014 – a mere 4%. More than half of that went to search (read Google) while mobile display attracted less than 10%, yet mobile delivers 60% of the traffic. Herein lies a significant problem – massively reduced inventory and a poor user experience. The only local publisher I’ve noted to be inventive in mobile is the Daily Maverick [2], which developed a clever advertising delivery method: a five second pop-up screen with the message “busy paying for your free read”. I’m sure it’s helped their revenue streams, but it remains a travesty that such a leading, high quality publication can’t attract a fraction of the revenue that say the Independent Media’s titles do, despite delivering upwards of a million unique users.

Developed markets have demonstrated that the growth of digital advertising doesn’t fully offset the contraction in traditional media. When advertisers shift budgets to digital, they expect to save on their overall ad spend. Digital media has a deflationary effect on the whole market and can hurt the pricing power of traditional media. Most importantly, if digital media wants an equal share of available revenue, it’s going to have to be a lot more creative and inventive to accommodate the needs of both audiences and advertisers. Traditional media developed and enhanced their inventiveness over decades; digital media can’t merely rely on passing traffic for any more than top up shopping. They’ll have to earn their trolley shop with more effort and inventiveness.

[2] Disclosure: The author is a contributor to the Daily Maverick, but receives no remuneration and holds no commercial interests in the publication of any nature whatsoever.