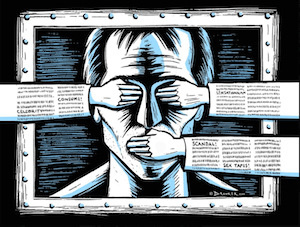 OPINION: South Africa voted with China and Russia against a UN resolution on freedom of the internet. It is ironic that censorship is flourishing in the information age.

Two beliefs exist about modern journalism. One is that the digital revolution is the most powerful force disrupting the news media. The second is that the internet and the social media platforms it spawned, such as Facebook, Twitter, and Snapchat, are shifting power from high authorities to civil society and to bloggers, or rather, “citizen journalists.”

While it is almost impossible to disagree with these two beliefs, I can’t help but notice that they obscure evidence that high authorities, or governments, are having as much success as the digital revolution in throwing the media into disarray and asserting the information that reaches society. Their actions have taken centre stage in defining how information is produced and consumed, and by whom.

Take this curious fact for instance: Censorship seems to be flourishing in the information age. However, in theory, the constant digital revolution makes it almost impossible for government to control the flow of information. Some have even gone as far as to argue that the inception of the internet marked the death of censorship, particularly, John Gilmore – an internet pioneer – who told TIME magazine in 1993, “The Net interprets censorship as damage and routes around it.”

So, where exactly did they get it wrong? By being blindsided by governments, who went from being spectators of the meteoric rise of the internet to sophisticated early adopters of advanced technologies that allowed them to not only monitor journalists, but also direct the flow of information.

Today, many governments are routing around the liberating effects of the internet. Much like entrepreneurs, they are relying on innovation and imitation. Countries such as Kenya, Hungary and Turkey have imitated autocracies like Russia, Iran and China by redacting critical news and building state media brands to have better control of the news that reach society. Furthermore, they are also creating subtler tools to complement the blunt instruments of attacking journalists.

How is this happening?

We’ve underestimated the transformative effects of the internet – which has seemingly boosted its ability of redrafting any equation of power in which information is a variable, starting in newsrooms. But this, it turns out, is not a universal law.

While it’s alarming to find brazen cases of censorship in plain sight, it is even more surprising how much of it is hidden. Its scope seems hard to appreciate for several reasons.

First, some tools for controlling the media are masquerading as market disruptions. Second, in many places internet usage and censorship are rapidly expanding at the same time. Third, while the internet is viewed as a global phenomenon, censorship can seem a parochial or national issue—in other words, isolated.

Reinventing censorship in the 21st century

Traditional censorship was simply an exercise of cut and paste. Government officials would often scrutinise the content of newspapers, magazines, books, movies, or news broadcasts, often prior to release, then chop and change the information according to what they deem was ‘acceptable’ enough to reach the public.

When newsrooms started joining the digital revolution in the 1990s, filtering, blocking, and hacking replaced scissors and black ink. But tech-savvy activists quickly found ways to escape digital censors. For a while it looked like agile and decentralised networks of activists, journalists, and critics had the upper hand against centralised, hierarchical, and unwieldy government bureaucracies. Then governments caught up.

Take China for instance. The country with one of the most Internet users and the fastest-growing connected population is also the world’s most ambitious censor. The government maintains the ‘Great Firewall’ to block unacceptable content, including foreign news sites. Approximately more than two million censors police the Internet and the activities of users. Yet a 2014 BBC poll found that 76 percent of Chinese reported feeling free from government surveillance. This was the highest rate of the 17 countries surveyed.

China is unapologetic about cracking down on critical media coverage, but authorities also censor in ways that are subtle and hard for the public to see. In Hong Kong, where it is obligated by treaty to respect a free press, Beijing uses an array of measures to limit independent journalism, including violence against editors and the arrest of reporters. But it has also quietly engineered cyber-attacks, the firing of critical reporters and columnists, and the withdrawal of advertising by private companies, including multinationals. The Hong Kong Journalists Association described 2014 as “the darkest [year] for press freedom in several decades”.

Redistribution of power through the internet

The internet can redistribute power. But one can hardly assume that there is a simple technological fix for the determination of governments and national leaders to concentrate power and do whatever it takes to keep it. From Russia to Turkey, Hungary to Bolivia, leaders are packing the judiciary with loyalists and staging elections that reward allies. In such a political environment, independent media cannot survive for long.

Censorship will rise and fall as technological innovation and the hunger for freedom clash with governments bent on controlling their citizens – starting with what they read, watch, and hear.