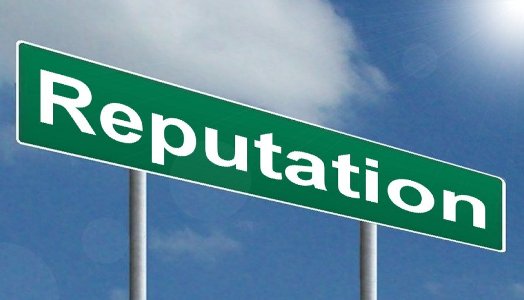 CYBERTORIAL* “It takes many good deeds to build a good reputation, and only one bad one to lose it.”—Benjamin Franklin

The Top Companies Reputation Index (TCRI) is by sample size and the number of companies included the largest corporate reputation study conducted annually in South Africa since 2010. The Awards evening scheduled for 15 September 2016 in Sandton will see the most reputable companies in various industries receive acknowledgement for their outstanding reputations. The full findings will be published in a special Mail and Guardian supplement on 16 September 2016.

Underlying this Mail and Guardian and Plus 94 Research initiative is the fact that all businesses should recognise that managing corporate reputation is fundamentally about managing perceptions. Such perceptions may be, and often are, variable from one stakeholder group to the next with different implications for the impact on overall performance and profitability of the business.

There is a common misconception that media coverage constitutes a company’s reputation, or that the company could manage its reputation by increasing stakeholder engagement platforms and opportunities. Realistically, what media coverage does is to manage existing expectations rather than create new ones, and attempt to reinforce certain types of views. Similarly, additional engagement platforms such as social media and events are used with the aim of cementing the foundation for a positive reputation.

But not all positively slanted exposure is reputation enhancing, nor is all negative publicity bound to end up in a reputation crisis.

Robert G. Eccles, Scott C. Newquist and Roland Schatz, writing for the Havard Business Review, declared that companies with strong positive reputations attracted better people. They are perceived as providing more value, and can afford to get away with charging a premium. There are other benefits to having a good business reputation that include customers’ loyalty and propensity to spend more on a wider range of the company’s offerings. Because the market believes reputable companies deliver sustained earnings and future growth, they have higher price-earnings multiples and market values and lower costs of capital. As such, corporate reputation is of immense importance for management, shareholders and the public at large.

South Africa is an emerging economy that is underpinned by an economically diverse society. It is faced with staggering levels of unemployment and inequality. Reputable companies do tend to trade in ways that enable business to make profits while adding positively to the society it serves. Consumers are hyper-sensitive about a company’s intangible assets such as its reputation, as has been repeatedly confirmed by past TCRI reports.

As Eccles et al. observe, in general most companies do an inadequate job of managing their reputations. There is a bigger shortfall when it comes to managing risks to their reputation. They tend to crisis manage reputation risk by only intervening when disaster has already surfaced. They effectively do a public relations containment exercise than shape corporate reputation. The problem with such an approach is that some reputation damage is so significant that it cannot be corrected by a public relations campaign, no matter how expensive or well executed. Measuring the business’s reputation and estimating risks to that reputation is not optional, given the impact that a decline in reputation would have on all aspects of business performance and corporate well being.

Some companies in South Africa are under the erroneous impression that if they abide by the Companies Act and follow governance guidelines provided by, for example, the King reports, then their reputation will take care of itself and risk to that reputation will be eliminated.

Nothing could be further from the truth. Corporate governance is only one of nine dimensions that constitute the entire reputation pie. Corporate reputation, if measured partially, will result only in half-baked solutions. It takes a holistic measure of reputation to be in a position where a company’s reputation can be managed with a measure of control. The Top Companies Reputation Index (TCRI) is based on nine pillars (graphically illustrated below) which include important aspects such as Vision and Leadership, Products and Services, Corporate Communication, Financial Performance, BEE, Governance and Corporate Social Responsibility. 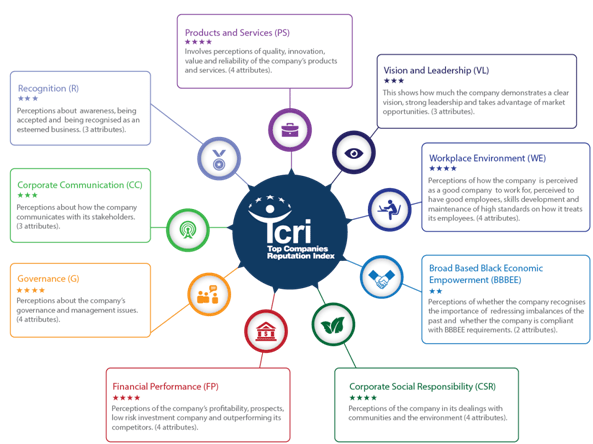 The majority of businesses in South Africa do not have a dedicated department to manage this most important but intangible asset. Corporate affairs departments, while they have access to multiple stakeholders, are not directly empowered to manage corporate reputation in terms of having internal controls and sufficient budgets to communicate externally. Their function is largely circumscribed by outward directed communication, corporate social responsibility and to a lesser extent aspects of brand recognition.

In most companies, only the board and CEO and their designated person or team can effectively influence all nine pillars of reputation. The TCRI assists businesses in recognising gaps that need to be filled in managing their reputation.

All companies, by the manner of their commercial and social interests, create certain expectations. Their reputation will be affected by how consistent business performance is with beliefs about what it is expected to be doing. Some companies are more adept than others at embracing change and responding to commercial and social dynamics better than their peers. TCRI is an effective way of getting to the bottom of how changes in reputation over time occur and how they can be mitigated.

Finally, all organisations depend for their success on the internal climate, working conditions and company culture. Such attributes have an influence on products and services, innovation and market leadership. TCRI combines all external and internal expectations, assesses their performance and prescribes courses of action needed to enhance reputation. In South Africa, as elsewhere in the world, the most successful businesses have the best reputations.

A number of experts will help unpack the latest trends in the reputation measurement and management practices at the Awards Evening on 15 September.