A surprise visitor for media agencies (With vids and pics) 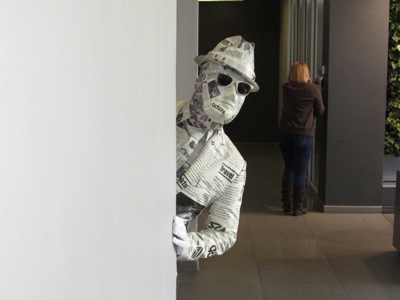 Media agencies across the country were surprised recently by a strange figure wandering through their hallways and offices. Dressed in a newspaper suit, sunglasses and a hat (also made out of newspaper), employees flocked from their desks to get a closer look at who this individual was.

It turned out to be Adsman, the mascot for Ads24 who was created by the team at creative agency Sunshinegun. Michael Bratt walked with him through the GroupM building in Sunninghill to find out why he was there.

He arrived without much fanfare, but soon had people talking. Met with looks of surprise, confusion, amusement, apprehension and in some cases reluctance, Adsman soon made himself at home. Whether it was taking selfies with people, handing out boxes of chocolates or simply just hanging around, Adsman certainly grabbed everyone’s attention.

We tried to find out from Adsman why he was visiting agencies, but we weren’t very good at interpreting his mime action (since he doesn’t speak as he doesn’t have a mouth).

Luckily for us Ads24 was on hand to answer this question. Adsman’s visits to agencies, including MediaShop, OMD, and GroupM in Johannesburg; Aegis, Carat, Vizeum, and PHD in Cape Town; and Initiative Media and OMD in Durban, was an activation to support the launch of the next edition of The Beat – News Edition, Ads24’s trade newspaper.

The latest offering focuses on News Overall, featuring articles by industry experts such as Ross Sergeant and Gordon Muller. Readers are also given the chance to get to know Adsman better and literally watch him move between print and digital platforms.

In a statement Ads24 says, “The absorbing, dynamic and reputable nature of the press is the reason our readers put their faith in newspapers and their growing online platforms. Our Adsman is the personification of that faith. He lives inside the home of every reader. He is a friend, a companion, a confidant and an influence. Whether it’s digital or print, our news reaches the heart of every community.”

George Rautenbach, creative director of Ideas at Sunshinegun, explains more about the inspiration behind Adsman, “I saw a street performance artist in Cannes many years ago … His skin was gold, his suit was gold. He was just this incredibly mesmerising thing; you couldn’t take your eyes off the guy… Adsman commands your attention. He’s not necessarily a funny or happy or sad guy.”

He adds that more recently, Top Gear’s The Stig has also influenced the direction of the Adsman character, describing him as being somebody and nobody at the same time.

Rautenbach also explained more about the brief that Sunshinegun was given by Ads24 that lead to the creation of Adsman, “The new payoff line for Ads24 is Reach. Beyond Numbers, because I think for the longest time we have been talking about just the numbers to the audience, to the trade, to media buyers and planners, it’s just numbers numbers numbers. It stripped the humanity out of it … Something like Adsman does reach beyond the numbers, don’t forget to talk about the brands positioning of touching the hearts and minds of the community … This brand ambassador does excite you and educates at the same time.”

Adsman has been in existence for a year now, but his buildup has been slow. Rautenbach affirms that they are really planning to ramp up his presence in the next year, starting with these appearances at media agencies.

“Really great work still requires human intervention and creative thinking and an awareness of what audiences want. And I think we are bringing the humanity back to the industry. We’re speaking through this guy who has no race, creed or colour; who is universally accepted by our reading community as well as by our customers,” he comments.

Rautenbach also confirmed that Adsman’s future path will mimic that of Ads24, which is moving away from only a focus on print. Integrating more digital elements into both Ads24 and Admans will be targeted. This has already begun with the inclusion of a cinematic gif in The Beat – News Edition.

Rautenbach concludes, “Adsman really does behave like a mascot. And I suppose a mascot is something that reaches beyond traditional media channels. He can get to places where it’s sometimes difficult for us to reach … He’s the news walking, not talking, but walking. News is probably still the most credible and reliable medium for advertisers to advertise around.”