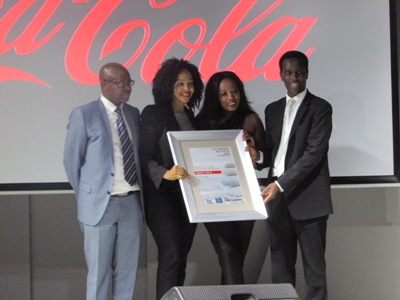 CYBERTORIAL* At a glitzy awards evening at The Venue at Melrose Arch, the companies with the best reputations in South Africa were honoured. Experts in reputation management were also on hand to provide some sound advice to attendees. Michael Bratt went along to find out more.

For the second year in a row Coca-Cola was named as the company with the best overall reputation in South Africa. It fended off competition from car manufacturers Toyota and Volkswagen who rounded off the top three. Winners in different categories were also announced.

Sifiso Falala, CEO of Plus94 Research, the company that conducts the survey in partnership with Mail & Guardian, was the first to address the gathering, discussing the research methodology; 181 companies were rated in this year’s survey, more than in previous years.

They comprise the top 50 advertising spenders in South Africa, as well as their main competitors. The 2 780 survey respondents came from all nine provinces, in urban areas, and the research was conducted face-to-face in their homes. Plus94 has been using this research model for the past 15 years, improving and adapting it to market changes over time. It is made up of multiple elements including how trustworthy a brand is, the quality of products/services offered, vision and leadership, governance, corporate social responsibility, and black economic empowerment.

Falala also explained why reputation is so important. “We’ve tended to dwell on the quick fixes of brand and the quick fixes of advertising and the quick fixes of what can my CEO or boss see on television tomorrow night as opposed to what will this business look like 20 years from now, which is the reputation we need to be concentrating on”. He added that a good reputation can help your brand attract and retain the best employees, charge a price premium, gain the trust of your shareholders, recover quickly in times of crisis.

The next speaker was Janine Hills, founder and CEO of Vuma Reputation Management, who offered some reputation management advice to attendees. “Brands in South Africa tend to talk themselves down. As a brand/nation we need to stop talking ourselves down. If a brand keeps talking themselves down it will come true.” She also explained that brands tend to wait to look after their reputation after they hit a crisis, “Put plans in place now, don’t wait for the crisis … Prepare for your eventualities to make sure you never get in those situations,” Hills said.

The keynote speaker for the event was Alan Mukoki, CEO of the South African Chamber of Commerce and Industry. He spoke broadly about South Africa’s reputation, starting by saying, “South Africans are our own worst enemy. We talk bad about our country.” He advised that people need to look at the information that is in front of them and tell the true story of what it means, and that it is wrong that the reputations of a specific individual (President Jacob Zuma) and South Africa are being seen as linked.

Mukoki also drew the audience’s attention to the fact that persistent portrayal of the country in negative light damaged the reputation of the country, which then created a more difficult climate for all businesses, including those engaged in this practice. He concluded by telling the story of a neighbour of his when he was a small boy, who used to fight with people and break his own house whenever he got drunk. The message of the story for South Africa was “Every time we act like the drunken neighbour we shouldn’t break our house”.

Commenting on the win, Zipporah Maubane, head of communications for Coca-Cola Southern Africa said, “Consumer and stakeholder feedback is the force behind our reputation. It is crucial for us to keep in touch with our consumers and be relevant in the market through consistent engagement and communications particularly with key stakeholders.”

She added, “Our employees are our number one ambassadors. Encouraging associates through living the company’s values is a great way to start. At Coca-Cola for example we live according to our values and encourage and inspire our employees, or as we refer to them – Associates, to do the same. We have further simplified our values to make them tangible. And they really are the kind of qualities one would expect a leader to have in this current environment. They are Leadership, Collaboration, Integrity, Accountability, Passion, Diversity, and Quality.”

Detailed reports for each company are available, from Plus 94 Research, breaking down their performance in the different reputation elements. This is important as brands will be able to see what areas they improved in and where their performance needs attention. For reports, contact Oscar Tshifure at Oscar@plus94.co.za or info@plus94.co.za.