World of possibility: The race to monetise podcasting 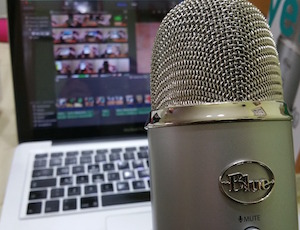 There’s a company in the U.S. called Panoply. You’d probably call them a broadcaster although, technically, narrowcaster might be a more accurate term. Either way, this company may just be what the future of radio looks like.

Panoply make podcasts, short pre-produced pieces of radio distributed digitally. Anyone who listens to traditional analogue radio in South Africa will be familiar with the term, as most radio stations advertise their own podcasts on air, normally housing them on their websites. However, these podcasts are normally just repurposing of on air content, a bit like DStv Catch-Up.

The difference with Panoply and other dedicated podcast companies is that they produce podcasts which are designed to stand alone. They are complete programmes in themselves with a pre-determined duration, usually in series form and which conform to a different set of audio rules than traditional live radio programming. Strong imaging, production effects and a storyline with a definite beginning, middle and end mark podcasts out from the kind of live, flowing (some would say directionless) radio that we are used to.

This difference is key because it suggests a different strategic approach to the future of podcasting between South Africa’s established broadcasting groups and the independent podcast producers who are beginning to pop up on the audio content landscape. Without wishing to oversimplify, the difference is that the independent producers see podcasts as a revenue generator in themselves whereas the established broadcasters see podcasts as a way to sell traditional airtime on their traditional stations.

Let me give you an example: A major South African radio station recently sold the sponsorship of a podcast series to a major office equipment company. This is a weekly podcast series where the radio station’s journalists interview successful business people about their business journeys. The series is housed on the client’s website.

On the surface this is a clever deal all round. But look a little closer and you’ll realise that it’s more of a clever move for the broadcaster than it is for the advertiser. That’s because the way the broadcaster builds audience for the podcast series is through running commercials on it’s terrestrial radio stations. And, as anyone in the media world will tell you, traditional radio advertising is not cheap. Not only that but the broad nature of a traditional station’s audience means that there will be significant wastage with these commercials. In short, most people who hear the spots won’t be interested in the podcast content being advertised.

Broadcasting is under pressure. The digital revolution is finally catching up with both radio and television. I suspect many people are watching more video content today than ever before but they’re not watching it on TV. They’re downloading it. Radio isn’t at that point yet but it’s coming. It’s as simple as consumers realising that they can choose exactly what content to watch/ listen to and when. And once consumers have tasted free choice they are never going to go back to having a programming manager making those choices for them.

And because traditional broadcasting is under pressure the radio stations have to come up with ever more ingenious ways to shift their expensive advertising slots.

That is the gap the traditional broadcasters have spotted with podcasts.

You could argue that they deserve congratulations for embracing digital technology in a way that their print cousins never did in the early part of the century and for which they have since paid such a heavy price.

But have the radio stations really embraced podcasting… or have they embraced the fact that it might help them sell more spots?

The harsh truth is that podcasting is incompatible with the current financial model of most radio stations. Podcasts are relatively inexpensive to create. Live terrestrial radio is also relatively cheap to create but most South African stations would have you believe that it’s not. The reality is that these stations have built empires for the simple reason that they have operated in a highly regulated market where they have had a free run. As a result they have been able to drive their advertising rates to exorbitant levels so that they can continue to feed those empires.

Here’s the crux: if you’re going to do podcasting you obviously need to build an audience for those podcasts. Advertising on a traditional radio station is an insanely expensive way to do this. There are much more cost effective ways to build audience via digital channels with a very high degree of accurate segmentation and minimal wastage.

The counterintuitive irony is that traditional radio stations are the companies who are actually the least likely to succeed at the podcasting game. They’ve got the ability to produce excellent content but if they are going to do podcasting properly they will end up cannibalising their own businesses.

Independent podcast producers are the guys who are going to financially crack podcasting first. Companies like Panoply. Their business model is pragmatic. They are investing in top quality content, production and research in the hope of producing the next podcasting blockbuster, the podcasting version of Game Of Thrones (there have been a couple of these already, think Serial and The Message but nowhere near as prolific as in the world of video.)

Panoply are currently experimenting with a weekly podcast series called Revisionist History hosted by Malcolm Gladwell. So how does Panoply fund the search for the ‘next big one?’ They do it through creating customised podcast platforms and content for advertisers. Usually special interest niche content, not advertorial, which the brand knows that their consumers are interested in.

As brands understand that they can now own their own content a whole new world of possibility has opened up. The ability to build and own their own audience and not have to pay the owner of another medium for the right to talk to your own customers. It’s like buying your first car and no longer having to get the bus to work.

So what will the future successful radio broadcaster look like? I think it will be a company who manages hundreds of digital audio platforms, delivering niche audio content on behalf of clients and who, critically, know how to build audience cheaply for those platforms.

But this future company will also produce lots of top quality content offerings to large numbers of listeners and in which they sell advertising. Mostly packaged, sometimes live, but always on demand.