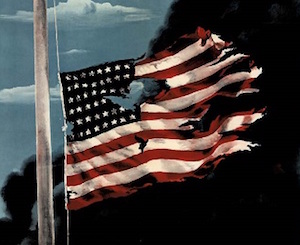 America needs a good PR. Specifically someone who is adept at crisis coms and in particular reputational risk management (RRM).

Something bad has infected the brand.

Perhaps a bug from a sweltering banana republic brought back by a shady character from a failed CIA operation.

What’s happening in the Trump vs Clinton debacle is not worthy of a country to which we all used to look, alongside England perhaps, as the ‘go to’ example of good democratic governance.

This is a bit rich, I know, coming from where I do: South Africa.

We have experienced the full A to Z list of reputational issues all the way from apartheid to Jacob Zuma, with extended stays at corruption, patronage and scandal.

Then, for a short while we had Mandela, an icon of all that is good in a human being and an inspiration for good governance.

Now we are back in action with president who, with his blatantly corrupt cronies, is doing all he can to plunder the treasury, align with the perpetrators of genocide and strip us of any smidgen of dignity we have left.

But this is Africa.

We are not America.

We are third world, we are emerging, we have not yet emerged.

America suddenly sunk from the measured dignity of the Washington Post to the gutter sniping of the tabloids. ‘Red tops’, fuelled by shock and sensation, with headlines shredding dignity screaming racism, misogyny, sexism, threats, airing allegations of impending voter fraud

Business leaders talk of highs and troughs. They have graphs and PowerPoint presentations, theories and ‘phenomena’, and waves to explain why what goes up must come down.

In terms of down we had apartheid; America had President Nixon (Vietnam/Watergate) and George W Bush (with the UK’s Blair) who took the country to a war in the Middle East.

Then we reached a high when we elected Mandela and a little later America followed suit, went high and elected Barak ‘Yes we can’ Obama as president.

And he did, supported of course by Michelle, one of the most gracious and most inspirational women, as far as I can tell, to have ever set a high-heeled foot in the Whitehouse.

Not only was Obama the first black president of a world power but also was and is a man of principle, dignity and grace: a leader to look up to.

America suddenly sunk from the measured dignity of the Washington Post to the gutter sniping of the tabloids. ‘Red tops’, fuelled by shock and sensation, with headlines shredding dignity screaming racism, misogyny, sexism, threats, airing allegations of impending voter fraud, and debates about genitalia on the campaign trail.

What are we in, as Americans are wont to say in “the rest of the world” to think.?

As celebrated poet, Allen Ginsberg wrote in his poem ‘America’,

“ America this is quite serious.

America this is the impression I get from looking in the television set.

America is this correct?

Tinged, battered and bruised brands can take forever to recover.

Hence my call for a crisis comms specialist, a reputation risk professional, to minimise the damage, to bring it all under control, to staunch the bleeding.

Odds are that the recovery to reposition the US as a country with a process of governance to which to which we can aspire, could take less time if Hillary is elected, and more than the time the world has left if Trump triumphs.

No one really knows.

What we do know is that whichever of the two is elected, America is no longer the America of George Washington, John Adams, Abraham, Lincoln and Barack Obama – at least not now or for that matter for the near future either.