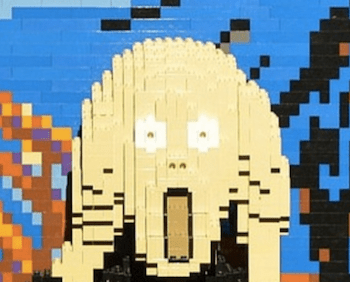 Perhaps providing a welcome diversion to all the apocalyptic press reaction following the election of Donald Trump is the news that Lego, the Danish manufacturer of plastic bricks, has announced its intention to cease advertising in the Daily Mail.

Responding to tweets from social media campaign group, Stop Funding Hate (SFH), and a letter from a concerned parent on Facebook, Lego tweeted on Saturday: “We have finished the agreement with the Daily Mail and are not planning any future promotional activity with the newspaper.”

As veteran journalism blogger Liz Gerard writes, Lego’s actions may well be a game changer because in the midst of the overwhelmingly positive reaction to Lego’s decision there’s the possibility that other companies might follow suit and act upon Stop Funding Hate’s plea that they stop advertising in the Mail, Sun and Express over coverage of refugees and others that are deemed to be hateful and divisive.

The Co–op has been considering its position for some time. Its chief executive Richard Pennycook said in October that that the group is “looking at our advertising for next year to see whether we can align it more closely with our natural sources of support rather than more generic media advertising”.

And, as I write, John Lewis – a company which annually tries to make us believe Christmas exists solely as a vehicle for their latest campaign – is being heavily “brandjammed” by SFH and its army of social media followers. When the retailer recently released its Buster the Boxer ad, it quickly responded with a glossy pastiche video of its own which contained footage of previous John Lewis, Waitrose, Sainsbury’s and M&S Christmas campaigns juxtaposed with the front pages of The Sun, Express and Mail.

The message is: The millions of pounds we spend at these stores is used to fund advertising in newspapers which peddle fear, hostility and hatred. To date the parody has had 6.1 million Facebook views.

At the moment, though, John Lewis is currently resisting the growing pressure. It recently issued a statement claiming it “fully appreciates the strength of feeling on this issue but we never make an editorial judgement on a particular newspaper”. But there is no doubt that these negative associations will worry them, M&S and others a great deal. As the Guardian reported, John Lewis makes 20% of its annual sales – and 40% of its profits – over the Christmas period, profiting £8 for every £1 spent on advertising and the sense of its own worth is frankly staggering. As its ad strategists told Campaign, the ad industry’s trade publication:

Failing to engage the nation would have a significant commercial, social and cultural impact on the John Lewis brand.

The fact is, Stop Funding Hate is gaining momentum and something which began as a Facebook page in August now has 176 000 likes and 58 000 Twitter followers.

Perhaps more to the point, it enjoys the support of celebrities such as Lily Allen and Gary Lineker, who seem perpetually locked in their own war against the tabloids.

Its raison d’être is very simple – to take on what it sees as the divisive campaigns of the Sun, Daily Mail and Daily Express by persuading advertisers to pull their support. The campaign’s organiser, Richard Wilson, told the BBC:

It’s going to keep happening until the financial balance changes and if we can get to the point where actually you don’t make money by publishing these headlines, you lose money because advertisers are going to walk away.

Advertisers walking away is of course the major issue for the newspapers targeted by SFH. In a generally growing UK ad market, newspaper print ad revenue has been declining year-on-year and national daily newspapers as a whole suffered an 11% fall in ad spend in 2015 with tabloid titles seeing a 16.2% decline in print advertising.

It could be that the pressure finally tells. Remember that the closure of the News of the World in 2011 can be at least partially attributed to an online campaign and the fact that a host of companies including Virgin Media, Boots, O2 and Asda withdrew in the wake of the phone hacking scandal.

There are broader questions, too. However distasteful one might find – as I do – the continued demonisation of refugees and asylum seekers by certain elements of the press, should any company’s advertising money have any bearing on newspaper content? Because the clear implication of the Lego decision is that they won’t return until something changes. Even if SFH argues that it is not asking advertisers to influence copy, a change in attitude will have to be the outcome if public pressure continued and Lego and any others who left the bandwagon were to confidently return.

On the other hand should we applaud the actions of SFH and its supporters? This is a movement creatively and effectively articulating the disgust felt by many people. It’s evident that left to their own devices and a toothless regulator, The Sun, Mail and Express will simply carry on as usual. What we are seeing now is consumer activism that is based, fundamentally, on a care and concern for fellow human beings. It might just have positive and far reaching results.

The fact is Lego listens to its customers and does have a record of corporate social responsibility. In 2014 it ended a partnership with Shell following lobbying by Greenpeace – and there are undoubtedly many who applaud their actions. Twitter and social media have been alive in the last few days with people spontaneously communicating support and (most crucially for company profits) their latest Lego purchase.

And there’s the rub – while the right-wing press cannot do without advertisers’ money, the likes of Lego can certainly get by without campaigns in the right-wing tabloid press and partnerships with the likes of the Daily Mail. And if sales of the little bricks increase too? Watch others follow as brands seek to limit damage by association.