South Africa’s consumer banking space is no different. Between them, the country’s retail banks spend billions annually on campaigns designed to captivate and delight. In the process, they set consumers’ expectations high – very high.

It is not enough merely to talk the talk, however. Enduring brand ‘value’ is no guarantee of future success. Through a deep dive into the experiences and feelings customers shared about their banks on social media, using human verified sentiment analysis, it became clear that the ability to deliver positive customer experiences consistently was key to gaining traction – and possibly even market share.

The customer is king

Looking at a year’s worth of social media data relating to ABSA, Nedbank, Capitec, Standard Bank and FNB – the banks that dominate South Africa’s consumer banking space. Customers’ comments were analysed for both positive and negative sentiment, with service a particular focus. 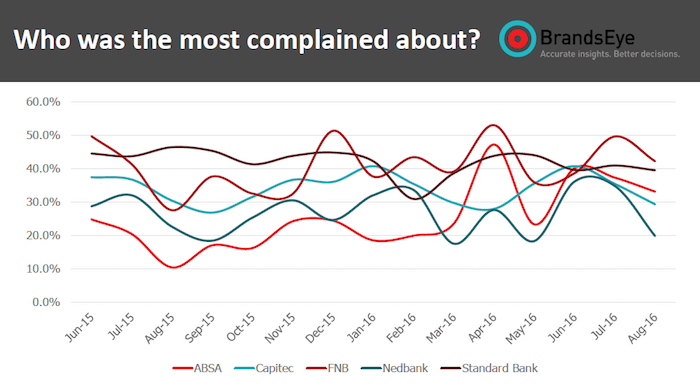 As in all highly competitive markets, South Africa’s retail banking customers expected their bank to meet their expectations consistently. When banks failed to deliver, customers called them out.

The graph above plots negative sentiment – expressions of dissatisfaction by customers who were unhappy with their bank. As is clear, dissatisfaction was highly volatile over the period monitored (June 2015 to August 2016). Though the issues varied – including frustrations around card delays to more serious problems with accounts – no bank emerged as a clear leader.

Data on positive sentiment, on the other hand (coming from customers who praised their banks online), paints a different picture. Looking at the most loved banks below, a single player – Capitec – emerges head and shoulders above its rivals. 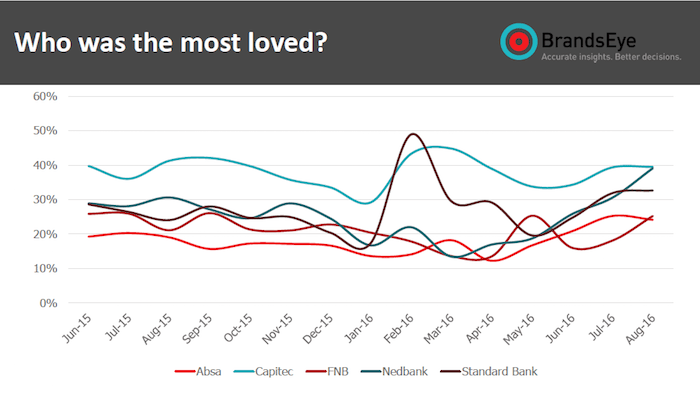 Although positive sentiment surrounding other banks spiked in response to specific campaigns – Standard Bank, for example, saw a positive uptick in February off the back of youth-targeted events rolled out during university registration week, while August was positive for Nedbank’s #talks4success series – Capitec retained a clear, consistent lead.

While not immune to criticism, Capitec was also the bank that fared best in terms of customer service. Referring to the graph below, Standard Bank and FNB, on the other hand, seem to have struggled in this arena, experiencing by far the most negative sentiment – criticism they were not able to counterbalance with great customer service experiences. 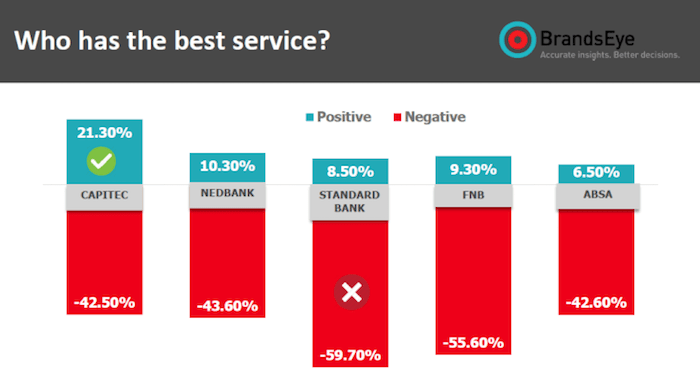 Sentiment as a signal

It is possible to dismiss this kind of sentiment-based data as measuring only moment-in-time satisfaction or annoyance. A deeper insight, however, would be to regard it as a leading indicator – a measure of intent.

In competitive markets, customers can, after all, be expected to act. If they are disappointed and think that another company will offer better service, they will switch. Customers new to the market will be swayed too – a great review from a friend or family member might lead them to choose a product or service from provider A over B. 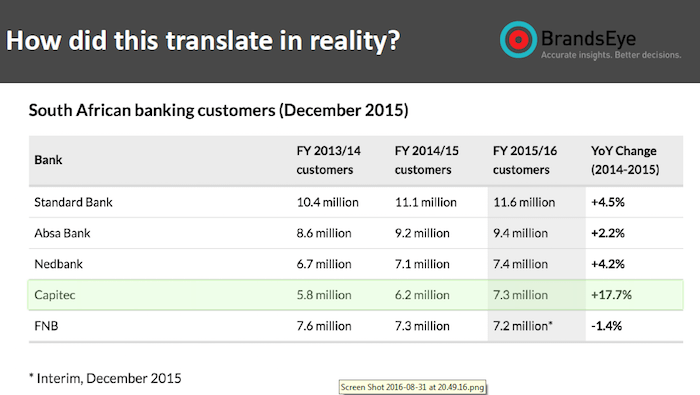 Fascinatingly, data released by the banks shows what appears to be a predictive relationship between social media sentiment and ultimate market share.

Between 2014 and 2015, Capitec, the bank that pleased its customers most over the study period, was also the bank that grew its customer base the fastest – by nearly 18% over a year, a rate that translates into the acquisition of a staggering 100,000 customers per month. Other banks, which were unable to match Capitec’s positive regard as consistently, failed to achieve even 5% growth over the same period.

More interesting still, although FNB scooped the an award for strongest brand in South Africa for the fourth year running in 2015, it was found to be the second-worst performer in terms of social media sentiment around customer service. It was also the only bank of the five that actually saw its customer base shrink.

From sentiment to strategy

Understanding the relationship between consumer sentiment and action is a resource that companies can tap. Compellingly, in aggregate, accurate social media data may even be powerful enough to suggest where market share may be headed – possibly months in advance.

For companies, the conclusion is twofold. Not only can marketing efforts (and spending) be hollowed out by a failure to deliver on expectations, but intangible brand ‘value’ shouldn’t be relied upon to carry an organisation. Rather, what matters is brands’ ability to gain insight into customers’ wants and needs and to ensure they deliver consistently on those expectations.

JP Kloppers is CEO of BrandsEye.