LATEST NEWS
Home Broadcasting Radio Where do you get your news from? The South African radio landscape

Where do you get your news from? The South African radio landscape 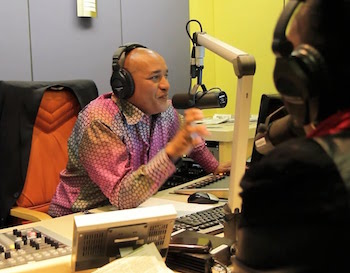 My family and myself were the victim of a dox attack for my last post wherein personal details about myself, my employer, my wife and her business clients were released. Even though this blog really is just my personal thoughts and research that have nothing to do with my wife, we were both woven in as characters in a vast conspiracy theory. So, I thought that for my first 2017 post, I would discuss a slightly more innocuous topic. Enjoy 🙂

[Update: A kind reader pointed out that while Thobela, Lesedi and Motsweding all have bases at the SABC campus in Auckland Park, they are actually broadcast out of Polokwane, Bloemfontein and Mmabatho, respectively. I’ve updated the charts and text accordingly.]

If you’re reading this post, chances are good that you regularly use social media and derive much of your news from these social platforms. However, new technologies and platforms can distract us from the reality that many South Africans still get their news and information from the most readily available technology platform in the country: radio. The top radio stations in the country regularly draw audience sizes in the millions, similar to the audience sizes of our top television shows such as Uzalo, Generations the Legacy, Skeem Saam and Muvhango (according to the November 2016 numbers on TVSA) and the average South African radio listener tunes in for over four hours of radio a day apparently.

I hadn’t really given much thought to the power of radio in South Africa until recently when I attended a conference on the role that various media platforms can play in fanning conflicts or strengthening democracies around the world. I learnt about the pivotal role that ‘vernacular radio’ has played in various political and social upheavals (for example in the Rwandan genocide and the 2007-2008 Kenyan elections crisis), strengthening economies, promoting social and health issues, and empowering rural communities.

‘Vernacular’ in this context simply refers to stations talking to listeners in their own language and reflecting their own culture back to them. Doing so gives such stations an additional emotional resonance that generic (often English-language) stations can’t replicate, making radio a powerful and vastly under-appreciated communication channel. In South Africa, it’s also a communication channel that is dominated by the government-run SABC (South African Broadcasting Corporation) which controls most of the main stations, making it important that the controversy-mired organisation delivers balanced, non-partisan programming. We have reason to believe though that the SABC is not non-partisan as revealed in the ongoing SABC parliamentary inquiry (the Huffington Post summarises some of the revelations that have come out of the inquiry so far here and you can also see my earlier post about “SABC capture” here).

Are you tuning into the voice of the many or a relative sonic backwater?

Similar to how social media enable us to craft our own information filter bubbles, we tune into the radio stations that best align with our existing beliefs and experiences. Given this, how then does your favourite radio station compare in terms of size and influence to the stations that others tune into? Are you tuning into the voice of the many or a relative sonic backwater? This article on BusinessTech.co.za brought to my attention radio listenership numbers that were recently published by the Broadcast Research Council and which allow us to at least partially answer that question. Depending on the demographic that you fall into and where you live, the rankings might surprise you (note that these rankings don’t include digital radio stations such as CliffCentral): 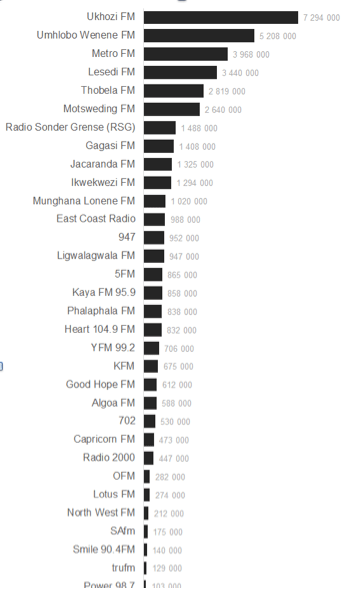 While I am familiar with some of these stations, I definitely don’t know all of them so I decided to look up where each station is based. I was able to derive the city where each station broadcasts from via Tunein.com (if I’ve got some of this info wrong, please feel free to let me know on Facebook). Unsurprisingly, the number of stations broadcasting from each city roughly follows the population sizes of those cities, with Johannesburg having the most stations, followed by Cape Town and Durban: 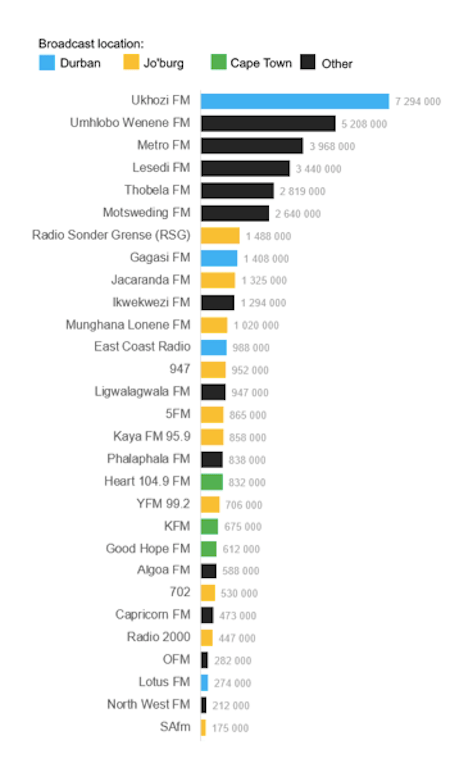 It was interesting to see that despite Johannesburg having the most stations overall, the largest stations don’t broadcast out of that city. Instead, unlike social media, radio does not appear to have a bias towards urban dwellers. Radio is the great communication leveller that cuts across urban and rural. Its ability to reach all South Africans is where it derives much of its power from.

The single largest station in the country, Ukhozi FM, is a Zulu-language station in KwaZulu Natal (KZN). Zulu South Africans represent the largest ethnic group in the country and KZN is the Zulu heartland so this makes sense. The second largest station, Umhlobo Wenene FM, broadcasts out of Port Elizabeth in the Eastern Cape. It’s a Xhosa-language station, representing South Africa’s second largest ethnic group, the amaXhosa. Gauteng is represented by Metro FM, Bloemfontein by Lesedi FM, Polokwane by Thobela FM and Motsweding FM broadcasts out of Mmabatho in the North-West Province. In other words, we have a radio station to cater to each of our country’s major geographical and cultural areas. After these large stations, we see a drop in listenership volumes for the remaining smaller stations which cater to the remaining locales and cultures. Interestingly (at least for me as a Capetonian), the largest stations in Cape Town appear far down in the list making the city a relative lightweight in the radio landscape.

As I stated upfront, radio is still an incredibly strong communication channel in South Africa as it’s the most accessible medium for many people in both urban and rural areas. It’s also a medium mostly controlled by our public broadcaster, the SABC, which carries a heavy responsibility in ensuring that the content on our stations is non-partisan and fair. Right now, we know for a fact that they are not living up to this responsibility in their general conduct, as discussed above. We might get distracted by the likes of Facebook, Twitter and WhatsApp, but we should never forget the importance of the sleeping giant that is radio.