LATEST NEWS
Home Out of Home OOH! It’s for the public good

OOH! It’s for the public good

Posted By: Michael Bratton: February 06, 2017In: Out of Home
Print Email 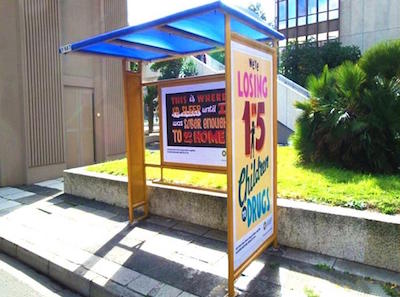 A new type of out of home campaign is sweeping across the medium, ones that don’t focus on pushing a product or service, but that rather inform the general public about societal issues/developments that they may not have been fully aware of. A look at the use of OOH as a public service, why it is such a powerful medium and gives insight into some of the great campaigns.

In the middle of September 2016 cats took over the Clapham Common subway station in South London. Before you call the animal control officer, they were not real cats… rather pictures of friendly felines that had replaced the OOH advertising space normally found in the transit hub.

A commuter may have assumed that this was a clever ploy by a cat food brand, or maybe a new television series featuring loads of cats was on the way. But the reality was far from this. The Citizens Advertising Takeover Service (CATS), supported by Glimpse, a collective of creative minds, created the campaign. Its aim, according to Glimpse founder James Turner, was to get people to look at the world in a different way.

“We want to use the power of creativity for good. Instead of focusing on the problem, we create ‘glimpses’ of a world where things are getting better. Back in February we asked ourselves to imagine a world where friends and experiences were more valuable than stuff you can buy,” he explains. The next step was to put this idea into a message, one that would go viral on the internet. Inevitably cats were chosen, as when one talks about the internet, one of the first things that comes to mind is pictures or videos of cats. It also helped that all the cats in the pictures needed a home, so the outcome of the campaign was twofold. 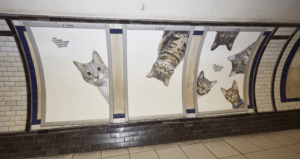 South Africa too has its success stories when it comes to public service OOH campaigns. A recent one supported and promoted the TshWiFi project, where the City of Tshwane began providing free internet access, of up to 500MB daily, to its citizens in more than 780 zones across the metro. As of 16 August, since its inception, more than 1.9 million unique devices had accessed the service, making it the largest free public Wi-Fi network on the African continent.

The problem the City faced was making its citizens aware of this new offering. In stepped Retrolex Integrated Communications with a multimedia promotional campaign that had OOH as a core component. The company’s strategy director Jackie Brits explains why this medium was so important. “It was critical to get people to experience the service first-hand, and then we needed to find a way of making people aware of the various free TshWiFi Internet Zone locations. To this end, rural activations and outdoor signage were key pillars of the campaign.”

The activations allowed for real-time interaction with the end users of the project in their mother tongue, while the billboards and signage made people aware of the TshWiFi brand. “OOH made a technical product human and easy to grasp – our promoters either worked in free TshWiFi Internet Zones or in other areas where a free data experience was created and people using the award-winning app, could use their own devices to locate their closest TshWiFi Internet Zone for free,” Brits adds. “Each activation touch point became a usage and conversion opportunity and because it was so well received, these people then generated valuable word-of-mouth and referrals – so the effects were multiplied.”

This campaign, over a four-month period, increased the TshWiFi unique user base from 1.6 million to two million users. Brits admits that one of the major advantages of the campaign is that the end result sells itself; who wouldn’t want free internet access?

Another public service OOH campaign that is providing internet access to the public is in the Western Cape, the Isabelo smart bench in Stellenbosch, a whole new kind of OOH street furniture. Situated on the corner of Merriman and Bird Streets, where the Bergzicht Market backs onto a popular taxi rank, this bench empowers passersby with free wi-fi and mobile phone charging points. A strategic partner of the City of Stellenbosch provides the wi-fi. This project is further enhanced by the Western Cape’s Internet Champion programme, where community members are equipped to train their neighbours about the benefits of using the wi-fi spots.

Isabelo was first brought to the province earlier this year, when a smart bench was placed in the Cape Town CBD on the corner of Adderley and Wale Streets. Besides providing free wi-fi, it had the added functionality of allowing the City to pose questions to passersby, gaining valuable feedback on topics ranging from informal trade and mobility to hotel accommodation and popular spots to visit in the Mother City. Despite the positive nature of the Isabelo project, the City of Cape Town faced a tougher challenge through its use of OOH in a public service campaign to tackle a major social issue. For the third year it used 93 of Primedia Outdoor’s bus shelters and billboards to tackle the topic of drug addiction. Even though OOH was just one part of a broader multimedia campaign, that also included newspapers, radio and social media, it played a significant role in getting the message out there.

“We know that many addicts find shelter at bus stops, so we wanted to ensure that a helpline was available to them,” said Priya Reddy, spokesperson and media manager for the City of Cape Town.

Peter Lindstrom, Primedia Outdoor’s sales and marketing executive, added his thoughts on bus shelters as an effective medium through which to reach a wide array of demographics. “The format provides an optimal space for pedestrians and commuters to engage with messaging in a different way, as it impacts passersby at eye level,” he explained. The previous campaign reached some 4.8 million people through traditional media channels, and an additional two million through social media. This translated to an 883% increase in the number of calls to the 24-hour helpline.