Posted By: Peter Kohlӧffelon: February 08, 2017In: Out of Home
Print Email Consumer perceptions of activations have shifted; just as the introduction of digital and social media has changed the nature of experiential marketing.

It’s the new golden age of activations. While the days of product sampling and flyer handouts still have a firm place in this area of marketing, the introduction of digital and social media has changed the nature of experiential marketing as we know it.

And not just a little bit, not even by just a long shot, but so drastically that it has shifted the very nature of information flow and assimilation within a campaign.

With the rise of social media and with the advent of digital out of home, the consumer’s perception of activations has shifted. Fortunately, agencies in the out of home space have recognised this and are moving with the times to create brand activations that combine digital technology and brand experiences to effectively connect with consumers.

The new catch phrase is ‘SoLoMo’, which is an acronym for Social, Local and Mobile technology. SoLoMo has been part of the experiential marketing mindset for four years already in the United States, and in South Africa we’re following suit.

Now, more than ever before, brand activations need to fit in with the consumer’s SoLoMo lifestyle. SoLoMo represents a new marketing approach, one that combines all three technologies to create a brand experience that truly resonates with the target market. One that forges an authentic relationship between brand and consumer and translates into brand advocacy, brand loyalty and sales.

Let’s unpack the SoLoMo mindset. For starters, consumers are social; they use social media to share information, connect with other consumers and to source information. What are the implications of online social sharing and connectedness? Consumers get brand and product information from Facebook, from Facebook friends and clickthroughs to brand sites.

Secondly, consumers use their smartphones to interact with brands and more importantly for marketers, they have their mobile devices on them when they are in environments where there is retail, be it in a mall, an airport or at a taxi rank. Thirdly, consumers are local – they get social where they are. They use location-based services; they check in on Facebook and are open to receiving promotional messages via SMS when messages are based on their location. This opens up huge opportunity for local marketing as local relevancy heightens interest.

Within this new marketing landscape, marketers need to constantly research their target audience and engage with them through an integrated strategy. Marketers not only need to carefully consider each step in the route to purchase, they need to ensure that brand activations are strategically aligned to the purchasing process and beyond that, they need to make the consumer experience positively build the brand. SoLoMo and digital have to be integrated into a campaign in order for the latter to happen.

SoLoMo has taken word of mouth to the next level, augmenting a brand experience so that it has greater reach and greater longevity. However, when integrating social media and digital into an activations campaign, there is no one size fits all. Take for example Volvic Water’s Touch of Fruit campaign in Kent in the United Kingdom. The campaign combined retail activation with a gaming aspect to great success. The two-week campaign featured an interactive digital billboard placed in a shopping centre.

Consumers were encouraged to “burst” virtual fruit until they filled a water bottle. As soon as this occurred, brand ambassadors emerged to reward them with the flavour they had won. To engage consumers on a national scale, a Facebook game was also created to accompany the campaign. The campaign resulted in significant ROI for the product because within that particular retail space it successfully cut through the clutter by resonating with the behavior and the mind frame of the audience.

Another example of how the real and the virtual world were integrated to great accomplishment was the Red Bull London Eye campaign. The brand held a concert at the London Eye, recreating various club experiences from the past and present inside each capsule. The event was live-streamed and was watched online. To gain even bigger traction, GigDropper, an app that provides users with the location of underground club scenes, supported the event. The campaign was successful because it used social, local and mobile to augment the experience, which was seamlessly in line with what Red Bull is known for – innovation and risk-taking.

On a much greater scale, what Nike implemented in the United States during the 2014 Soccer World Cup made marketing history. While Adidas was the official sponsor, Nike created a campaign that generated significantly more noise. The Risk Everything campaign ran in the New York City area and incorporated an activation in the form of a soccer tournament. It generated video content, a total of 3 072 369 overall mentions on Twitter (compared to rival brand Adidas’ total of 1 617 537 overall brand mentions during the same time period) and extensive media coverage. 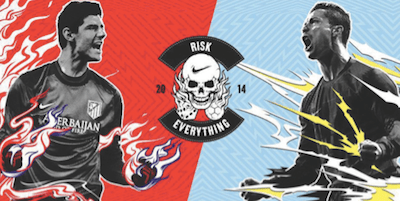 What can we as marketers in South Africa and Africa learn from this?

When it comes to moving with the times we need to be inventive and innovative. However, it takes two to tango and both brand and agency need to be open and willing to take the leap, take a risk and go boldly into the new.