LATEST NEWS
Home Press It’s not the media, ANC, it’s your own moles

It’s not the media, ANC, it’s your own moles 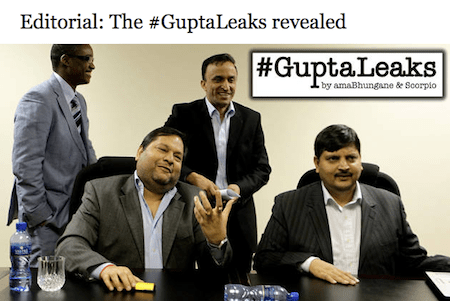 If it weren’t so serious it would be tragically funny every time some cabinet minister or back-bench ANC firebrand rants about the media publishing evidence of corruption, greed, state capture and the myriad of other crises that are tearing the governing party apart.

They seem to be under the impression that the media is somehow able to get hold of highly classified documents, emails and confidential phone messages and then go on some sort of crusade against the ANC aided by foreign agents, if President Jacob Zuma’s explanation to the national executive committee last weekend is to be believed. Which it isn’t, of course.

Admittedly, there are some sections of the media in South Africa that are exceptionally good at digging deep into things. Such as the amaBhungane Centre for Investigative Journalism, which does an outstanding job, and more recently, the Daily Maverick’s newly launched investigative unit, Scorpio. The scoops revealed today by these units, emanating from the #GuptaLeaks whistleblowers, are jaw dropping, to say the least. [Speaking of moles, I imagine there’s a hunt for a mole or two within the Gupta’s companies right about now…]

But, most other news media rely entirely on disenchanted factions within the ANC to supply them with grist to their mills.

I know I am stating the obvious, but there are still many ANC cadres who actually don’t understand how things happen.

I have a feeling that Zuma appreciates just what is going on in his organisation simply from the point of view that it has been ages since he last threatened to sue a newspaper. In fact, most of his cabinet knows that the problem of having their dirty washing laundered in public every day really has nothing to do with a mischievous media but rather to do with some of their mischievous colleagues.

Even more tragic are those naïve denialists in the ANC hierarchy, even in cabinet, who feel that the only way to counter these myriad of sensational charges is to say something, anything, as forcefully as possible. Which is why, every now and then the public of this country is treated to the most illogical, almost maniacal statements. Just watch secretary general Gwede Mantashe’s post-NEC press conference on Monday if you don’t believe me. The man didn’t know where to ‘Mantashe’ next.

Interestingly, all of this seems part of the growing trend of opposition politics moving into governing parties rather than outside of them.

Right now the South African news media is experiencing the most exciting of times, watching the impact of growing dissatisfaction with a leader who holds the lowest approval rating of any president since 1994.

Even more fascinating is watching those news media that were so blatantly pro-Zuma not too long ago actually beginning to change their minds. Except the Gupta’s TV station, ANN7, and their The New Age newspaper which continue to cling to the railings of their sinking Titanic completely, or rather, wilfully, blind to the obvious but relying on ‘alternative facts’ to keep themselves afloat.

I was a working journalist throughout the apartheid era when at times one could not possibly see an end to the tyranny of the Nats and their hold on power through the barrels of their guns.

But, in the late 1980s, miracles started happening. And those miracles were in the form of some people in the hierarchy of the National Party realising that their quest to cling to power was absolutely unsustainable.

From a media point of view, precisely the same is happening right now. Only a few years ago there was a solid wall of loyal cadres surrounding Zuma and an ANC so powerful that it was unimaginable to expect any other party to run the country.

But precisely what happened to the Nats is now happening to the ANC. Too many people in the party’s hierarchy, and at branch level, are realising that plundering state resources and turning a completely blind eye to the poor and unemployed is completely unsustainable, if not downright dangerous.

How I wish I were a lot younger right now and back in the newsroom.