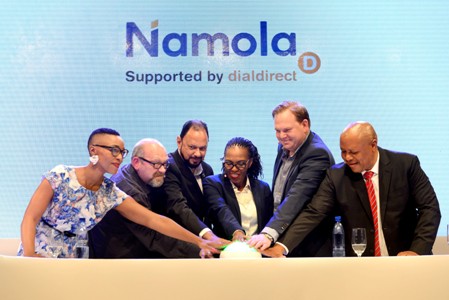 No longer do you have to spell out your name, street address and problem you have to emergency service operators. Namola automatically geo-locates and identifies you, alerting emergency personnel of your situation with just one push of a button. Not only will response times be reduced, but users will have a dedicated support agent who will communicate either via a phone call or via a chat function, if the user is unable to talk. Users will also be kept updated on the progress of the emergency services to their location.

If traditional emergency service personnel are not available to attend to a request from a user on the Namola app, there’s Namola Watch. The company’s Peter Matthaei explains that it allows neighbourhood security companies and CPF groups to be included in the Namola network allowing them to respond to app requests. “If we can take all the community safety initiatives that are little cells in the body of South Africa and stitch them all together through Namola Watch we can have a safety net that spans the entire length and breadth of our beautiful nation and support all the citizens,” he says.

Namola Smart City is currently being developed, which will track the needs of a city and allow for better resource management. It will be trialled with certain local law enforcement agencies in the new year.

Partners with the app

Insurance company Dial Direct is the corporate national partner of the app and it is being publicised by its media partner SABC, primarily through Metro FM and SABC 3.

“Our public mandate stretches beyond just entertainment, to informing and educating them,” says acting group CEO Nomsa Philiso explaining SABC’s involvement in the project, “And when the opportunity arises to educate them on how to keep themselves safe, it is a natural fit”. She stresses SABC will throw all of its offerings behind the promotion of the app as it is very important for South African citizens.

Minister of Police Fikile Mbalula fully endorses Namola. He was supposed to attend the official launch but was called to a meeting in Cape Town by President Jacob Zuma.

Giving safety to the masses

The idea of Namola is to provide safety to the masses, not just the elite. Before it was officially launched, the app had already been downloaded over 85 000 times. “My message is, download the app, use it because it will save your life,” says Abramjee.

Here are some pics from the official launch event: