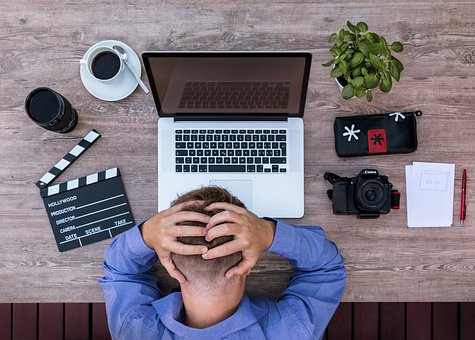 It seems that being good advertising people is not a prerequisite in media. We have become little more than audience traders and bankers. So, against this backdrop, where do we need to go? What is the future model? Will programmatic buying kill the media agency star, or is it business as usual with a bit of big data thrown in?

According to Clem Sunter, sound scenario planning should really be about “ready, aim, fire”, in preference to the American approach so favoured by Donald Trump. So, whether you believe in a scenario in which media agencies, like ants on a Mobius strip, can gradually evolve towards a new business model that reinvigorates their status in the communication industry, or that nothing short of an immediate quantum shift can save the day, you need to ask three questions:

As media professionals 40 years ago, we were part of a complex, holistic creative organism called an advertising agency. That we were children of a lesser god, is borne out of numerous salary surveys conducted at that time, which showed that media salaries lagged significantly behind creative equivalents.

It is from this cosmic soup of media dissatisfaction that the first independent media agencies evolved.

I argued at the time that media agencies were a wonderful development for advertising people who harboured a secret desire to work in the bank, and little has changed to alter that perspective. In fact, had you offered me then the prospect of churning out numbers and spreadsheets for the rest of my life, I’d have grown a ponytail and become a copywriter. The whole beauty of being in media in those days was that we had the best of both worlds. We were paddling in the waters at the confluence of the complementary streams of convergent and divergent thinking.

Where are we now? What has this evolution done to enhance advertising as an industry, and media as a discipline within that industry?

We could reference the 2016 K2 Intelligence Report, an independent study of media transparency prepared for the US Association of National Advertisers (ANA), in which it was found that non-transparent business practices, including undeclared rebates, were found to be “pervasive and systemic” across all types of media agency and all types of media.

K2 identified evidence of several methods by which rebate deals are structured, including “financial incentives in the form of cash or free media” and noted, “rebates are often structured as service agreements whereby the fees for the services, usually described as consulting or research, are tied to the volume of agency spend. Moreover, these services were either of minimal utility, significantly overpriced, or not provided at all”.

If anybody tells you that it’s not happening here in South Africa, then do not let them pass Go and make sure they don’t collect R200. If you’re a fan of Monopoly, then you know where that leaves them on the board.

Nothing, however, more clearly outlines where we are currently positioned as an industry, than the 2016 Hewlett Packard report on the Business of Hacking. 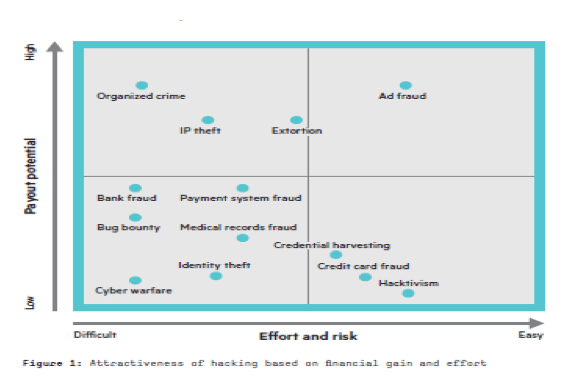 Yes, you are reading the graph, [above] correctly. Ad fraud has the same payout potential as organised crime, but it’s much easier to implement.

Indeed, many people would argue that ad fraud, which is defined as “deliberately attempting to serve ads that have no potential to be viewed by a human user”, is in fact little more than money laundering and merely a subset of organised crime.

It’s important to note that the implications and the practices outlined in the HP report are equally applicable to all media types, not just digital. Inflated viewership and listenership figures; laughable RPC (readers per copy) figures and unaudited circulations for print titles, all these have potential for abuse.

It seems that being good advertising people is not a prerequisite in media. We have become little more than audience traders and bankers.

So, against this backdrop, where do we need to go? What is the future model? Will programmatic buying kill the media agency star, or is it business as usual with a bit of big data thrown in?

There are six steps to get Back to the Future:

The question is not whether media agencies need to change the way they plan and buy media, but whether consumers have changed the way they consume media. It is no longer appropriate to plan media in silos. We need to go Back to the Future and start thinking like advertising agencies again. Media agencies must cultivate a holistic view of communication and that includes adapting and matching content to appropriate media environments, not just buying nominal impressions. It certainly means treating digital media as a permanent feature in our solar system, not some crazy asteroid that will sooner or later propel itself into outer space so that equilibrium can be restored.

Many media agencies have become little more than campaign implementers, selling gross impressions at discounted prices. This might keep procurement happy, but if media agencies cannot demonstrate how they contribute to clearly defined return on marketing investment outcomes, then they don’t have a place at the marketing dinner table.

Once the agency has clearly demarcated the value contribution they make to marketing communication, they can price their services accordingly and end the race to the bottom on pricing.

This may well imply a separation of church and state as outlined in the Loi Sapin introduced in France in 1993. Under Loi Sapin, media-buying agencies are not allowed to work as both the buyer and seller of advertising for their client. In other words, they can’t bulk-buy media inventory ahead of time and resell it back to their clients.

Loi Sapin also requires that the agency can only be paid by the advertiser and that it can’t receive rebates from a publisher or media owner. This is not to say that large audiences and marketing outcomes are mutually exclusive, but where media planning decisions are directed at optimising income for the agency, rather than outcomes for the clients, then the integrity of the decision-making is questionable.

The best way to eliminate this agency-centric media farming is by remunerating media agencies, either wholly or partially, based on campaign outcomes. It’s the quality of the thinking, not the size of the schedule that will make the difference to ROI.

Media owners can only sell what they can measure and so those with a vested interest in maintaining the big-audience status quo, will only measure what they can sell. Media agencies need to partner with marketers to take back control of media trading currencies through marketer funded media research and third party verification.

Media agencies will also have to prove competency beyond audience and currency measurement. Attribution modelling will ultimately replace traditional reach based planning techniques and this implies a shift from understanding large scale quantitative studies to real-time deployment of agile touchpoint insights. Media planning and econometric modelling will morph into a new discipline in winning media agencies.

The media industry needs to totally transform its perspective on training. We are currently training young people for jobs that simply won’t exist in two years. Don’t train agency people to do things that algorithms are already doing faster and more accurately. Teach them about what data should be fed into the algorithm and how to interpret and act upon the output to drive advertising ROI.

Simply put, we need to ensure that media people are once again transformed into good advertising people.

Ultimately though, advertising has always been an industry for grown-ups. You can lead people who need management, but you cannot manage people who want leadership. Winning media agencies will need to be advertising industry leaders and prove, once and for all, they are not still children of a lesser god.