LATEST NEWS
Home Out of Home Digital out of home: Media on the move, and growing fast

Digital out of home: Media on the move, and growing fast 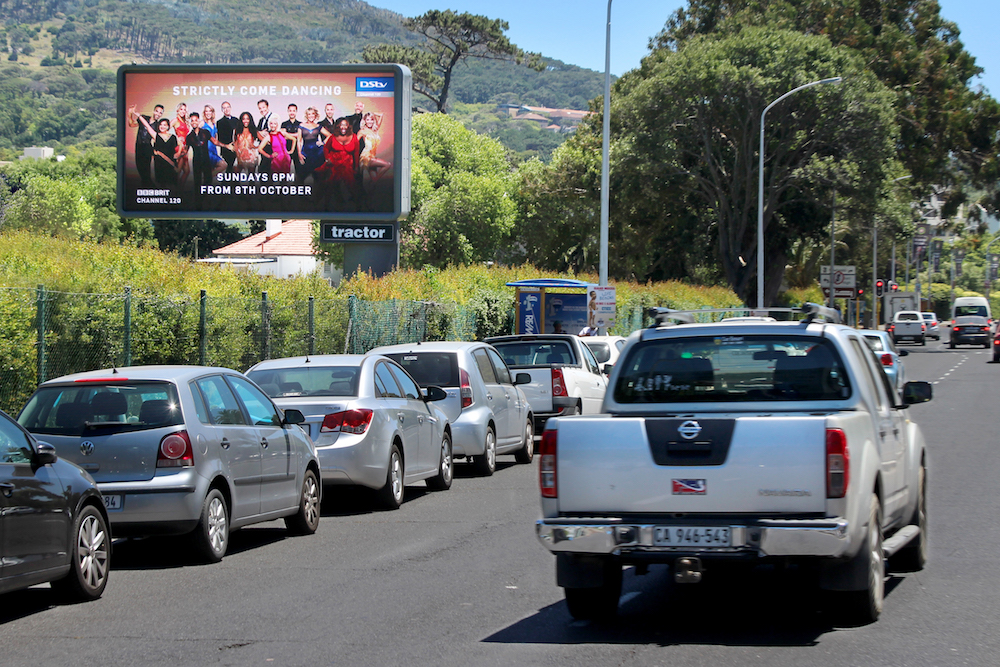 There’s no doubt digital out of home is a growing sector that is delivering returns to operators. But it’s a costly business, due to the rapid evolution of the technology used.

At least R10 million worth of digital out of home screen hardware alone was installed in the ground in every month of 2017.

Bruce Burgess, who recently left his position as managing director of Posterscope Sub-Saharan Africa, says that in the
core digital roadside billboard space, 13 media owners – four of them newcomers – increased panel count from 105 to 141 during the year.

This, he says, means that in a static market, digital out of home (DOOH) investment has increased. And when it comes to what he calls “alternative” DOOH spaces such as point of sale, taxi and bus ranks, stations, bars, retailers, gyms, and salons, the picture is even more impressive: 22 media owners (only two of whom were new to the industry), grew their DOOH networks by 20% to 16 472 (not including any first party digital networks).

Interestingly, says Burgess, a significant portion of investment in this category went into upgrading existing screens and reshuffling footprints, rather than just in expanding networks.

“This suggests the focus was on optimising audience delivery and network performance, which is more appealing to a client set that is increasingly looking to define and optimise ROI,” he says.

PricewaterhouseCoopers (PwC) valued South Africa’s out of home market – the biggest in Africa – at R4.4 billion in 2016, with a growth forecast of 2.7% over the next five years. In terms of DOOH, over a quarter of the country’s OOH revenue is now sourced via digital screens. “This proportion is set to rise to over 40% by 2021 as DOOH becomes ever more prominent in South Africa, generating revenue of R2.0 billion,” PwC reckons in its Entertainment and Media Outlook 2017-2021 report.

It’s a view strongly held by Provantage Media Group CEO, Jacques du Preez. “As it becomes increasingly challenging to reach today’s consumer in the fragmented media landscape, the effectiveness of digital out of home advertising has become more significant to brand marketers,” he says.

“People are driven and drawn-in by content; they are looking for entertainment and distractions from their day to day. Being able to offer an engaging touchpoint in unique, and at times, captive environments such as airports, commuter nodes or golf courses, presented a great opportunity for us to develop the extensive network to offer ad space,” he says. DOOH, in a way extends TV to the OOH space while still packing the emotive punch of TV, in terms of engagement and recall, says Du Preez.

Tractor Outdoor managing director, Simon Wall, says his business has committed to having at least 50% of their portfolio digitised by 2020, “so we have been very aggressive in seeking out key, iconic and strategic locations that complement each other as far as reach and targeting a specific geographic area are concerned”.

The company launched The Loop, Cape Town’s first digital city network that has locations in high-end, high-volume areas such as the Atlantic Seaboard, the central business district, and the southern suburbs.

Wall says the notoriously tricky City Council gave them their first approvals in 2016 and “since then we have been rolling out a number of digital sites in Cape Town and the outlying areas, as well as Port Elizabeth and East London”.

Provantage Media Group was an early adopter of digital out of home, says Du Preez. The company launched TRANSIT.TV back in 2007, and has expanded its digital footprint since then. As such, it remains the “largest operator of digital placed-based OOH networks on the continent with TRANSIT.TV, Airport.TV and recently Golf TV”. Du Preez says that across the various environments serviced, “we have more than 2 000 screens in market, and that expands monthly”.

That position comes with great costs, says Du Preez. “Our annual investment in DOOH is confidential but is a very substantial amount and we will aggressively grow our DOOH footprint in Africa,” he says. “As technology evolves, costs have come down from where they were a few years ago; however the technology still requires a substantial investment, in particular to offer dynamic and innovative solutions required by brands and marketers in today’s media mix.”

Commercial director of Massiv Media (previously known as Massiv TV), Gary Tilston, says the company mainly focuses on the urban transit scene. As such, its media platforms are “positioned in areas of high engagement, such as facing commuters, standing in a queue, in a taxi rank”.

Tilston says while the Massiv TV network in the taxis offers advertisers a captured audience, “we are somewhat restricted in terms of the number of trips a taxi can do in a day, and the number of passengers they can carry, which ultimately restricts reach”.

As such, by investing in the taxi rank environment, Massiv Media is able to reach a far greater audience in this economically active market. “As long as we continue to offer high quality screens and sound, that are positioned correctly, our research results show that the noting levels are as high as those of the TVs in the taxis,” says Tilston. To date, he says, the company has invested a ballpark number of just under R20 million.

“We have 17 large format digital screens in major taxi ranks, and a fleet of 790 Quantum taxis and buses with TVs. One of our projects for 2018 is to upgrade the screens in our vehicle fleet, and bring that number up to 1 000,” says Tilston, adding that the company has a local supplier who sources and supplies the best quality and value at the time of their order. “The quality has improved tremendously over the past few years and towards the end of 2017, we upgraded our entire screen network to new, much higher quality screens”.

Tractor has seven iconic locations across the country, with another 10 or so in the pipeline for this year. “We have been one of the first media owners in the country to install ‘P8’ (8mm) screens, which is currently one of the highest and most vivid screen specifications available for outdoor use in the country,” says Wall.

Du Preez stresses that the evolution of digital screens requires new investment – mostly abroad because unfortunately, he adds, this technology is not being produced locally. “We currently procure most of our hardware abroad, but we do source our software locally,” he says.

Wall says Tractor continues to invest “heavily” in research and development, and in human development too. “… we have spent a great deal of time in training and upskilling our digital operations team to ensure they are able to minimise downtime on these screens and ensure they are working at their optimal capacity all the time,” he says.

With such large investment required to stay ahead of competitors, is the growth of digital out of home impacting on the ability of smaller players to stay in the game?

“I think it is a prohibitive factor but identifying quality sites is really the key factor in justifying the investment,” says Tilston.

Wall says given that the “demand for digital screens is currently quite high, the rates are still at a premium, so there is still a space for smaller operators to offer reasonably priced static inventory at a different price point. Capex requirements can be a bit of a barrier to some operators playing in this space, but the rise of spend in DOOH has lifted investment in the sector, which is good for everyone”, he says.

Du Preez disagrees. “If you are an OOH media player and not yet in DOOH then you are in serious trouble. Digital out of home is a differentiator, and one which requires a high investment. This will lead to further consolidation in the OOH industry.”