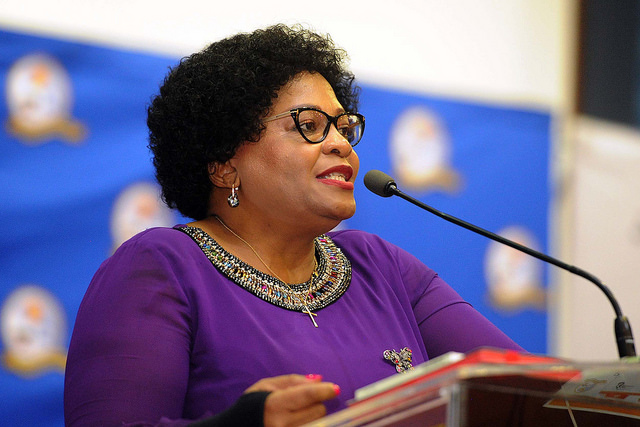 Communications Minister Nomvula Mokonyane says it is the responsibility of government and the media fraternity to contribute to the development of the country in achieving social cohesion and nation building.

“A truly transformed media can play a greater and more meaningful role in ensuring that citizens have greater access to information,” Mokonyane said on Friday.

Speaking at the University of Limpopo, Mokonyane told staff and students who are studying Communications that in South Africa the media is free to carry out its vital functions without fear or favour.

“Freedom of expression and freedom of the press and other media are enshrined in our Constitution. The Constitution also protects the freedom to receive or impart information or ideas, freedom of artistic creativity and academic freedom,” Mokonyane said.

She said a transformed media have a greater role to play in ensuring people make informed choices rather than acting out of ignorance or misinformation.

“Our transformation journey is about building on what we have and making it representative and relevant to a wider spectrum of society. It’s safe to say that there has been significant progress in terms of media transformation,” the Minister said.

Ownership, control of media a concern

However, Mokonyane expressed concern that the ownership and control of media still largely remains in the hands of a few.

She said the situation extends not only to media itself but across the entire value chain of publishing, printing, distribution, circulation, research and advertising.

“It simply cannot be acceptable that patterns of ownership across the entire value chain still remain largely unchanged 24 years into our democracy. I think more needs to be done by the media, both print and broadcast in South Africa to truly and meaningfully engage in fostering an inclusive and equitable growth and development,” Mokonyane said.

With regards to the new changes in the media industry, Mokonyane told the students that they have to be at the forefront of the change.

“The migration from traditional platforms undoubtedly has us all scrambling to remain relevant. These new platforms are also creating new opportunities in the media and technology space.

“As students of Communications and Journalism you have to be at the forefront on this change. You will be the brave pioneers who will lead our country into a new era,” Mokonyane said.

She said the explosion of online content and social media has created new jobs across the value chain.

Mokonyane called on the students to explore the many opportunities throughout government and at state entities for job opportunities.

“Whether it be as a spokesperson, a writer, journalism, public relations, radio, television, or web. I can assure you that a career in government will be both rewarding and challenging,” she said.

Touching on the new digital era, Mokonyane said it is incumbent upon all South Africans to see how to utilize the technological advancement to deal with the challenges the country is faced with.

“There is no doubt that the 4th Industrial Revolution will bring in massive change and opportunities to the way we work and build relationships,” Mokonyane said.

She told students to engage and relate to the new challenges to ensure that the digital divide between the poor and the rich, as well as between the first and the third world is minimised, if not completely obliterated.

The students invited the Minister to address them about opportunities available to them. – SAnews.gov.za